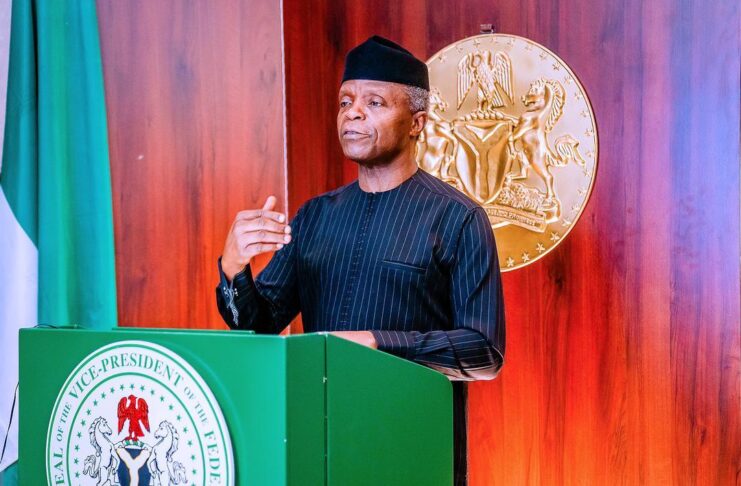 NIGERIAN Vice-President Yemi Osinbajo has proposed a Debt-for-Climate swap to promote climate-friendly actions across the globe.

Osinbajo made the call while delivering a lecture on energy transition in Africa in Washington D.C, United States.

He proposed that multilateral or bilateral debts could be waived on the condition that indebted countries show commitment to channelling debt service payments to national climate action programmes.

“Typically, the creditor country or institution agrees to forgive part of a debt if the debtor country would pay the avoided debt service payment in a local currency into an escrow or any other transparent fund, and the funds must then be used for agreed climate projects in the debtor country,” he said.

According to him, this could increase climate-friendly investments while reducing the debt burden in participating countries.

Osinbajo in the same vein urged African countries to participate more in the Global Carbon market while exploring financing options for energy transition.

“In addition to conventional capital flows both from public and private sources, it is also essential that Africa can participate more fully in the global carbon finance market. Currently, direct carbon pricing systems through carbon taxes have largely been concentrated in high and middle-income countries.

Speaking further, the Nigerian vice president urged developed countries to support Africa in its quest for a just transition, adding that developing nations were also faced with extreme poverty, which delays progress.

“The central thinking for most developing countries is that we are confronted on this issue of a just transition with two, not one, existential crises; the climate crisis and extreme poverty.

“The clear implication of this reality is that our plans and commitments to carbon neutrality must include clear plans on energy access if we are to confront poverty. This includes access to energy for consumptive and productive use and spanning across electricity, heating, cooking, and other end-use sectors,” he said.

Osinbajo had earlier called for collaboration in resolving energy and climate challenges in Africa.

During the virtual inauguration of Nigeria’s Energy Transition Plan in August, he said that Nigeria needs about $410 billion to meet its energy transition goals by 2060.