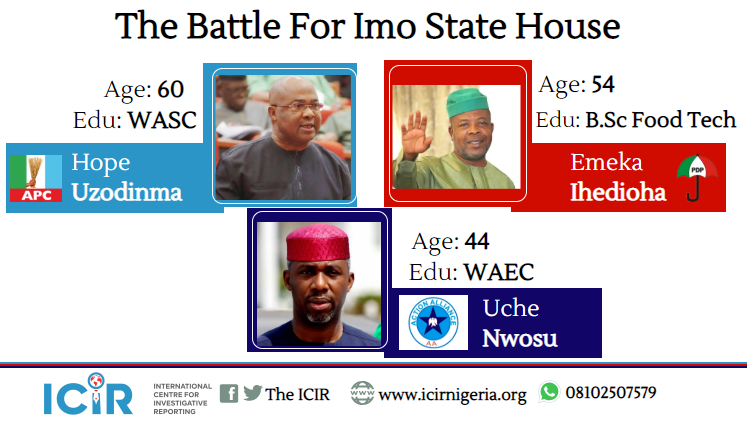 IMO State is one of the 29 out of the 36 states in Nigeria where the governorship and state assembly elections are holding today, March 9.

Seventy candidates are contesting for the coveted governorship position, but popular opinion has it that the contest is actually between three candidates namely, Hope Uzodinma of the ruling All Progressives Congress (APC), Uche Nwosu of the Action Alliance (AA), and Emeka Ihedioha of the People’s Democratic Party.

The ICIR in this report takes a looks at the profile and campaign promises of these three candidates among whom, barring any major upset, the next Imo State governor will emerge.

Popularly known by his chieftaincy title, ‘Ugwumba’ − meaning ‘the pride of the people’ − Nwosu was supposed to be a political neophyte having never contested for any elective position before now.

However, being a son-in-law to the current Governor of the State, Rochas Okorocha has made him one of the favourites in the race.

Born on August 8, 1975, Nwosu hails from Nkwerre Local Government Area of Imo State. His highest qualification, according to documents gotten from the website of the Independent National Electoral Commission (INEC) was a West Africa Examination Council (WAEC), even though, he claimed he had graduated with a degree in Urban and Regional Planning from the Imo State University in 2000.

Nwosu, who was Okorocha’s Chief of Staff before announcing his governorship ambition, dumped the APC in December 2018 when it became obvious that the party’s national leadership were not in support of his candidacy. He joined AA and was given the governorship ticket, but he continues to enjoy the endorsement and support of his father-in-law, Okorocha, even though the governor has won the Orlu Senatorial seat on the platform of the APC.

But in addition to the free education policy, Nwosu also promised to provide free internet for all state-owned schools, and that secondary schools would also get computers and internet facilities.

Asides providing world-class health facilities in Imo State, Nwosu pledged to provide free healthcare services for children between 0-5 years, pregnant women, and the aged of 75 years and above.

If he becomes Imo state governor,  Nwosu promised a safe, accessible and smooth transportation network. All the streets in Owerri, Orlu and Okigwe would be rehabilitated, he had said.

During a BBC Igbo governorship debate, Nwosu said he plans to create numerous employment opportunities for the youth, and that his administration will transform hundreds of young people into millionaires.

“Nobody, I repeat, nobody will be left out in the massive wind of empowerment that will blow across the land of Imo,” Nwosu boasted on his official Facebook page

On agriculture, he promised to make Imo State the food basket of Nigeria. Though he did not explain the exact policies his administration would adopt to realise these promises.

A new convert to the APC, Hope Uzodinma had been a PDP Senator from 2011 to late 2018 when he dumped the opposition party.

It is Uzodinma’s seat in the Senate that Okorocha will be occupying when the 9th Senate commences in June this year.

Like Nwosu, Uzodinma’s education qualification as listed on the INEC website is the West Africa School Certificate (WASC).

His vision is hinged on what he described as a tripod of recovery, reconstruction and rehabilitation.

Uzodinma is promising prompt payment of salaries and pensions so as to spur civil servants to greater productivity. He also promised to set up a staff housing loan scheme, vehicle advance and micro-credit scheme for tenure staff in partnership with mortgage banks and other financial institutions in the state.

The APC candidate says his administration would reconstruct the state’s educational architecture to focus more on science and technology in line with modern digital learning ecosystem of the 21st century. He promised to create a zonal technology incubation academy (ZOTIA) in the three zones of the state, while also providing digital teaching tools to primary and secondary schools in the state.

An Uzodinma governorship would restore sanitary health inspection in the 305 autonomous communities of Imo State to support primary healthcare delivery. Also, dilapidated community health centres and state-owned health institutes would be revitalised in his first year in office.

850 community health workers would be recruited to strengthen existing ones, modern laboratories constructed and diagnostic tools such as CT scan and mobile X-ray machines procured for better healthcare delivery.

Imo State, under Uzodinma’s leadership, will tilt away from a core public sector economy to one powered by a robust public-private partnership. He promised to engage more than 1000 graduates in his proposed entrepreneurship scheme.

He also pledged to improve the security architecture of Imo State by providing security agencies with the appropriate technology and modern digital tools for effective crime detection, surveillance, tracking and prosecution. It would be a “season of sadness” for criminals in Imo.

Born on March 24, 1965 at Mbutu Aboh Mbaise Local Government of Imo State, Chukwuemeka Ihedioha, had served as a member of the house of representative for three consecutive terms, from 2003 to 2015. He was the deputy speaker from 2011 to 2015.

Ihedioha, who holds a bachelor’s degree in Food Technology from the University of Lagos, is having his second go at the Imo State governorship seat.

Unlike Uzodinma and Nwosu, Ihedioha hails from the Owerri Zone of Imo State, an area that has never produced a governor since Nigeria’s return to democracy in 1999. This, many analysts say, may be an added advantage to his candidacy, especially given that Ihedioha’s major opponents are from the Orlu zone of the state, where the outgoing Governor Okorocha and former Governor, Achike Udenwa, also hail from.

His manifesto is based on a mantra of good governance, human capital development, integrated infrastructure development,  job and wealth creation.

Ihedioha has promised to rehabilitate and equip all general hospitals in Imo State, including the Owerri Specialist Hospital, as well as construct a new specialist hospital in Okigwe if elected. Also, pregnant women, under-five children, and the aged would be guaranteed free healthcare.

In order to boost the economy of Imo State, Ihedioha is proposing to establish 135 manufacturing industries, five in each of the 27 local government areas of the state.

He also promised to plant three million palms across the state in his first four years in office, while providing seedlings, fertilizer, planting and harvesting equipment to farmers in the state. Interested farmers would also be given special training on how agro-processing and exportation. Also, special focus would be on various rice-producing communities in the state for higher production.

In addition, markets will be expanded across the state and access to water and electricity will be bosted.

Ihedioha’s administration would massively retrain, re-orientate and motivate existing teachers in both primary and secondary schools while employing more qualified ones.

He promised to adopt a policy termed ‘Suo Igbo’, which is aimed at boosting the learning of the Igbo language and the usage of same for teaching and learning across the various levels of education.

Ihedioha also promised to revitalise the special schools for the handicapped so that persons with disability will be empowered with the necessary skills to ensure productivity.