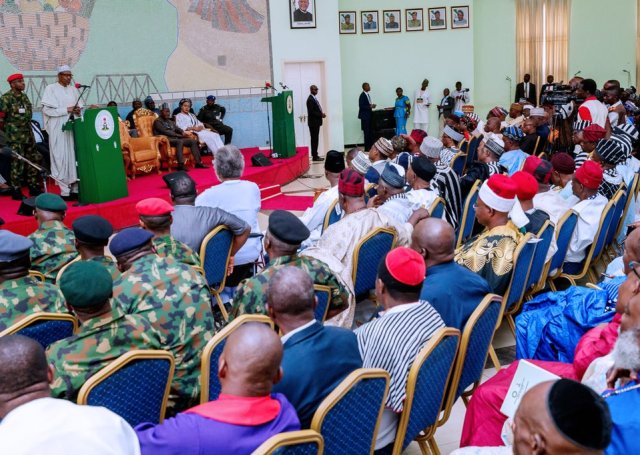 Femi Adeshina, Special Adviser to the President on Media and Publicity, says President Muhammadu Buhari is not omniscient and should not be expected to know everything.

He was responding to Buhari’s admission on Monday that he did not know that Ibrahim Idris, Inspector General of Police, flouted his orders to relocate to Borno State and quell the crisis there.

Buhari’s comments, which came during a meeting of stakeholders in Benue State on Monday, have generated lots of criticism from Nigerians.

“I’m not aware that the IG did not spend 24 hours in the state as directed by me, I am getting to know in this meeting,” Buhari said on learning that Idris did not spend up to 24 hours in Benue State after the presidential directive.

Speaking during a radio programme in Abuja on Tuesday, Adesina said that although the President has many channels via which he receives intelligence, he is not expected to know everything.

“It just tells you that the President is not omniscient,” Adesina said.

“As President and Commander-in-Chief, he has other channels, but it doesn’t mean that he gets every information under the sun.”
- Advertisement -

In February, Premium Times published a detailed report of how Idris had failed to carry out the directive given to him by Buhari. In fact, few days after Idris was ordered to relocate to Benue, he was pictured in his office at the Police Headquarters in Abuja, cutting a cake to mark his 59th birthday.

But Adesina insists that “even in the best countries in the world, the super powers, there still would be security breaches and failures”.

On the ongoing crisis in Plateau State where suspected herdsmen have reportedly killed several local farmers, with one of such incidents taking place during Buhari’s visit to the State, Adesina said the President should not be seen as “a knight in shinning armour” whose mere presence settles all disputes.

“The message it [the killings] sent is that security is a collective responsibility; it is no the responsibility of the President alone,” Adesin said.

“What Nigerians expect is that everything will flow from the top, which is not correct. It rather should even flow from the bottom up.

“What Nigerians expect is that the President would be like a knight in shining armour who comes to settle all security issues even in wards and villages and hamlets. No, it doesn’t work that way.”

Meanwhile, here are a few Twitter reactions on the recent development.

What manner of a President will give order to the IGP on January 9, only to be telling Nigerians on March 12 (2 months after) that he never knew that the IGP disobeyed his order? Does this President really know anything about happenings around him, not to talk about Nigeria?

As for @MBuhari, for crying out loud, what would it take for you to be more intellectually curious about what’s going on around you, ensuring every t is crossed and every i is dotted?
You Sir, have got to do much better.

im highly dissapointed in the President and his advisers and IGP or whatever he is. How can i be the chairman of a company and i wont deal with any worker that is disobedient.

The President need to know the level of Toxicity of the phrase “I’m Unaware of the whereabout of my IGP” especially coming from a President in the 21st Century, deep in the midst of iconoclastic Chaos across the nation. ????

Buhari (C-in-C) asked IGP to relocate to Benue. IGP left Benue after 1 day. From then till now, Buhari didn’t know. He confessed to that today. Not surprised. I’ve consistently argued, from when it took him 6 months to appoint dead woods as ministers, that Buhari is INCOMPETENT.

Buhari (C-in-C) asked IGP to relocate to Benue. IGP left Benue after 1 day. From then till now, Buhari didn’t know. He confessed to that today. Not surprised. I’ve consistently argued, from when it took him 6 months to appoint dead woods as ministers, that Buhari is INCOMPETENT.

He never knew his wife had long expanded her role beyond the other room (and I applaud her for this).

He never knew he could resign..

Buhari can not sack IGP Idris without consulting the cabal; they must discuss soft landing and other details of the sack if it will happen. Same thing that delayed Babachir Lawal’s sack ; they padded him NNPC contracts (the ones Kachikwu leaked) while he was being investigated.

Some months back, Ex SGF Babachir Lawal asked “Who is the Presidency”?

Today, we see the IGP flagrantly disobeying the order of President Buhari to relocate to Benue.

Is this the No-nonsense Buhari that was sold to Nigerians in 2015 or this is the Buhari from Sudan?