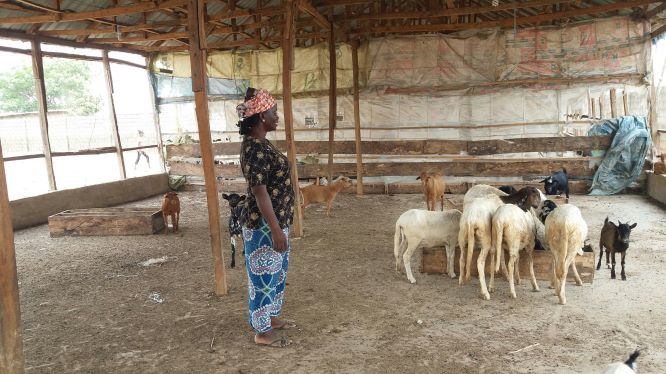 Facebook
Twitter
Pinterest
WhatsApp
DESPITE being close to the seat of power, smallholder women farmers in the Federal Capital Territory (FCT) are starved of  implements needed to drive their farming business, writes GRACE OBIKE

Rose Amaje, a fish farmer in Gwagwalada Area Council of the Federal Capital Territory, had a good time farming. Since her husband’s retirement from the civil service, her family had used proceeds from her farming business to take care of their needs, and life could not have been better. They even built more ponds and started breeding catfish eggs for their ponds.

Sales also got better, and business boomed so much so that they sometimes had as much as about 3,000 matured fishes in a pond at a time. That was until recently when water scarcity hit Abuja, ruined everything for them, and she was left with no other option than to start hawking food on the street alongside her teenage daughter.

Scarcity of water hit the FCT in March due to repair works carried out on the trunk line at the lower Usuma Dam Water Treatment Plant 3 and 4 in Ushafa. Its effect was severe. Residents, who could not afford to buy the water they need for domestic use from water peddlers, resorted to fetching unhealthy streams and waterholes.

The water scarcity’s effect was so catastrophic in Gwagwalada Area Council to the point that 20 litres gallon of water that used to sell for between N20 to N30 was sold for as high as N100. Eventually, the devastation hit hard on a few small businesses in the vicinity.

But if smallholder women farmers like Rose in Gwagwalada suffer from a man-made water scarcity problem, others face another kind of water challenge arising from the effects of climate change – inadequate rainfall. This is the biggest problem faced by many of these farmers, some of whom are frustrated out of the farming business. 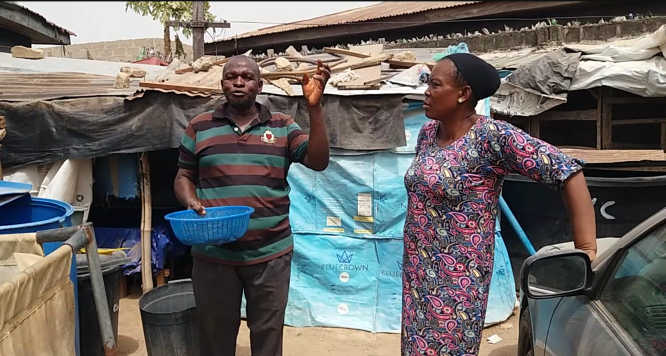 Justina Ihenewengwa, a yam, cassava and maize farmer in Kwali Area Council, explained that one of her greatest challenges is insufficient rainfall. According to her, the amount of rain in Kwali is low compared to other parts of Abuja.

“Rain does not fall in Kwali as much as it does in some parts of Abuja. Sometimes, the rain starts here in May. Three years ago, it came in May, whereas, last year, it started in April. When it does, it sometimes gets suspended and returns until the ending of July, and that affects our crops as maize plants will turn yellow.”

She said adding to insufficient rainfall is the huge invasion of herdsmen and cattle that usually destroy their crops. Ihenewengwa said one major way that government can alleviate the suffering of farmers in the FCT is to develop realistic policies that will curb the menace of the rampaging herdsmen and their cattle.

Rebecca said she ran to the leader of two Small-scale Women Farmers Organisations of Nigeria (SWOFON) groups, Mrs. Justina Ihenewengwa, in Shadda for help. There and then, they gave her a loan of N150,i000 at a 5% interest rate. And that’s how she was able to pay her sons’ fee and also bought an engine she now uses to blend tomatoes and wet beans for her neighbours at a price.

Ihenewengwa explained that she manages two SWOFON groups in Shadda, under which they contribute from N500, N1000 to as much as N40,000 weekly. It is from this money they give loans to needy women amongst themselves. She said they often give members up to N500,000 at a modest 5% interest rate.

The Federal Government said it is trying to remedy the situation by creating the Nigerian Gender Policy, which will mainstream its policies, plans, programmes and projects; and build institutions to promote the activities of women in the sector by providing female farmers with accessible and affordable technology in all areas of agriculture and access to critical resources like land, capital, credit, farm inputs, technology, water and extension services, preservation and storage, markets, etc.

On the 24th of June, 2020, the Federal Government came up with the Nigerian Economic Sustainability Plan (NESP). It was a 12-month, N2.3 trillion “Transit” plan to provide succour to farmers to achieve the cultivation of between 20,000 and 100,000 hectares’ new farmland in every state. It was also meant to support off-take and agro-processing, with low-interest credit in the agricultural sector and other sectors of the economy, to reduce the added hardship caused by the COVID-19 pandemic. 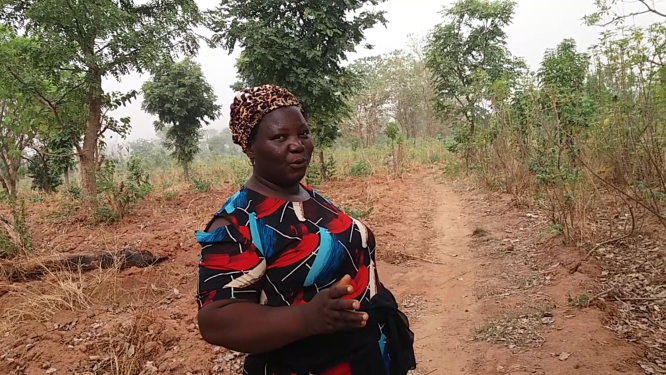 Also, in August 2020, Vice President Yemi Osinbajo confirmed, during a webinar organised by the Lagos Chamber of Commerce and Industry (LCCI), that the FG had started its implementation.

The Central Bank of Nigeria (CBN), Bank of Agriculture (BOA) and other financial institutions are also offering incentives. But according to SWOFON, all of these incentives do not give enough consideration to women farmers, whom the organization estimates make up 70% of the agricultural labour force.

According to SWOFON’s statistics attributed to the Budget Office of the Federation, in 2019, the capital allocation and releases to the Ministry of Agriculture and Rural Development was a total of N107,218,344,102, and of this, only N3,999,647,612 (3.73%) was allocated to activities that have to do with women farmers.

Worse still, this allocation was not only for women farmers but also catered for capital allocations directed at youths. From the breakdown of these activities, of the 65 activities laid out by the government in different states and published by SWOFON, about 53 related to training and capacity building for women and youths, with only about 12 activities being agricultural materials or equipment needed.

Last year, women under SWOFON, took a bold step when they insisted that they were tired of using outdated farming equipment like cutlasses and hoes. They strongly demanded gender-friendly equipment.

In December, the women led by the National President of SWOFON, Mary Afan, said the use of hoes was no longer productive and sustainable.

She added that their action was to retire the hoes to the museum knowing fully well that a museum is a place for artefacts since the need for a mechanised method of farming was imperative for Nigerian women who suffer and sweat on the farm every day to till small portions of land to feed themselves and the nation.

In Abaji, Hannatu Solomon said that farming with a hoe is physically draining.

“I come down with severe back pain. So, I joined the protest because the difficulty I face farming with a hoe is too much. Using hoes is not easy. Life would have been easier for me if I had access to tractors, garri machines and other tools. We have been speaking to the FCT government on these things, but they asked us to fill forms. We did, and even after we did that, we never heard from them till date.”

Ihenewengwa, in agreement with Hannatu, said for her at 62 years of age, farming with a hoe is posing a danger to her health. 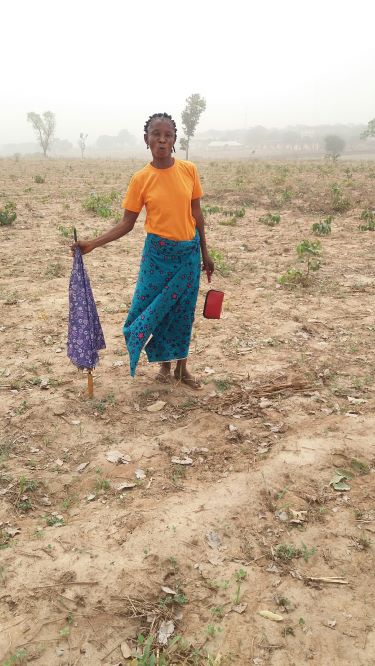 In Abaji Area Council, Hannatu Solomon said she pays security men monthly to guard her less than a hectare of land. This is apart from the yearly N150,000 she pays as rent. She recalled a horrible experience of previous years. She said she had planted yam and harvested about 100 tubers, and she hoped to use the proceeds to buy a motorcycle so the stress of walking to the farm or paying commercial drivers to carry her produce can be reduced.

Comfort Omoh’s effort at securing her farm is even more dramatic. For the native of Edo state, she spends nights on her farm in Kuchiguyi, especially on rainy days, when the weather gets too cold for the birds in her poultry to prevent another loss.

Omoh noted that a few weeks earlier, when the first heavy rains fell in the area, she visited her farm in the morning only to discover that she had lost about 10 out of her 200 birds which were just a few weeks old. She noted that the heavy downpour brought down the trampoline she had used to cover her partially built poultry, drowning some chicks.

On poultry production, Omoh and Abigial Bako from Jiwa Community in the AMAC Area council observed that the price of feeds and day-old chicks is discouraging.

“It is so bad to the extent that I am yet to restock since selling all my birds in December,” Bako said.

To make life easier for poultry farmers in the FCT, Omoh advised the government to set up hatcheries and feed manufacturing plants.

The Public Relations Officer (PRO) of the FCT Agricultural Secretariat, Zakaria Aliyu, explained that the office has sensitised women farmers on the Accelerated Agricultural Development Scheme coordinated by the CBN in collaboration with the area councils.  He said the Minister of State for FCT, Dr. Ramatu Aliyu, and the Federal Government have, over the years, put in place a lot of programmes aimed at empowering women in Agriculture.

He said 50 women farmers were trained on fishery and aquaculture, 1,000 from the six area councils were trained in poultry production, and each was given 40 birds and two bags of feeds. Also, he said the animal and husbandry department has also organised women, livestock farmers into cooperatives, trained them on hygienic practices in milk and dairy products and distributed free of charge pursue storage bags to some women farmers to help address post-harvest losses.

The Direction of Information, Federal Ministry of Agriculture and Rural Development, Theodore Ogaziechi,  said it was not in the place of the Federal Government to carry out enumeration of smallholder farmers within states. “That is the job of state governments,” he stated.

“The federal government is thinking of procuring heavy-duty equipment to help in tilling, clearing, planting and harvesting. This will be done by making them form clusters; there’ll be those handling the equipment so women can hire and pay a token. The government will also help them during the sales by procuring the yields that will be stored up in silos,” he said.

This report was made possible with support from The ICIR and the International Budget Partnership (IBP).