How I escaped Owo attack – survivor 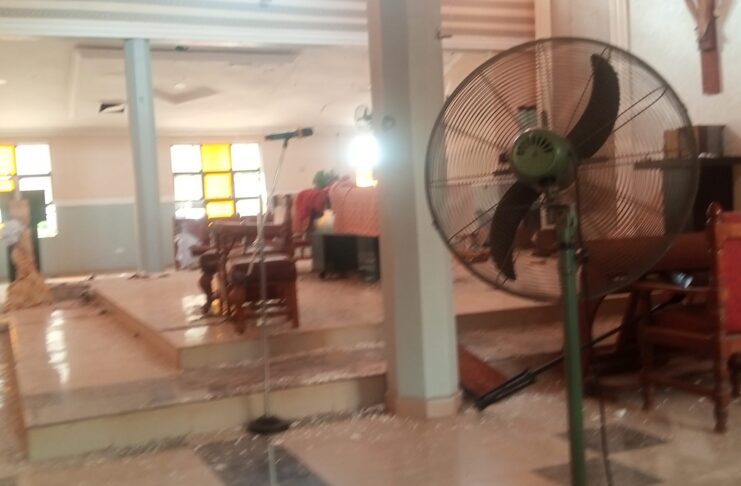 A survivor of the attack on worshippers at St. Francis Catholic Church, Owo, Ondo State, on Sunday, Ugweze Victor, has told newsmen a personal account of how he escaped unhurt.

The ICIR had reported that the attack happened on the church premises just after mass was ending.

A footage showed gory images of dead people, including children and women, victims of the attack.

Catholic Diocese reacts to attack on worshippers in Ondo

In an interview, Victor said the morning’s ceremony had begun when some undesirable elements threw explosives into the church while raining bullets on the congregation.

He said, “As I got to church this morning, the father (Reverend) was in the building when these Boko Haram people came inside. They came around throwing bombs and shooting as well. Then members of the church started running away. They shot at some of them on their legs, shoulder, and legs.”

Victor narrated that he ran away the moment he heard the guns blazing.

He added, “The priest was not kidnapped. When I returned, I saw some people lying down and others rallying for help. I saw more than 55 people taken to the hospital and the people who died were about a 100.”

VIDEO: Eyewitness gives an account of the Owo church attack in Ondo. pic.twitter.com/s9vuvTdWLw

In a statement released by Buhari’s Special Adviser on Media and Publicity, Femi Adesina, the President asked emergency agencies to swing into action.

“President Buhari mourns the dead and sympathises with their families. No matter what, this country shall never give in to evil and wicked people, and darkness will never overcome the light. Nigeria will eventually win,” the statement read.

The Catholic Diocese of Ondo, in a statement, said that the identity of the perpetrators of the attack is unknown.

The Ondo State Governor, Rotimi Akeredolu, who immediately flew into the state from Abuja and headed straight to the attack scene, has vowed that the assailants would pay for the crime.

“I just arrived Owo from Abuja following the unfortunate attack on the people worshipping at the St. Francis Catholic Church in Owo.

I have received briefs from the Heads of Security agencies in the state. The assailants will be hunted down and they will pay for their crimes,” he tweeted.

I just arrived Owo from Abuja following the unfortunate attack on the people worshipping at the St. Francis Catholic Church in Owo.

I have received briefs from the Heads of Security agencies in the state. The assailants will be hunted down and they will pay for their crimes. pic.twitter.com/qIiydy2nh4

Meanwhile, several persons on social microblogging site, Twitter, have sought a donation of blood at the Federal Medical Centre Owo, Ondo State, where some of the victims were admitted.

If you can donate blood, please you're needed in Federal Medical Centre Owo, Ondo State.

Doesn't matter what your blood group is. If you're close… please give the gift of life.