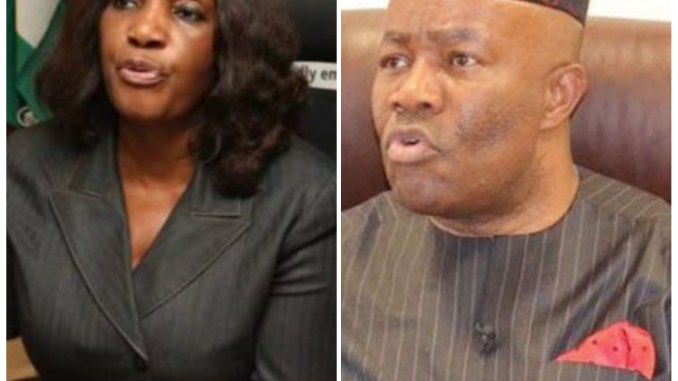 Speaking during an interview on Arise News Morning Show, Nunieh disclosed that the incident happened at the minister’s guest house in Apo, Abuja.

In a video clip of the interview, the former NDDC managing director stressed that she was the only woman that slapped the minister because he thought he could come upon her.

“Why did he not tell Nigerians that I slapped him in his guest house at Apo? I am the only woman that slapped Akpabio. He thought he could come up on me. He tried to harass me sexually,” Nunieh said.

“I slapped him. He tried to come on me. I am an Ogoni woman and nobody jokes with us. I showed Akpabio that Rivers women do not tolerate nonsense.”

She also accused Akpabio of trying to inflate the NDDC budget by instructing her to include some projects from the refugee commission in the budget of the NDDC.

“How do you tell me to put some of their projects in the NDDC budget when we have so many things to do in the Niger Delta? How do you explain that?”

Following the investigating on the alleged mismanagement of N40 billion by the Interim Management Committee (IMC) of the NDDC, Nunieh and Akpabio have made series allegations against each other sequel to the activities of the senate ad hoc panel.

Akpabio had previously told the panel that he had no knowledge about the expenditure of the NDDC under Nunieh because she refused to brief him.

But while refuting the allegations, Nunieh stated that the minister facilitated her removal for refusing to obey his illegal instructions.

“When we first came to the NDDC, on the day of going for the inauguration, he told me in the car that Madam MD, If you don’t do what I say, the same pen which I use to sign your letter, it will be the same pen I will use to remove you,” she had said.

Nunieh also alleged that Akpabio asked her to implicate Peter Nwaoboshi, chairman of the Senate Committee on NDDC, remove all directors who refused to follow his instructions, sack the head of the legal team who is from the north and also change the dollars in the NDDC account.

Again, NDDC scholars hold protest in UK over non-payment of…