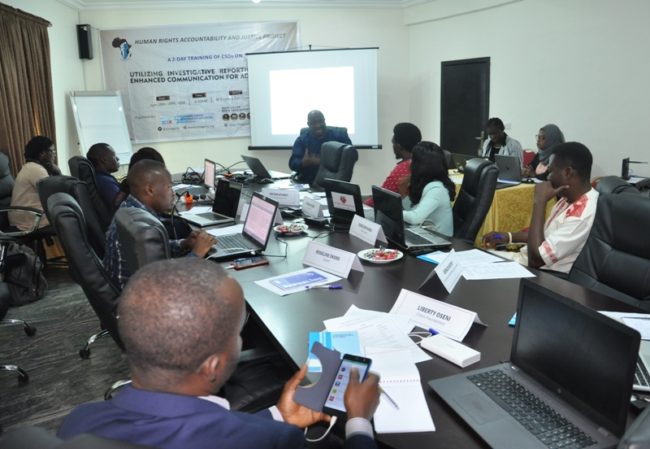 THE International Centre for Investigative Reporting, (ICIR) has organised a two-day training for civil society organisations on how to utilize investigative report to enhance communication for advocacy.

The training is one of the activities on the project Voice for Change Africa which was  put in place in collaboration with the Institute for War and Peace Reporting (IWPR).

The event held at AES Luxury Apartments, Abuja, on Thursday and Friday, 28th and 29th June 2018 was designed  to build the capacity of human rights defenders, civil society groups and journalists to work together in order to effectively raise public awareness and launch robust advocacy campaigns related to human rights violations that are crimes under international law and that remain uninvestigated and unprosecuted, such as extrajudicial executions and unlawful killings, forced disappearances, sexual violence, and torture and ill treatment of suspects and detainees.

The training  sought to build the capacity of the CSOs on how to work with independent media to advance evidence-based advocacy and effectively engage the broader public in their efforts to bring pressure to bear on decision makers responsible for justice and accountability.

Ojo trained participants on the role of the media in human rights and justice accountability campaigns, how the newsroom works, developing content for the media, developing advocacy plan, and understanding media products.

Ajala on the other hand  illustrated with practical examples the strategic ways of using social media tools and mobile devices for messaging, leveraging new media for human rights and justice accountability campaigns while  Aiyetan explained how CSOs can amplify investigative reports produced by the media.

A participant, Wilson Atumeyi of Connected Development, described the programme  as “interesting and educative” and promised to share  the skill learnt with his colleagues.

“I had a great time and hope to put into use everything I have  learnt,” said Adeboye Adegoke of Paradigm Initiative.

Other participants such as  Gerald Kachy of OCDR  and Roseline Okoro of  LDAP also expressed satisfaction with the training.

Before the next massacre…