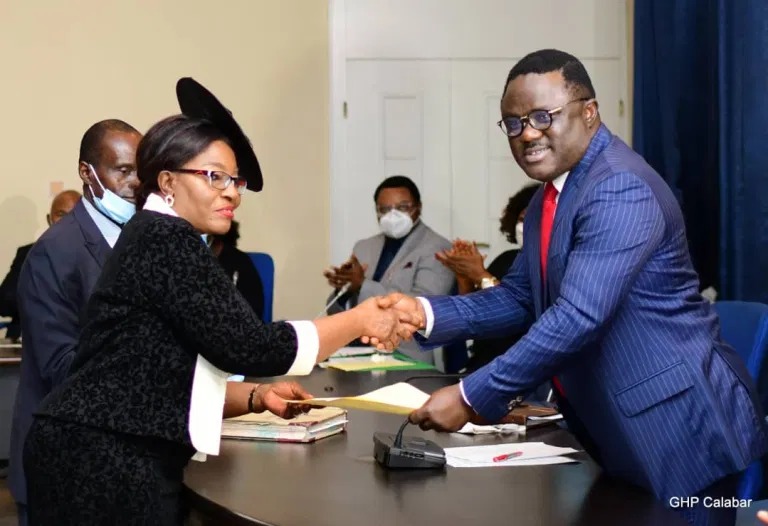 AKON Bassey Ikpeme has been sworn in as chief justice of Cross River State after many months of protests by civil society organisations (CSOs).

Ikpeme, a native of Akwa Ibom State but married to a citizen of Cross River, was rejected twice by the Cross River House of Assembly over what the legislators described as a ‘security threat’ to the state.

Her rejection drew public condemnation both from National Judicial Council (NJC) and CSOs, with the Nigeria Bar Association (NBA) calling on the NJC to compel the state government to do the right thing.

Her nomination was rectified and confirmed by the legislature late last month after allowing two of her junior colleagues to serve in acting capacity for about one year.

Governor Ben Ayade, state governor, who administered the oath of office on her at the government house, said the exercise had brought an end to the internal crisis created by the judge’s initial rejection.

”Today brings to an end the internal concerns of Cross Riverians as it concerns the stability of our Judiciary,” he said.

“God has chosen a woman and not just a woman of God but a covenant child. She is here at the right time and she is the right person for the job. We must put behind all the challenges in the process of getting back here.

“God touched my heart and the heart of every other person in the decision-making process. It was God that fought your fight and not any man,” Ayade said.

In her speech, Ikpeme said it was with deep appreciation that she thanked God who rules in the affairs of men.

“It is with deep appreciation in my heart that I want to thank God who rules in the affairs of men, who has made this day possible.

“God uses men to fulfil His purpose. I also thank His Excellency, Prof. Ben Ayade, from the depth of my heart, for making this day a reality. In my interactions, I have discovered that he is very humane.

“I want to assure His Excellency and Cross Riverians that the Judiciary under my watch will collaborate with other arms of government to move Cross River State forward.”

Olumide Apata, president of the NBA, who described the swearing-in ceremony as a fitting climax to a long process, expressed delight that the judge became the CJN of the state.

” We are extremely delighted that Justice Akon Ikpeme has finally been sworn in as the chief judge of Cross River State. It is a fitting climax to a long process. In life, the problem is not that there are challenges but what is, however, important is how effectively we are able to solve them,” he said.

“I am glad that between the dramatis personae we have been able to come to this fantastic outcome … and so at the end of the day, all is well that ends well,” Akpata further said.

“Democracy runs on three arms of government, that tripod, and they stand independently, but they must also collaborate for democracy to succeed. She is inheriting a judiciary with issues. I am praying that Lord will give her the strength and have the wisdom to navigate the stormy waters and I expect her to work effectively with other arms of government, but she must uphold the independence of the judiciary which is critical.

“We will continue to stand on the right side of the law, justice and constitutionality and so we are happy, the NBA is satisfied with the outcome, we cannot rest on our laurels, and we will make sure we will continue to do what is right,” he added.

Chat us on WhatsApp
Advertisement
Previous articleEducation in Nigeria, the poverty of pedagogy and its discontent
Next articleCBN’s diaspora remittance policy and how Nigerians are reacting