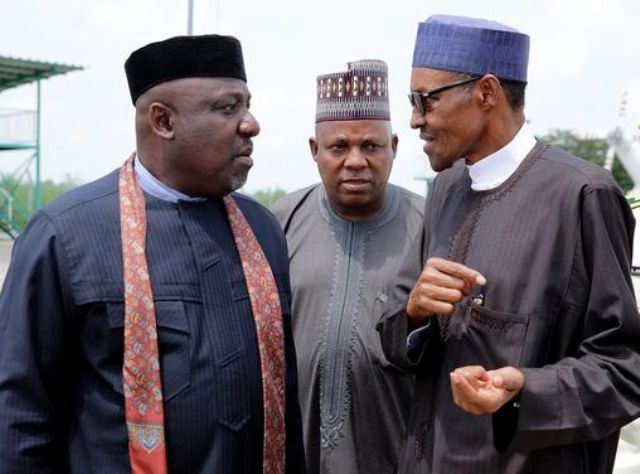 Rochas Okorocha, Governor of Imo State, says he will only give up his presidential ambition if President Muhammadu Buhari decides to seek reelection in 2019.

Okorocha said this at the National Executive Council (NEC) meeting of the All Progressives Congress (APC), which held in Abuja on Tuesday.

“If Mr. President wants to run for election, he will follow all the processes and if he is the person, we will all support him. In APC, there is no imposition of candidate,” Okorocha said.

“If Buhari is running, I will allow that man to continue but if he is not running, I won’t sacrifice my Presidential ambition.

“Mr. President is showing the right leadership and taking the very right steps and there is reconciliation going on even with nobody talking about it. There is the spirit of reconciliation and people understand their role.

“Our role is to make this party great and we are all trying to do that; but importantly, the governors have remained the pivot upon which this wheel of change has rotated so far.

“We have kept this party working and after this meeting, our congresses and convention will commence in the early part of next year and all party organs will be strengthened. We are in good mood and high spirits.”

Okorocha has been in the news recently after he unveiled a statue in honour of Jacob Zuma, President of South Africa.

Zuma was conferred with a chieftaincy title and the highest merit award in Imo State, while a street was also named after him.

The move earned Okorocha more condemnation than applause, as Nigerians wondered what Zuma did for Nigeria or Imo State to merit such humongous honour.

But Okorocha explained via a statement by his Chief Press Secretary that the decision to honour Zuma was part of efforts by his administration to attract more international attention to Imo State.