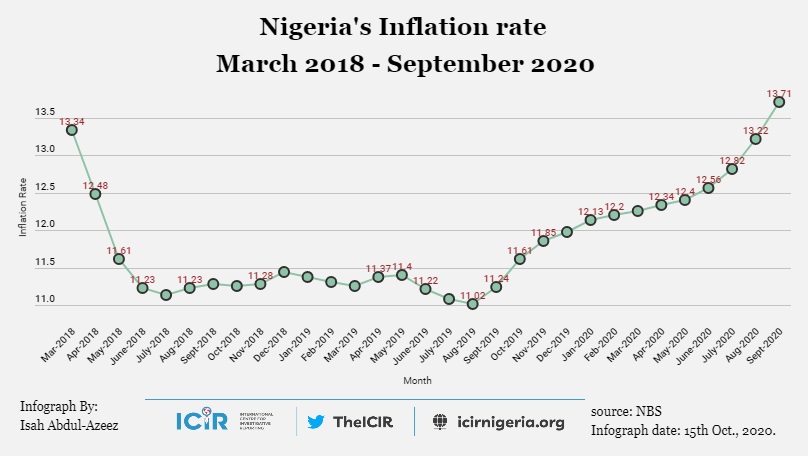 NIGERIA’s inflation rate for September has peaked at an all-time high rate of 13.71 percent in 31 months, according to the Consumer Price Index (CPI) data released by the National Bureau of Statistics (NBS) on Thursday.

The CPI measures the average change over time in the prices of goods and services consumed by people for day-to-day living.

The composite food index rose by 16.66 percent in September compared to 16 percent in August. According to the report, the rise in food inflation was caused by increases in prices of bread and cereals, potatoes, yam, and other tubers, meat, fish, fruits and oils, and fats.

On a month-on-month basis, however, September 2020 food inflation was highest in Zamfara-3.65 percent, Anambra-3.19 percent, and Kaduna-3.15 percent, while Nasarawa-0.51 percent and Abuja-0.15 percent recorded the slowest rise with Ondo recording price deflation or negative inflation (general decrease in the general price level of food or a negative food inflation rate).

Seyi Kolawole, a Finance and Research Analyst with the NASD Security emphasised that the primary cause of inflation could be related to the border closure.

“The shutting down of international borders which has made us rely on only the goods we have internally is the major cause. This is due to an increase in demand which outweighs supply,” Kolawole said in an interview with The ICIR.

He added that fuel price is one of the key metrics for Nigeria’s growth and increased fuel price will definitely impact the common man.

Kolawole said the fuel price influences transportation cost and as such, an increase in the cost of transported items.

The Federal Government on October 14, 2020, placed a full ban on the importation of goods through land borders. Consequently, this made the local demand for goods that come in through the land borders to outweigh the supply.