MAKKAH Eye Specialist Hospital Bauchi, owned by Saudi Arabia-based Albasar International Foundation, was established in 2009 as a non-profit social service outfit providing treatment to patients with visual impairment and other eye problems, supposedly at affordable prices based on the vision of the hospital.

The Vision of the organization as captured on its website among other things is “to provide therapeutic preventative and educational programs to manage blindness and visual impairment in developing countries on a regional and international scale through non-profit social services to help the less privileged”.

However, a two-month investigation by WikkiTimes reveals that the hospital has deviated from its creed of affordable healthcare, and is now charging clients three times the amount in similar private institutions. There are also allegations of maltreatment of patients seeking medical help and systematic disengagement of indigenous staff on frivolous allegations, even as the investigation uncovered how the hospital shortchanged the Bauchi State Government in tax revenues for six years.

The exhaustive investigation has documented several harrowing experiences of patients who consult the facility and the high cost of services and medications offered by the hospital when compared to other health facilities in the state. For instance, Musa Haruna, a glaucoma patient, recounted how one Dr. Zulfikar Ahmed Abbasi, a Pakistani expatriate Consultant Ophthalmologist rained insults on him for his inability to keep his scheduled appointment with the hospital.

“I added about three days to the time that I (was) supposed to return for other rounds of medical check-up and drugs; I explained to him that my inability to come back was because I don’t have money,” Haruna lamented; adding that “He (Dr. Abbasi) lacks human relations such that he cannot draw you as patient closer to him to give you advice on what you need to do. He only shouts on us”.

Three different staff of the hospital in separate interviews with WikkiTimes have all testified of how doctors of the hospital consistently insult, bash and on many occasions beat patients even at the point of surgery. Dembo Musa (real name concealed to protect the staff from possible backlash from the hospital’s management) told WikkiTimes that Dr. Abbasi has earned notoriety for beating, touching female patients inappropriately during examinations and making derogatory remarks.

Another staff of the hospital who spoke on anonymity confirmed that the doctors are usually intolerant with their patients and use harsh words on them when they make the slightest unintentional mistakes, such as wrong sitting arrangements.

“Whenever a patient mistakenly fails to act the way they instructed them, you will see them insulting or beating the patient sometimes. We are not pleased at all; anytime patients complain to us about the habit of the doctors, particularly older patients that are supposed to be handled with care and patience,” the unnamed staff said.

High Cost of medication and other services

Although the hospital is supposedly a non-profit making entity, it has steadily over the years raised its prices for consultancy and treatments by far higher than other healthcare centres rendering the same services, in spite of the fact that it enjoys several privileges that other privately-owned hospitals in the state can only wish for.

In 2009, when Makkah Eye Specialist Hospital first commenced operations, the fee for registration and consultancy was pegged at N300 but today it is N1500, witnessing about 400 percent increase. Other price surveys conducted showed that while the Progressive Lens +2 addition 250 is sold for N8,000 at the Bauchi State Specialist Hospital, N9, 000 at Madina Optical and N15,000 at the Abubakar Tafawa Balewa University Teaching Hospital Bauchi (ATBUTH), the same lens sells for a whooping N35, 000 at the Makkah hospital.

Our investigation further reveals that the hospital has over the years embarked on systematic disengagement of at least 24 indigenous staff who either protested against some of the inhumane bizarre conduct of some of the doctors or have demanded improved salaries and entitlements, allegedly citing trumped-up charges.

For instance, in a suspension letter obtained by this medium, Ikirama Abdullahi, a Bauchi indigene who was employed as a cashier of the hospital in July 2017, was abruptly suspended indefinitely on the basis of loss of cash receipt booklet which was in his possession without recourse to due process or fair hearing. When Abdullahi’s lawyer reached out to the hospital pointing out that his client had been suspended for misplacing a single cash receipt leaflet and not an entire cash receipt booklet as alleged in the suspension letter to him dated 9th day of December 2019; demanding them to rescind their position within seven days or face legal action, Abdullahi was reinstated.

He was, however, redeployed to serve as a security guard manning the hospital gate, a decision that forced him to resign. He alleges that his request to get his outstanding 10-month salary amounting to about N300,000 fell on deaf ears as the hospital outrightly refuses to oblige him and life has not been the same for him as he struggles to cater for 10 dependents, including his wife and child.

In a similar style, Umar Faruk, a clinical staff of the hospital, was illegally disengaged. He told our reporter that “when it was evident that I became critical of the hospital’s management in fighting for the rights of the indigenous staff who are consistently maltreated in the hospital, I became the target of the management. Faruk was eventually slammed with an indefinite suspension for allegedly trying to interpret a patient’s test result to her in the ward after he was spotted by the hospital manager. 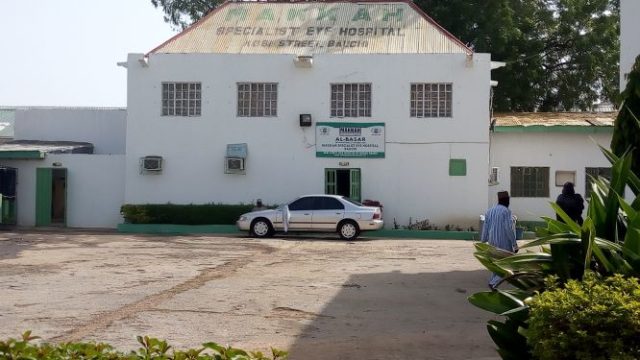 How the hospital shortchanges government in Tax

Makkah Eye Specialist hospital is not only notorious for exorbitant medical services, dehumanizing treatment of patients and disengaging its indigenous staff; the hospital has also shortchanged the Bauchi State Government in tax for up to six years. Expatriate doctors of the hospital have their monthly salaries paid in two unequal separate installments, with the higher amount being tax-free, thereby shortchanging the Bauchi state government. For example, Dr. Zulfikar Ahmed Abbasi in September 2019, was paid the sum of $1,125.51 and $ 3,376.53 in two separate payment vouchers but only a paltry sum of $156.93 was remitted as tax to the Bauchi State Government. Similarly, another expatriate doctor, Kamran Siddiqui, received $ 1,313.60 and $1970.40 as salary for the month of August 2016, but only the smaller amount was taxed.

Our checks further revealed that this practice is exclusive to the expatriates working at the hospital who are paid in hard currency; the indigenous staff has their entire salaries taxed. Through this unprofessional accounting practice, the hospital has succeeded in denying the state government hundreds of millions of naira. A source at the Bauchi Inland Revenue Services who is not authorized to speak to the press confirmed to our reporter that the Makkah Specialist Hospital has earned a bad reputation for shortchanging the state government in taxes, and estimates that “withholding tax alone when tabulated could exceed N200 million”.

A freedom of information request sent to Bauchi State Inland Revenue Service by this medium dated 16th November 2020 was ignored as at press time.

However, a source at the BIRS who does not want to be named because he was not authorized to speak to the press on this matter, disclosed that relevant taxation laws operational in the state did not exclude profit or nonprofit making organisation from paying tax to the government. He said outfits that make a profit are also charged taxes on their declared profit made from the services rendered or commodities sold out to customers.

Speaking further, he said relevant taxation laws did not spare any income paid to all workers—indigenous or expatriate from remitting tax to the government. “All income paid to expatriate staff of an organisation are taxed. If payment is made to them in USD, the tax will be deduced in USD and if they are being paid in naira, the tax will be collected in naira as the case apply,” he explained.

According to our source, in the event that the employer failed to deduce tax as it applied from the remunerations of staff, the tax authority will confront the employer for such payment at a later date with penalties for not remitting the taxes as at when due. He added that a department known as Tax Audit and Investigation has been established to detect and identify defaulters and met appropriate sanctions on erring organisations.

When contacted for a response to the allegations of maltreatment of patients by doctors at the Makkah Eye Specialist hospital, the Bauchi State Commissioner for Health, Dr. Aliyu Maigoro, could not keep his promise to grant an interview and clear the air on the petition sent to his ministry by a staff of the hospital Umar Faruk who raised several allegations against the foundation.

Responding via a text message sent to him after several unanswered calls, Dr. Maigoro said: “My doors are open for clarification on any allegation in my ministry, I have nothing to hide, please. I’m only working to serve the good people of Bauchi. You may book an appointment in my office through the secretary on workings days.”

Two separate visits to the ministry on working days to get the ministry’s response to the allegations did not yield positive result, as the Commissioner was not on the seat and when our reporter eventually met Dr. Maigoro at the Bauchi government house and reminded him of the need to clear the air on the allegations, he promised to respond, but later reneged.

However, a human rights activist, Mr. Mbami Sabka Iliya, when contacted on why government officials appear reluctant to quickly address petitions or public complaints tabled before them, said: “they ignore most of the complaints due to their corrupt tendencies. Sometimes, some of them aid and abet such crimes, and that is why no matter the complaint, they tend to ignore them.”

Manager of Makkah Eye Specialists Hospital Bauchi, Mr. Abdullahi Badamasi, while reacting to the allegations raised against the hospital disclosed that an audit carried out by the Bauchi State Inland Revenue Service found the hospital culpable of the allegation bordering on tax evasion and has reached an agreement with management to pay the unremitted taxes, as well as fines imposed in installments.

Badamasi added that findings from an investigation into the allegations levelled against Dr. Zulfikar Abbasi, found him guilty of some of the charges and that management has been advised to redeploy him outside of the state.

In his words: “I have recommended that Dr. Zulfikir be transferred to Kano because he is too old and as I speak to you now, he is not in town. He used to be a little bit aggressive to patients. We are trying to see that he resigned voluntarily; it is not as if the management is aware and has done nothing.”

The Hospital Manager, however, defended its exorbitant cost of treatment and drugs, arguing that the foundation was operating as a “self-sustaining charity” and has to generate revenues for its survival. On allegations bordering on the alleged unlawful disengagement of indigenous staff, Badamasi said all disengaged staff were found wanting for various offences. He also denied that the hospital has entered into an agreement with the State Government to hire and train indigenous staff, insisting that “an NGO will never go into an agreement with anybody committing itself to employ people of the state. If you look at it with common sense you realise that it is not possible”.

Over 300 people ‘mysteriously’ died in Azare within 14 days