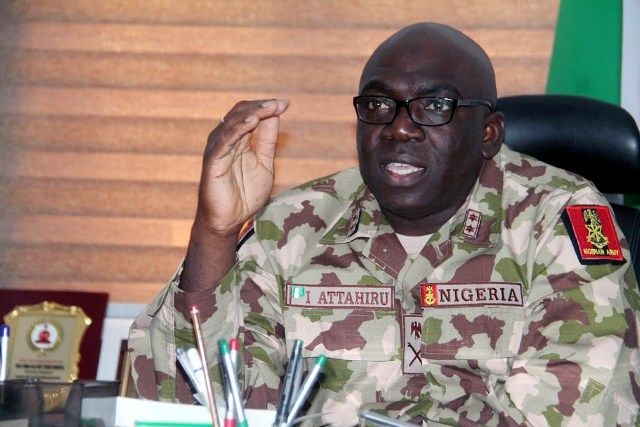 THE Nigerian Army has punished a senior journalist Amadin Uyi for asking questions on how it spent allocations on armaments and other logistics for the prosecution of war against insurgency and related security threats facing the nation between 2015 and 2019.

Peeved by Uyi’s ‘irrelevant questions,’ the  Army’s public relations department removed him from a WhatsApp platform where it shares information on its activities with journalists.

Apart from being the most reliable platform for journalists covering the Army to obtain and confirm information, the platform has the contacts of all spokespersons of the Army divisions and its main spokesperson at the headquarters, Mohammed Yerima, a brigadier-general.

Yerima was appointed the director of information of the Army on February 9, 2021, taking over from Sagir Musa, a brigadier general.

News-Central TV, where Uyi serves as its Abuja bureau chief, however, stands by its reporter and calls on the Army’s leadership to answer the questions raised by the journalist.

In a statement mailed to The ICIR on Friday April 2, 2021, the television station says  Amadin Uyi is an award-winning journalist who has covered the Nigerian military and defence operations for close to a decade. “He has an uncanny knack for investigative reportage and is not known for asking frivolous questions,” his employers add.

As an investigative journalist, Uyi was with the CNN team that broke the news of Chibok school girls kidnap in 2014. He worked with etv South Africa as its Abuja reporter, A24 media based in Kenya and was a content producer for Germany-based Ruptly.

He was a pioneer member of staff of Nigeria’s first 24 hours based television: NN24 TV; had stints with We FM, Silverbird television and headed Plus TV Africa northern operations for three years.

Uyi’s ‘irrelevant questions’ bothered on recent statements made by chief of Army staff Ibrahim Attahiru, a leutenant general,  at a press conference where he promised to “work towards addressing logistics challenges” for his personnel.

“The senior reporter requested an explanation of this statement, considering that about N2.6 trillion had been spent between 2015 and 2019.

“With such a huge amount expended within the period, #AmadinUyi also questioned the COAS’s remark that directives had been given for ‘more weapons to be procured,’ when the initially disbursed funds could have purchased enough armaments.

“Because the public will want details, Uyi also asked if the army had previously abandoned the damaged and unserviceable equipment in the theatre of war, after the COAS talked about back-loading them and instructing that they be repaired immediately.

“Rather than address these concerns to satisfy public curiosity and accountability, the Nigerian Army Public Relations Unit simply took #Amadin Uyi off the platform after challenging him for asking what they described as ‘irrelevant questions,’” News-Central TV states.

While noting that Uyi has since his removal from the platform conducted himself with utmost professionalism, the TV station creates the hash tag #QuestionNoBeFight #JusticeForNCReporter #AmadinUyi #FreedomOfThePress @NewsCentralTV to raise global awareness to the action of the Army.

Shortly after the former chief of Army staff Turkur Buratai alongside his counterparts in the Air Force Sadique Abubakar and Navy Ibok-Ete Ekwe Ibas as well as the chief of defence staff General Gabriel Olonisakin resigned on January 26, 2021, after illegally overstaying in office, the national security adviser Babagana Munguno alleged that billions of naira allocated for arms could not be accounted for under Buratai’s watch.

He later denied the confession, saying he was misquoted.

Buratai, and the other retired military chiefs, who have been confirmed ambassadors by the Senate despite agitations by Nigerians,  also denied mismanaging arms fund.

During his first tenure, President Muhammadu Buhari administration’s much-hyped anti-corruption campaign was largely hinged on $2.1 billion misappropriated arms fund claimed to have been spent on re-election bid of former President Goodluck Jonathan in 2015. No major convictions have been made in the trials involving officials who were fingered in the crime.

In 2017, the Federal Government resolved to release one billion US dollars from the country’s Excess Crude Oil account to fight insurgency in the country, despite allocating the largest chunk of the nation’s yearly budgets to security.

Reports also indicate that soldiers fighting insurgents desert warfronts because they are ill-quipped to face ‘superior’ firepower of the terrorists.

The ICIR had, on March 26, 2021, reported how soldiers in terror battleground protested poor equipment, unpaid salaries in Borno State – the epicenter of terrorists attacks in Nigeria. The report followed a similar one published on July 2, 2018, where mobile policemen in the state protested against unpaid six months allowances.

Nigeria has been faced with insecurity challenges comprising insurgency, banditry, kidnapping, among others, in the past decade, amidst other socio-economic challenges threatening the continued existence of the nation.

Though the nation’s military has recorded victories over the insurgents in recent times, banditry and kidnapping, which are considered internal security issues, have snowballed.

Chat us on WhatsApp
Advertisement
Previous articleNgige threatens striking doctors with ‘no work, no pay’
Next articlePROFILE: Yinka Odumakin’s many years of activism, Yoruba advocacy