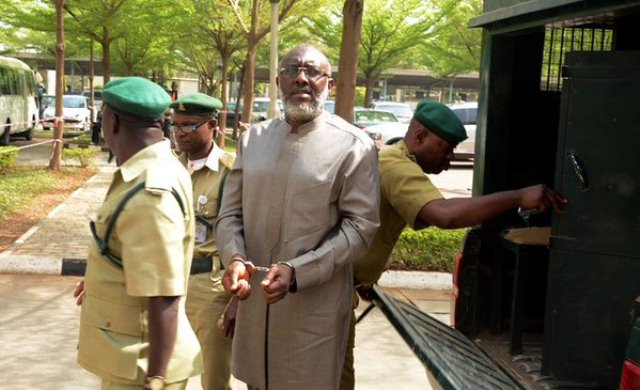 The trial of former National Publicity Secretary of the Peoples Democratic Party, PDP, Olisa Metuh, continued on Thursday with a defence witness telling the court that the N400 million which Metuh was accused of collecting from former National Security Adviser, Sambo Dasuki, was actually disbursed as directed by former-President Goodluck Jonathan.

The witness, Richard Ihediwa, was led in evidence by the counsel to Metuh, Emeka Etiaba, SAN.

He narrated that N21 million was paid to former PDP Chairman, Tony Anenih, for a property acquired for use by the party as its media intervention centre.

He pointed out that although the property, which is situated in Asokoro area of Abuja, did not belong to Anenih, he assisted the PDP media team headed by Metuh in securing it.

“The amount covered the cost of hiring the structure, utility vehicles as well as security gadgets at the centre,” Ihediwa explained.

He also told the court that various sums of money were paid to some groups coordinated by some government functionaries, including the late Oronto Douglas and Abbah Dabo.

The witness said he was not very certain about the amount released to late Douglas, but noted that N25 million was released to Dabo as mobilisation fee for advocacy groups, in line with the directive.

Ihediwa said the former president also approved different amounts for some other groups and Metuh disbursed the funds to them accordingly.

He said because of the tension and high level of insecurity across the six geo-political regions of the country then, there was the need for government to mobilise various advocacy groups to stabilise the system.

Meanwhile, the trial judge, Okon Abang, has reserved ruling for November 15 on applications filed by the defence counsel.

Chat us on WhatsApp
Advertisement
Previous articleAkwa-Ibom Gov.Sacks 5000 Teachers Employed By Akpabio
Next articleGov. Wike, Others Must Guarantee Peace For Election To Hold – INEC