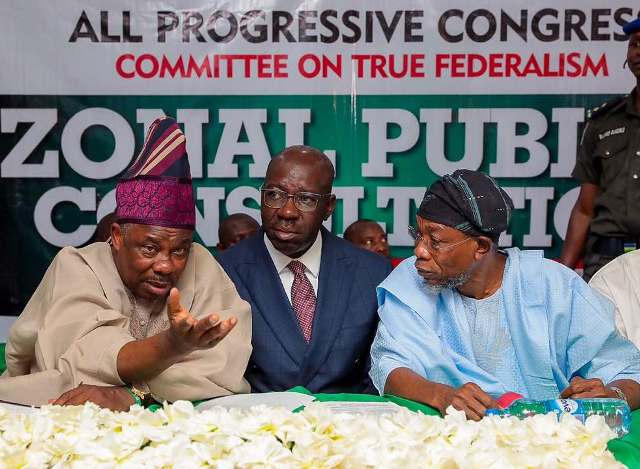 Sanusi’s epistle for Atiku, Tinubu, others

Why there is apathy to TETFund conference support funding in Academia

Unarguably, the burgeoning conversation in the Republic revolves around who occupies Aso Rock in 2019, and the need to resolve the lingering ‘national question’, loosely referred to as true federalism or restructuring. The latter issue, which predates the subsisting Republic, will be the focus of this piece.

While the President dismissed the agitations for restructuring in his New Year speech, his party appears to be saying another thing in line with the agitation from the political society. The report of the Nasir el-Rufai Committee on restructuring says it all.

On this note, it is safe to conclude that the inconsistency between the party and the presidency is a clear case of working at cross purposes. Before we delve into the crux of the matter, historicizing how we got here would not be out of place.

THE FEDERAL ARRANGEMENT AS IT WERE IN NIGERIA

Federalism is an institutional mechanism adopted in governing societies that are culturally plural. Since Nigeria fell into this category, the introduction of federal system became necessary when the Richard Constitution of 1946 was drafted by the British. Experts on federalism, such as Simeon and Conway, posit that federally-structured polities “seek to maintain the unity of the larger state, while giving recognition and empowerment to the minorities”.

Also, “it is predicated on devolving autonomy to the minorities, and on recognizing and protecting them in the large society and polity”. As against the El Dorado that is being painted today of the First Republic, unity was a rarity as a result of majoritarian hegemony that brought about cultural exclusion.

Nnoli and Coleman have extensively elaborated on this in their works – Ethnic Politics in Nigeria and Background to Nationalism. Recognition and empowerment to the minorities was also lacking. For this reason, the demand for separate political entity from the marginalized groups assumed centre stage. However, in the area of fiscal autonomy, the situation was better both in colonial Nigeria and the First Republic. Preponderance of the centre over the regions was not witnessed.

This engendered healthy economic competition as each region focused on what it had comparative advantage on. The North focused on groundnut, tin, and columbite. The West did well with cocoa, while the East produced palm kernel. Given the degree of autonomy, inter-governmental relations between the centre and the regions was horizontal, not vertical and contentious as we have it today.

Revenue allocation during this period was based on the principle of derivation, which was introduced by the colonial government – Philips Commission of 1951 – and was maintained by the independent government. Fifty percent of revenue from sale of natural resources went to the regions of origin. If 50% was going to the regions at some point, why is it now 13% to the oil-producing states? Nothing explains this better than “military federalism”.

Military interregnum and the Civil War badly affected the practice of federalism in Nigeria. First, it started with Ironsi’s unification Decree No 34, which abolished the autonomy of the regions in a misguided attempt to forge a greater national unity. While Gowon returned the country to the old order of federalism, he introduced the command structure of military in governing the federation.

He introduced Decree No 27 of 1967, which limited the legislative and executive powers of the newly created states during the Civil War to residual matters. Decree No 51 and 38 of 1969 and 1971 vested the monopoly of oil wealth and distribution in the federal military government. This move effectively introduced centrist federalism, which has been variously described by experts as unitary, command, quasi, or militarist federalism. Instead of reviewing the centrist clauses, which would have given full autonomy to the federating units, subsequent institutional designs – 1979, 1989, 1995, and 1999 – all maintained the status quo such that the 68 items have been placed in the exclusive legislative list.

In the absence of a mutually acceptable constitutional arrangement that would have engendered a workable political society, the resultant effect has been protracted armed conflict in the Delta region and agitations for political inclusion from both the hegemons who felt excluded and the minority groups. All of this make up the national question.

The President feels that the problem is more with the process than the structure. This position of his, which is common with the oligarchs, has created some disquiet and dissonance in the polity; and rightly so.

Protagonists of restructuring feel the current structure of governance is essentially faulty. In his view, Ahmed Joda suggested that the 109 senatorial districts be converted to federating units. According to him, this would contain agitations and reduce the incurable cost of governance.

He’s right in the area of reducing the cost of governance. But as brilliant as his view is, implementing it without giving the newly created federating units autonomy will still not solve the problem. It’s like the current order where the central government exercises too tight a control on the states. Again, how this would solve the problem of local hegemons lording over the minorities is still missing.

Emeka Anyaoku’s prescription insists on a return to the regional order of the First Republic, because the current structure of governance cannot advance economic development. He feels the 36 states should be collapsed, and turned into six geopolitical zones. While the economics of his argument is sound like Joda’s, how this will solve the problem of ethnic rivalry experienced in the First Republic is also missing.

The issue of majoritarian hegemony, which led to agitation for separate political entity by the minority groups, is likely to become an issue. On his part, the literary icon, Professor Wole Soyinka came up with the concept of “reconfiguring”. What that means, as far as I understand it, is best known to him. Former Vice President Atiku Abubakar, who suddenly became a federalist, has also called for stronger state governments.

No matter what side of the divide one belongs to, it’s an incontrovertible fact that the current order of federalism, which the President has defended, cannot guarantee political stability, which is essential for economic development. Given our pluralistic nature, addressing the lingering national question with the aim of bringing about an enduring governance structure is a sine qua non. Responsibilities have to be devolved to the federating units in line with the principle of federalism.

The el-Rufai Committee on restructuring has made the right move. But considering how the APC government has failed Nigerians who trusted it with their lives, can it be trusted?

Aside Boko Haram where the government appears to have recorded piece meal success, which seems to be eroding with the Haramists launching offensive attacks, the government has not delivered on the campaign promises that endeared it to most Nigerians. How sure are we that it will implement the outcome of the el-Rufai Committee report if voted back to power in 2019; especially when the President thinks restructuring is not the issue – a view shared by most oligarchs? This makes it hard to deny that the report of the committee is only targeted at winning the 2019 general election, after which it would be abandoned like the Ken Nnamani Electoral Committee report.

It is also important to note that while some have applauded the el-Rufai Committee report, some of its recommendations are just not feasible given the current economic situation. Take for instance the issue of state police. While that would help in dealing with crimes at the sub-national levels, the economic reality is that most state governors cannot afford it. The issue of non-payment of civil servant salaries explains it all.

Another thing is, we must not continue to rely on the demanding process of constitutional review to make the practice of federalism work. At some point, we can also utilize the power of judicial review as Lagos State did last year in a matter with the Federal Government over who controls inland waterways, which it won.

Lastly, while we restructure either through constitutional engineering or judicial review, we also need to take seriously the important issue of state building. This is so because federalism does not work on its own. It has to be grafted to the institution of the state. That is why no matter how good the structure of federalism, it needs a strong state to function effectively.

Therefore, if the state is weak the possibility of the architecture of federalism functioning effectively can hardly be reconciled. My prescription for building a strong state is in line with the one provided by Francis Fukuyama, which focuses on creating new government institutions and strengthening existing ones. Nigeria needs this for its federal democracy to work. Let the restructuring debate continue.

Ihembe is a political scientist with research interest in political development. He can be reached on 08023688848

Chat us on WhatsApp
Advertisement
Previous article
We have scientific evidence that APC will win 2019 election, says el-Rufai
Next article
One ship, two captains… Odinga declares self president of Kenya