Many Feared Dead In Anambra Stampede 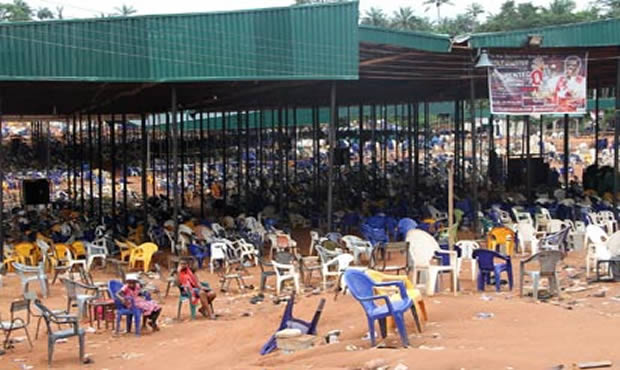 The Holy Ghost Adoration Ministry, organises a weekly crusade at the ground which is usually attended by hundreds of worshippers.

Being the first Saturday in the month of November, the programme promised to be special and it attracted more worshipers.

However, they got more than they bargained for as stampede, the cause of is yet to be determined, led to the death of many, bringing the program me to an abrupt halt.

The police public relations officer for the state command, Emeka Chukwuemeka, said the casaulty figure cannot immediately be ascertained, but reports say at least 23 had died and another 100 injured.

“The number of deaths cannot be ascertained now until we conclude investigations because some persons who fainted were later resuscitated,” Chukwuemeka said.

He said investigations have begun into unravelling the cause of the incident.

Meanwhile, the candidate of the opposition Action Congress of Nigeria, ACN, for the November 16 governorship election, Chris Ngige, has blamed governor Peter Obi and his party, the All Progressive Grand Alliance, APGA, candidate, Willie Obiano, for the incident.

Ngige said that reports reaching him indicate that “the APGA campaign train went to the Adoration Ground at Ukeh and induced stampede as Obi’s goons charged at worshipers who booed at them for campaigning at the Holy ground.”

Reacting to the incident, however, governor Obi who expressed shock over the incident, promised to set up a panel of enquiry to determine the immediate and remote causes of the stampede.

He also promised to take care of the medical bills of the victims.

Covid-19: How a major industrial unrest was averted at NAUTH, Nnewi

VIDEO: I can get a person jailed and throw away the keys,…