Melaye: Cocaine is the passion of some people, collecting automobiles is mine 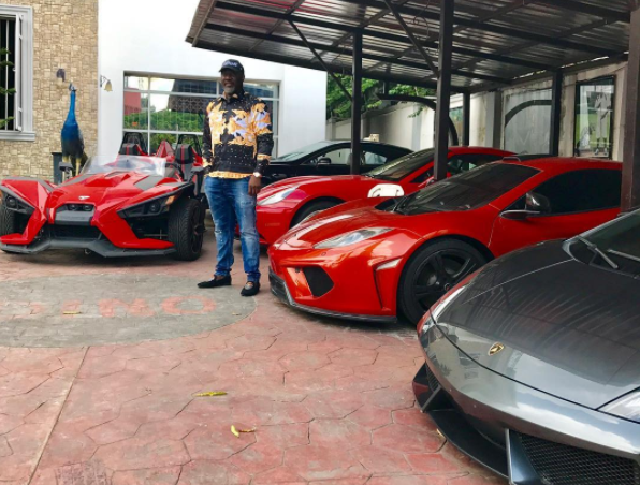 Dino Melaye, the controversial Kogi State senator, says some people have passion for cocaine or blood or diamond, but his is collecting automobiles.

Melaye, a self-acclaimed anti-corruption campaigner, said this during an interview with The Punch, adding that he has no regrets about his love for cars.

He also said that his presence in the Senate had brought lots of relief for ordinary Nigerians, as he has sponsored over 30 motions and bills, most of which have created numerous opportunities for the common man and led to the recovery of billions of naira to government coffers.

“The truth of the matter is that my coming to the National Assembly is for service. I am here with a vision and a purpose, which is to make sure that we right the wrongs in the society,” Melaye said.

“I want to be the voice of the voiceless and speak for those who cannot speak for themselves. These are the principles behind my coming to the National Assembly.”

On the number of bills and motions he has sponsored, Melaye said: “To the glory of God, I have over 30 motions, which is unprecedented in the history of the National Assembly.

“Some of them are landmark motions that have created a lot of opportunities, while billions of naira have been recovered and returned to the government coffers.

“I moved the motion on the Treasury Single Account, which has led to the recovery of huge sums from unauthorised sources and taken to the government coffers. Even the percentage that the agency, Remita, was taking was reduced from five per cent to one per cent; and this is a considerable reduction.

“I moved the motion on MTN and how trillions of naira, through capital flight, left this country.

“I moved a lot of motions, including that of the Secretary to the Government of the Federation (Babachir Lawal) that led to his eventual suspension and sacking.

“Two of the bills have been passed into law while 13 have passed through second reading, which are either waiting for public hearing or third reading. I have another 10 that have crossed first reading and are now at second reading.

“They include that of facial mutilation (tribal marks) and the one seeking a stateless Nigeria; that instead of having states, which promotes disunity or having state of origin, we should have state of residence. The bill is awaiting second reading.

“I brought a motion that led to the revolution in the Ministry of Works, which has led to the massive construction of roads in this country.

“I brought a motion on Nigerian roads and specifically elucidated the road from Kabba (Kogi State) to Ilorin (Kwara State) and that of Kabba to Obajana. The Dangote (Cement) has agreed to start the construction of one of the first concrete roads in Nigeria with the Obajana-Kabba road and the work has started.

“Also, by the grace of God, my motion got the Kabba-Ilorin road into the budget last year and this year. It is one of the priority roads that the Federal Government is attending to.

“In fact, the contract for the construction of that road has been ratified by the Federal Executive Council and N21.6bn has been approved for the Kabba-Ilorin road.”

Melaye is popular for flaunting his fleet of exotic cars on social media and he says he has no regret about it.

“I don’t see it as a weakness. Every human has a passion for something. My passion is collection of automobiles.

“I love automobiles and I have no regrets about it.”

Asked how his new book – Antidotes for corruption – has fared since its launch in May, Melaye said he has been smiling to the bank as a result of the book’s reception around the world.

“As I speak to you, I have sold over 100,000 copies. I travelled recently to Germany and I took 500 copies along with me. I have been called that the copies have been exhausted.

“I went to Russia with 100 copies. As I speak to you, they’ve all been sold. I sent 1,000 copies to the United Kingdom; they’ve been completely sold. I sent 2,500 copies to five states in America and they are still demanding more.

“I want to believe that it has been properly received. Within the country here, I have also made huge sales. I am laughing all the way to the bank.”