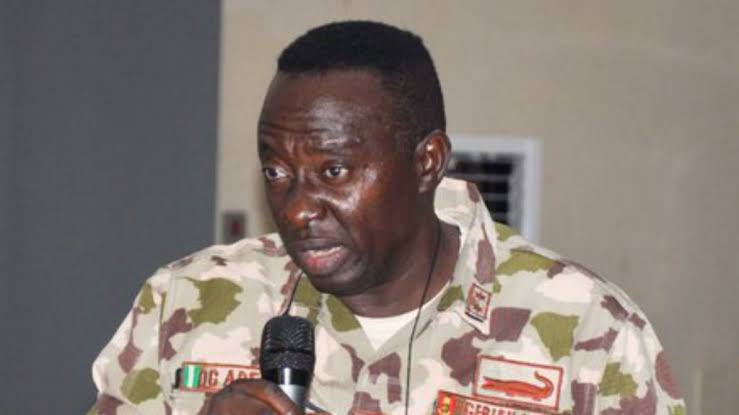 
AN Abuja military court has demoted Olusegun Adeniyi, a former theatre commander of Operation Lafiya Dole, by three years for producing and publicizing a video that embarrassed and ridiculed the Nigeria armed forces.

According to The Punch, Adeniyi was convicted on Monday after he was found guilty of violating Section 15 (g) of the policy of the Nigerian armed forces which forbids personnel from posting on social media “any video, audio, materials pictures during exercises/operations.”

The report further stated that Adeniyi’s orderly, Tokunbo Obanla, a private, was also found guilty and sentenced to 28 days in jail with hard labour.

In March this year, Adeniyi was seen in a viral video urging military authorities to supply them with weapons and accurate intelligence to combat the ravaging Boko Haram terrorists in the northeastern region.

He was seen in the videos that were widely circulated on social media giving a situation report to the Chief of Army Staff, Tukur Buratai, a lieutenant general.

He blamed the deadly attack his troops suffered on “very wrong intelligence assessment” earlier conducted before they deployed.

“Since yesterday we have been met with very strong resistance – from more than pockets of Boko Haram. This morning, from every flank not less than 15 gun trucks were facing us,” he said.

In the video, the theatre commander was seen amongst troops lamenting that his team suffered a massive loss of men and equipment because it was outgunned by Boko Haram.

He also revealed how he lost several types of equipment and was almost rendered immobile due to a massive attack on troops’ vehicles.

“But what we have here, I will give you some estimates, sir. Boko Haram has fired more than a hundred mortar bombs at us; they have fired 80 to a hundred RPGs at us; in addition to eight to 10 gun trucks firing at us from all sides. We have not run, and the soldiers are not misbehaving or disobeying orders.

“We have casualties. I will come and see you in person on what we need to do. But we are not running.

“As you can see over that’s one of ours that bullets tore, we lost about 20 MRAP tires here. We have changed close to 250 Hilux tires due to the terrain.

“This is what we are facing in the Timbuktu triangle, sir. We are not running, we are fighting as a system to curtail the situation and achieve your mission, sir,” Adeniyi said.

He was subsequently removed and was directed to proceed to Abuja for trial by the Nigerian Army.