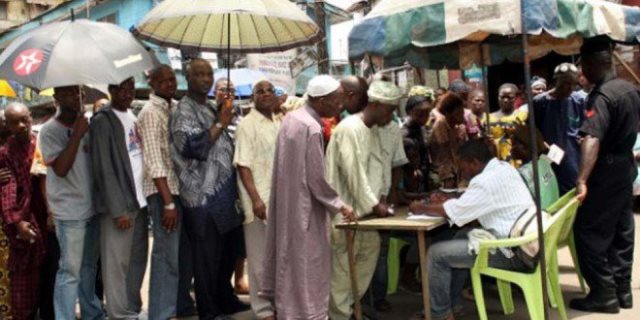 If that percentage of people votes in the elections, it would be the highest voter turnout ever recorded in the nation’s recent history.

By the Cleen Foundation study, four key findings are indicative of the viability of the polls: voters’ willingness, possibility of electoral violence, security threats and the readiness of the Independent National Electoral Commission, INEC.

Cleen Foundation, an NGO promoting democracy and good governance, found that 89 per cent of the 5,000 Nigerians randomly selected in the survey have expressed willingness to vote. This is an increase over a willingness in previous elections which was observed to have peaked at 83 per cent.

However, of those who feel intimidation and violence would be an issue, 66 per cent think it would occur at polling units and 52 per cent say it will occur at collation centres.

It is however important to note that the survey was conducted in October, 2014, four months ago. In the light of recent developments in the nation’s polity, such as postponement of election by six weeks, distribution of permanent voter card (PVC) and the uncertainty of the Nigerian military to provide security, which have generated mixed reactions, there might be changes in these responses were the survey to be re-conducted.

Nengak Daniel, program manager at Cleen agrees that “people’s reactions will be different now from what it was in October” but regretted that the organisation does not have the funds to conduct a new survey.

According to him, not all the people who expressed willingness to vote at the time had PVCs because distribution had not begun in a lot of places.

As at 10th of February, INEC said it had surpassed its bench mark by attaining 69.68 per cent PVC distribution. As at the time of this survey, 60 per cent of respondents gave a positive assessment of INEC’s issuance of PVC and continuous voters’ registration but in the light of current events INEC has been sharply criticized for poor and late distribution and people’s judgement might be different.

The electoral body, however, claims the number of those with PVCs has surpassed all its previous statistics and that it is not possible to have a near 100 per cent collection rate.

Furthermore, the survey, which was made public in Abuja last week, finds that 68 per cent of the interviewees called for an increase in security agents on electoral duty, 36 per cent feel the military is the best security agents to provide security, 20 per cent said it is the Police, 6 per cent voted the Nigerian Security and Civil Defence Corps, NSCDC, 3 per cent agree on the Department of State Security, DSS, while 28 per cent said it is a combination of all. Seven per cent of the respondents did not know..

Notably, at the time of the survey, the postponement which was announced on February 7th, due to the military’s declaration of its inability to protect the electoral process had not taken place.

The military’s stance has however been greeted with criticisms from the main opposition party, former military Head of State Olusegun Obasanjo, legal practitioners, foreign observers, NGOs as well as average Nigerians.

Thus, the 68 per cent who trust in the military to be in the best position to provide security during the polls might drop drastically if the survey were to be conducted again.

Titled Election Viability Survey 2015’, the survey was conducted in partnership with the Open Society Initiative for West Africa, OSIWA.

The method adopted was telephone polling in which target respondents were contacted over the telephone and questionnaires administered using five major languages (Yoruba, Hausa, Igbo, English and Pidgin English).

The mobile numbers of a cross section of citizens was provided by NOIPolls randomly across the 36 states of Nigeria and the FCT.

THE Nigeria Immigration Service (NIS) has directed passport offices across the country to work...

PRESIDENTIAL candidate of the All Progressives Congress (APC) Bola Tinubu has, again, told the...

THE United Nations Children Fund (UNICEF) said it is mourning the loss of 100...

THE presidential candidate of the People's Redemption Party (PRP), Kola Abiola, has been fined...
Advertisement