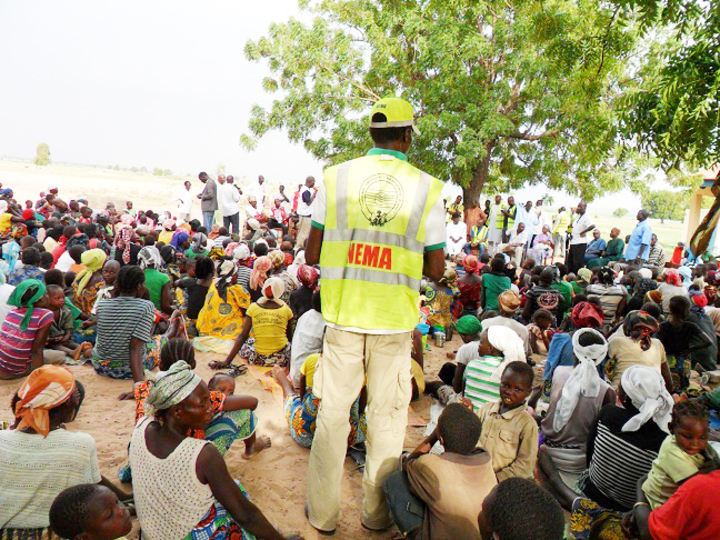 The National Emergency Management Agency, NEMA in collaboration with the Adamawa State Emergency Management, ASEMA, said it has recorded 10,496 internally displace persons, IDP, in five camps located in Yola south and Fufore, due to the terrorist attack on the town by insurgents last week.

This high number of IDPs in the camps was as a result of the fresh attacks launched by members of the dreaded Boko Haram sect on Mubi town as more people keep running into the state capital, Yola.

The director of Relief and Rehabilitation at NEMA, Eugene Ezeh, who headed a special team that visited the state, said that the agency had made available enough relief materials to all the established camps in the state, adding that the new ones would be provided with tents.

The Adamawa State governor, Bala Ngilari, who received the special team of the agency said that the state government had sent vehicles to locations around Mubi and neighbouring Cameroon, where displaced persons had fled to convey them to the camps in Yola, the state capital.

“The tragedy has really stressed us. We require your intervention for both short and long term,” the governor stated.

Ngilari urged many of the displaced persons who he said live with their relatives in host communities to come out and register so that they could be beneficiaries of the things the agency had provided.

The minister of Women Affairs and Social Development, Zainab Maina, who was also present at the occasion, said President Goodluck Jonathan directed her to look into the situation and also assure the displaced persons of the federal government’s constant support till they return homes.

She said the federal government was making all efforts necessary to find a lasting end to the Boko Haram crisis rocking the region.

Stakeholders To Meet On Security For Motor Parks

Collapsed building kills one, injures many in Abuja

Nineteen months after ICIR report, NEMA still waits for due…