A lively, innocent teenager with big dreams was returning from church with his family when a stray bullet from a police officer changed his life.

AT 13, Isaac already knows what it means to be poor. His dream is to become a lawyer so he can protect his mother, and “take his family out of poverty.”

Isaac’s law ambition was threatened when he was almost killed by the Nigeria Police Force.

The officer responsible for shooting Isaac in the belly remains unknown.

It was one stray bullet from many targeted at young Nigerians who had poured onto the streets of Ogbomoso in Oyo State, demanding an end to police brutality.

Last October, protests against police brutality began across Nigeria. In Ogbomoso on October 10, 2020, hundreds of youth marched to the palace of the paramount ruler in the town, the Soun of Ogbomoso, Jimoh Oyewumi.

“They were welcomed at the palace,” one source reveals. “They were not causing any trouble. They did not have any weapon. They were singing and carrying placards.¨

“They wanted to visit the police station to talk to the DPO, and that was how the trouble started. The police did not want them to come close, so they started shooting at them.”

20-year-old Jimoh Isiaq was killed during the police assault on peaceful protesters. The next day, the protesters, angered by the death of the innocent young man, marched unto the streets once again. They were however greeted with an even greater show of force by the police. More people were shot, and at least three people were killed.

Isaac, in the company of his mother, Mary, and his two younger brothers, was walking back from church on October 11 when they found their path – the Oke Owode road in Ogbomoso – hijacked. Loud, sporadic gunshots from police officers sent everyone scampering for safety. 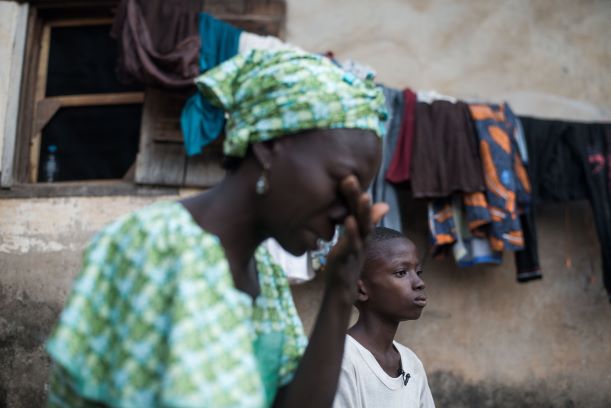 The family ran in different directions, with all but one of them coming out of the hailstorm of bullets unscathed.

A bullet struck Isaac’s back and knocked him to the ground. But Isaac got up and continued running until the numbing pain in his stomach overwhelmed him and his knees buckled. He slumped.

“I thought that was all,” his mother remembers. “I became so powerless when I saw him fall. I did not know what to do anymore. I was disoriented. People around quickly helped me carry him, put him on a (motor) bike which took him to the hospital. He was receiving blood when I got to the hospital later. Some people were donating blood for him already.”

Mary says she did not think her son would survive when she saw him slump. He seemed lifeless as people rushed him to Bowen University Teaching Hospital.

Yet when Mary got to the hospital and realised that her greatest fear had not happened, that her son was still alive, her fear did not at all dissipate. The mother knew she would be unable to help her son stay alive due to the challenge of settling expensive surgery and treatment bills. She is extremely poor, lives below one dollar a day, and barely has enough to feed herself and her five children.

“I thought I would lose him eventually,” the mother says in Yoruba. ¨I knew it would cost a lot of money to keep him alive, and I knew I would not be able to afford it. I only had the N500 I had planned to use to cook on me.”

‘It was a miracle’

Mary says her child was a healthy, active young boy before the incident. He loved football, and was fond of kicking plastic bottles around the neighbourhood like many children his age. He was obedient and loved attending church. 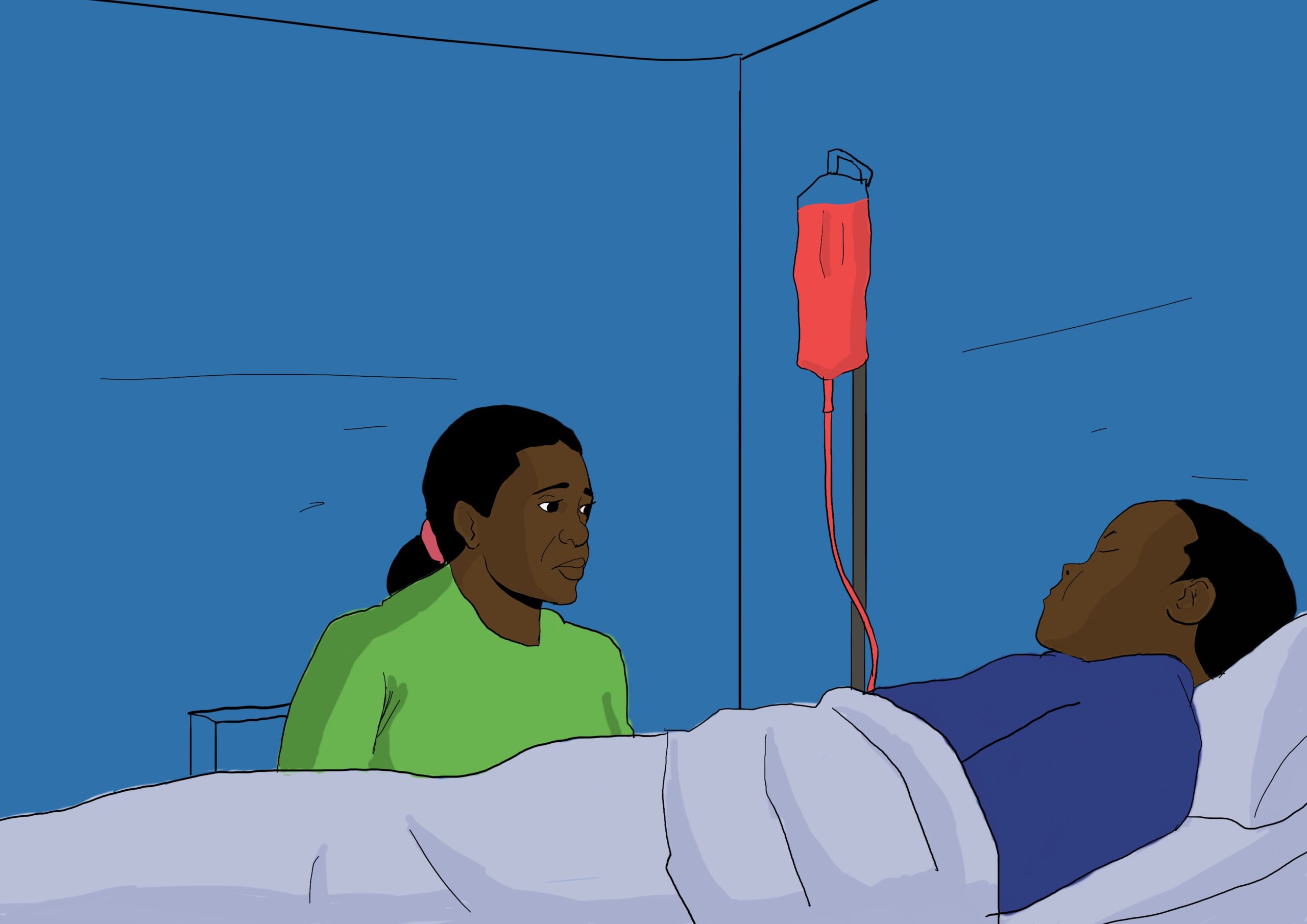 “Anytime I told him it was time for church, he would follow me without complaint,” she says.

But Isaac is now a shadow of his old exuberant self. Since getting shot, a lot has changed for the 13-year-old.

He is always tired and never leaves their home except with his mother. He has stopped playing. He now moves slowly, cautious not to aggravate the gunshot wound, which is covered with cotton wool and plaster inches above his waistline. His lips are cracked, his eyes sunken. He looks terribly emaciated.

“I just sleep on the bed now,” he says with quivering lips.

After the shooting, Isaac was unconscious for two days, and on hospital admission for four weeks while doctors and nurses fought to keep him alive. He doesn’t remember being in the surgical theatre or the Intensive Care Unit.

At least four people were shot dead during the protests in Ogbomosho. The doctor who removed the bullet lodged in Isaac’s belly told his mother it was a miracle the teenager survived. There are a number of major organs in the stomach, and had the bullet hit one of them, Isaac could have died. 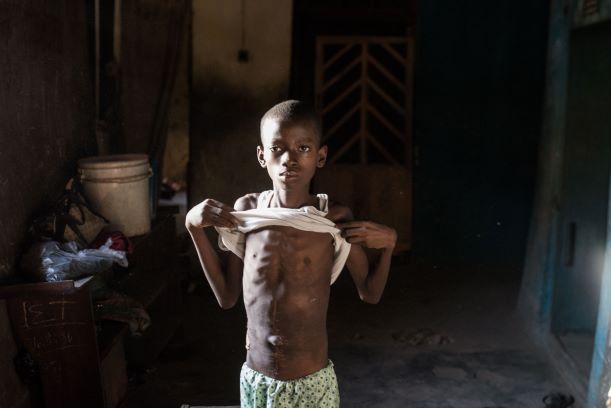 Apart from God, Mary says she owes the miracle of Isaac’s survival to Sunday Dare, Nigeria’s Minister of Youth and Sport, who paid his hospital bills.

“When the hospital gave me the bill for his operation,” she recounts, “I was scared. I did not have that kind of money, but Sunday Dare came, cleared the bill and gave us a note that exempted Isaac from any payment for further treatment at the hospital.”

Isaac begins to cry as he remembers the life-changing incident. He says he would like to go back to school, ride more bicycles and run around the community– all of the carefree, youthful things he used to do before he became one of the many victims of police brutality.

“I stay inside everytime now,” he says, sobbing. “It saddens my heart that I can’t play with my friends anymore.”

Isaac’s mother took him to the hospital when he recently complained about pains in his back and butt, but his doctor said there was nothing to be worried about.

Seyi Makinde, the Governor of Oyo State, has condoled with the families of victims, even as the police have denied continuously that its men shot at peaceful protests.

“The police did not fire a shot or kill any protester as widely circulated,” the police claim.

Mary has no doubt that it was the police who shot her son, but given the fact that they lack the money and the social status to hold the government to account, both mother and child have resolved to leave them to God.

“Only God can judge the police who shot me,” 13-year-old Isaac says, softly.