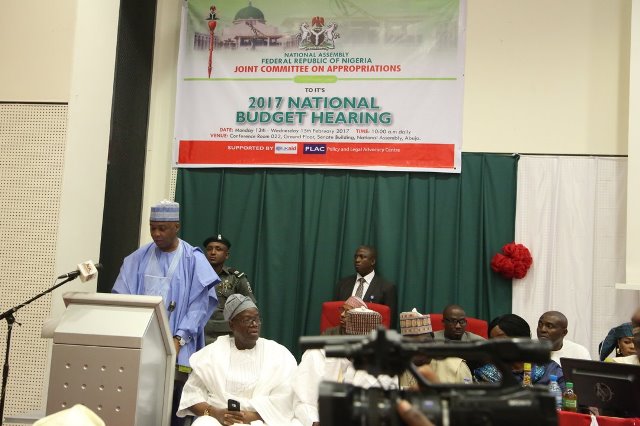 A three-day joint public hearing into the 2017 budget proposal began on Monday at the National Assembly to further scrutinize the document which was presented to the lawmakers by President Muhammadu Buhari in 2016.

The exercise, which is the first of its kind is an initiative which Senate President, Bukola Saraki, said was intended to make the country’s budgeting process more transparent and participatory.

Speaking during the exercise, Saraki expressed fulfillment at being the Senate President to pioneer such a move in accordance with the current administration’s change mantra.

“It is my belief that the public budget, if well-crafted and implemented,remains the most potent fiscal policy instrument of government in delivering socio-economic benefits in an all-inclusive manner,” he said.

“We will continue to create platforms such as these that will allow the general public to play a role in what we do here.

“Moving forward, the public can expect that we will continue this practice of having an open budget hearing where every-day Nigerians are primary contributors.

“Through this engagement, and others to come, we hope to increase the efficiency of government and its responsiveness to citizens needs as well as improve overall transparency and accountability in governance,” Saraki said.

Also speaking at the exercise, Chairman of the Senate Committee on Appropriations, Mohammed Danjuma-Goje, explained that 2017 budget public hearing aims at making the National Budgeting process an all-inclusive activity for Nigerians.

He said, “The budget hearing will also create for analysis, discourse and enlightenment on the basic recommendation and budget policies of the Nation.

“It will shape discourse on fiscal, financial and economic assumptions used as basis in arriving at total estimated expenditure.

“The forum  will be used for the collation of views and positions with a view to making general Legislative contribution.”

Recall that the Senate President who is also the Chairman of the National Assembly had on several occasions promised to make the budget of the second arm of government less opaque in order to curb corruption.

While organizing a public hearing into the Nation’s budget is laudable, Nigerians have continued to demand that the budget of the National assembly itself be made public.

A campaign is currently underway on the social media under the hashtag #OPENNASS, demanding that the lawmakers make known to Nigerian show it spends the huge amount of money allocated to the National Assembly each year.