Nigeria budgets N2,000 for the healthcare of each citizen in 2020 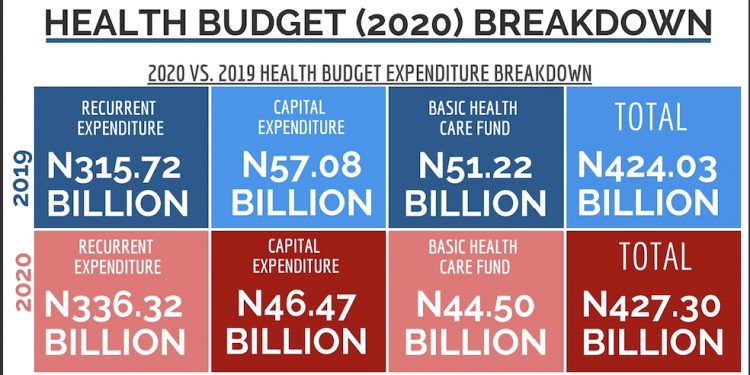 THE federal government has deemed it fit that two thousand naira (N2,000) would be enough in the year 2020 to provide for the healthcare of each of the estimated 200 million Nigerians. This is according to the meager 427.3 billion naira being budgeted for Healthcare in the proposed 2020 national budget.

You may not understand what this means, it means the salaries of all health workers in the Ministry of Health, the fuelling of the ambulances and the generating plants, the rehabilitation and or construction of new hospitals, the drugs for Malaria, Polio, Child Vaccination, Tuberculosis, Meningitis, HIV/AIDS and of course cancer diagnosis machines. The list continues to even health research, training and health promotion.

About three weeks ago, key stakeholders in the health sectors gathered at an event declared open by the representative of the Vice President to discuss the crisis of universal health coverage in the country. At the event organised by the PREMIUM TIMES, Dr Chiedo Nwankwo, a health and gender expert, stressed that Nigeria had failed to properly fund the health sector using the country’s failure to meet the 15 percent benchmark agreed upon in the Abuja Declaration of 2001.

Likewise, there was a recent warning by members of the House of Representatives about a possible Ebola outbreak in Nigeria due to the porousness of Nigeria’s borders and its proximity to the Democratic Republic of Congo, a country currently battling the deadly disease. Previous years’ allocation for the health sector has barely catered to the immediate health needs of Nigerians, talk-less the health structures and facilities to manage and handle a potential national crisis like an Ebola outbreak. 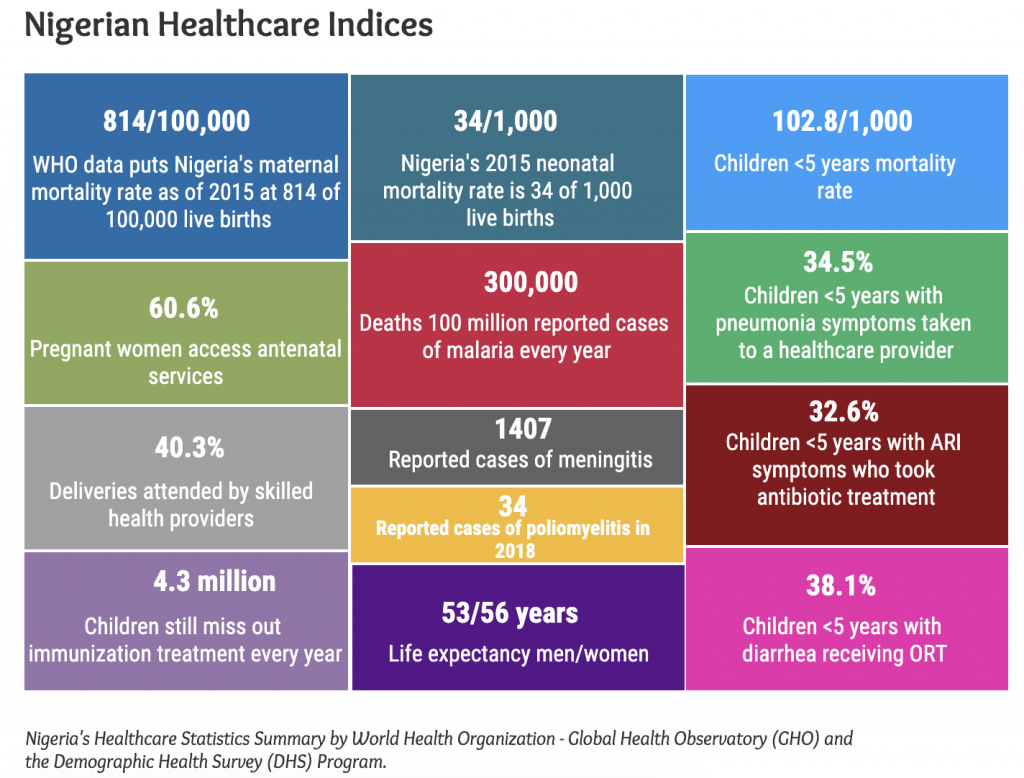 Also, only sixty-one percent (61%) of pregnant women have access to antenatal services according to the HealthCare for Women International and Relief Web while Trading Economics puts birth attended by skilled health staff by. 2014 at 35%.

The picture looks grimmer when UNICEF says that 4.3 Million Children still miss out of immunizations every year and Trading Economics puts the neonatal mortality rate at 34.7 per 1000 live births in 2015. Also, Nigeria Malaria Factsheet estimates that there are over 300,000 malaria deaths per year with 100 million cases. This is besides the fact that Maraia contributes to an 11 % mortality rate in Nigeria.

Furthermore, reported cases of Meningococcal disease by WHO as of March 2017 is a total of 1407 with 211 cases resulting in deaths, although the Nigeria Center for Disease Control puts the number of reported cases at 914.

Global Polio Eradication Initiative puts reported cases of poliomyelitis in Nigeria at 13 in 2019 and 34 in the year 2018.

A close look at the health budget proposed for 2020 and the trend analysis of government investment since 2010 by DATAPHYTE showed continued lack of commitment to prioritise health funding or adequately provide for universal health coverage of Nigerians.

Another instance which shows that the priority of this administration is shifting away from healthcare is the fact that out of the three key development sectors (Security, Education, Health) of the country, health sectors got the lowest appropriation in the 2020 national budget. The Health Ministry had a meager budget of N427.30 billion which is only 4.14% of the proposed budget for 2020, while the Ministry of Education has 653.94 billion which represents 6.32% of the total national budget, On the other hand, security  and humanitarian affairs combined has N1.985 trillion which represents 19.23 percent of the national budget. 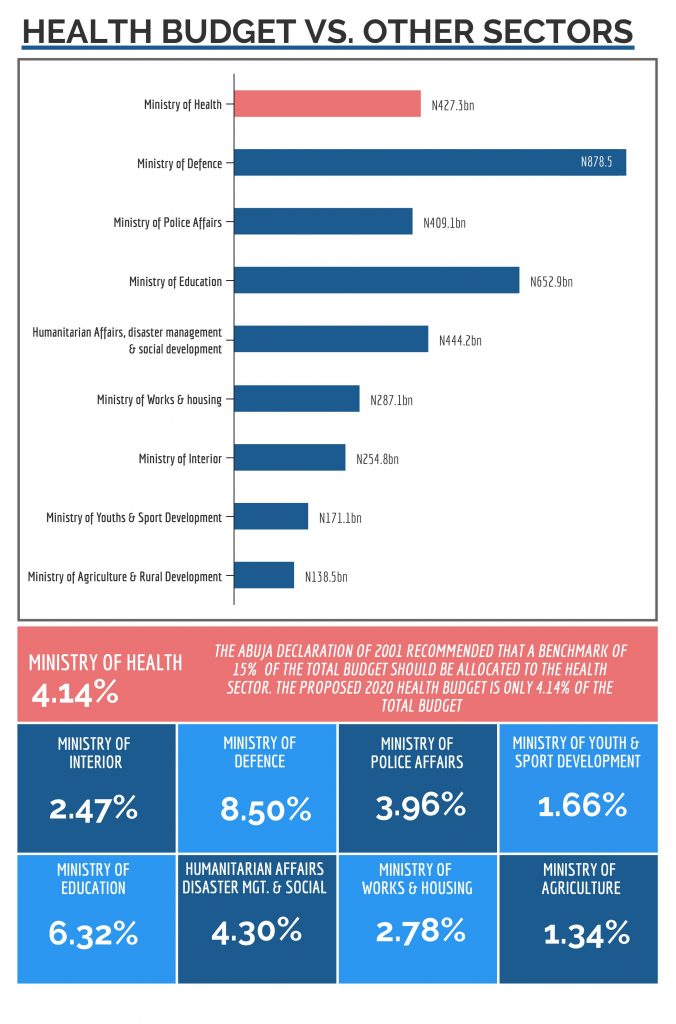 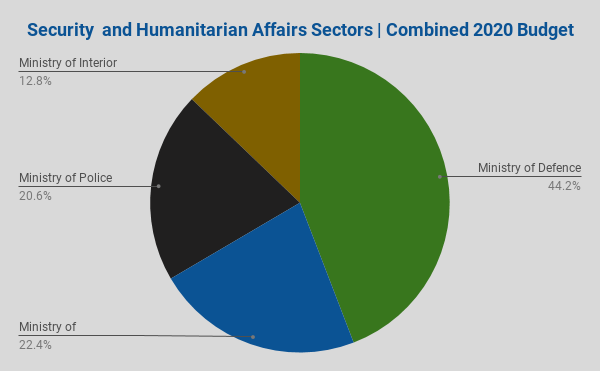 Another clear indication of the administration’s low commitment to Healthcare of its citizens is the proposed allocation for the Basic Health Care Fund (BHCF) in the 2020 budget. A check on the budget item for BHCF in the health budget indicates N44.50 billion, and this does not reflect the expected 1% stipulated in the National Health Act (2014).

Also, it is unclear how the allocation to BHCF was derived especially considering the allocation to another development fund. The Universal Basic Education (UBE) fund which by legislation should have two percent of the CRF just like the BHCF was also significantly reduced with a proposed allocation of N111.79 billion. However, if any consideration is given the revenue constraint of government to explain why N111.79 billion is proposed for UBE, then BHCF, therefore, should at least be allocated half that of the UBE – which is N55.89 billion. However, the allocation to BHCF is less than this amount by over ten billion naira.

In the same manner, though the Consolidated Revenue Fund has been on the increase, and forms the basis for allocating funds to the Basic Health Care Fund (BHCF), this has not reflected in the actual funds allocated to BHCF. The BHCF has been on a downward progression since the first allocation in 2018. For instance, in 2018, N55.15 billion was allocation but in 2019, about N51.22 billion was earmarked and the lowest in 2020 with 44.498 billion. 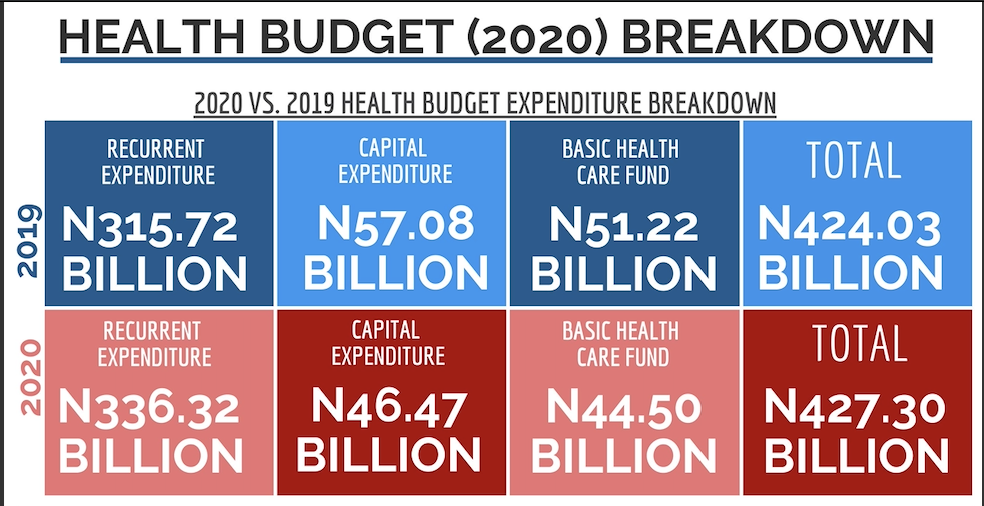 The trend analysis of budget allocation to the respective components of the Budget has revealed that though the total health budget continues to rise as well as the recurrent expenditure, the capital expenditure fluctuates and has been on a gradual decline for the last 2 years. While the capital budget increased from 28.65 billion naira in 2016 to 55.61 billion in 2017 and 86.49 billion nairas in 2018; but nosedived to 57.09 billion in 2019 and has further been reduced in the proposed budget to 46.48 billion naira against 2020.

Thus, even as the total health budget seems to be increasing annually, say from 250.06 billion naira in 2016 to the proposed 427.3 billion in 2020; it is clear the increase all goes to the recurrent budget and at a detriment to the capital allocation that sees to infrastructural investment in health. 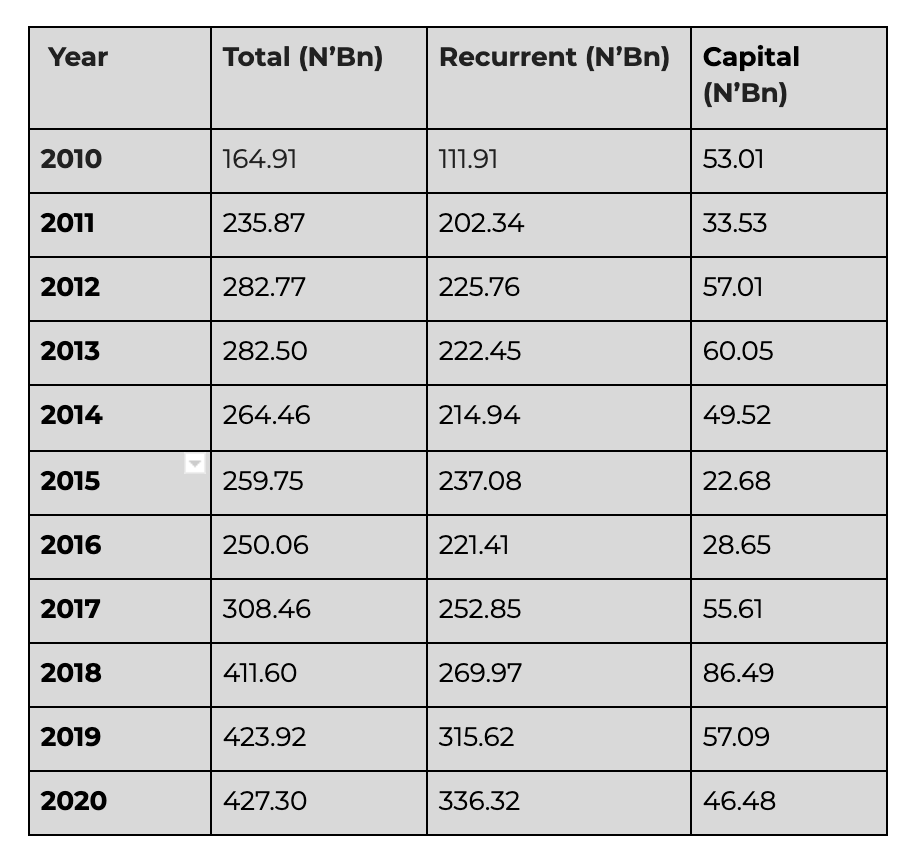 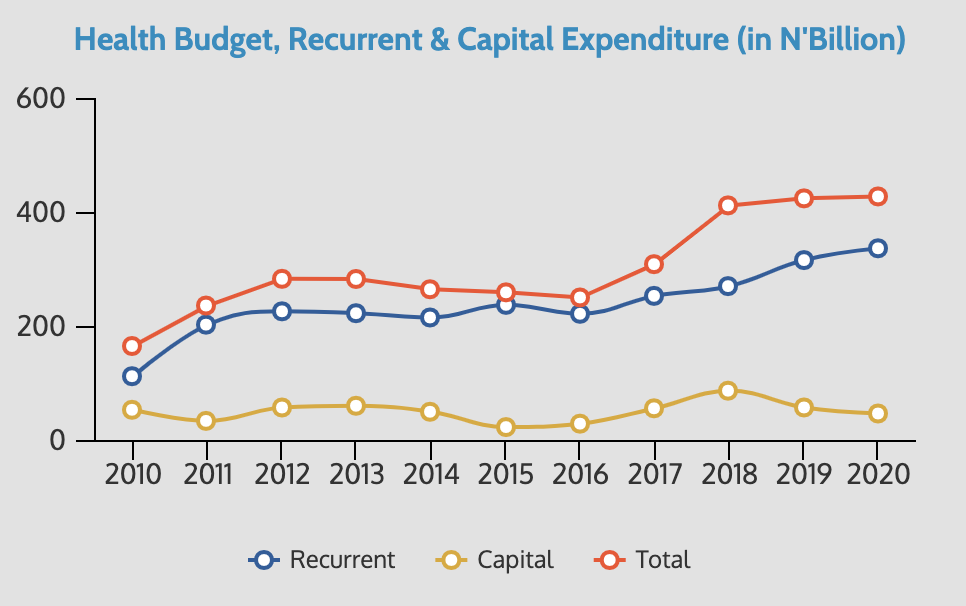 It is highly recommended that the Federal government prioritize health as a key sector and a vital component of investing in Human Capital Development with great potential to turn the fortune of the nation around. This can be realised with an upward review of the health budget by the legislative arm even as the 2020 national budget goes through the appropriation process. This is necessitated by the country’s low-performance when measured against the Abuja Declaration benchmark.

More importantly, the government must make the increases reflect in the Capital Expenditure component and follow through with the timely release of the budgeted allocation. This is necessary to achieve prompt delivery of Healthcare promises to the people, to ensure the full utilization of released funds and to avoid an eventual return of funds to the Treasury.

It is necessary to work with the National Office of the Sustainable Development Goals (SDGs), as a major component of the Global Goal is “Good Health & Wellbeing”. Therefore, there must be synergy between the SDGs Office and the Federal Ministry of Health. Closely related is the need for the government to demonstrate its commitment to The Economic Recovery & Growth Plan (ERGP) by allocating funds to achieve the health component of the Plan.

In conclusion, the government must not relent in its plan to revamp and or construct the 10,000 Primary Healthcare Centres across the Nation, by this being reflected in the budget to the National Primary Health Care Development Agency.

This report was first published by Dataphyte and supported by the development Research and Projects Center (dRPC) under the Partnership for Advocacy in Child and Family Health At scale.

A clear winner is unlikely to emerge in the Nigerian presidential election of February...

THE Independent Corrupt Practices and Other Related Offences Commission (ICPC) has discovered the sum...

PRESIDENT Muhammadu Buhari has summoned an emergency meeting of the Council of State over...

Cry Freedom | Kenya – The Hidden Cost of Free and Fair

By Ngina Kirori This is part of a transnational investigation spanning five countries – Nigeria,...
Advertisement