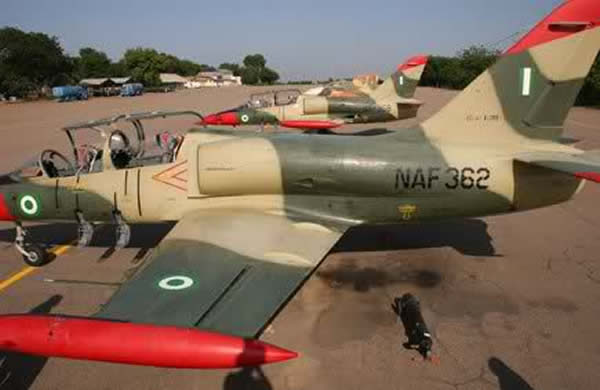 The Chief of Air Staff, Air Marshall, Ademola Amosu, has said efforts were being intensified by the Nigerian Military to search for the Nigerian Air Force Alpha Jet NAF 466 which went missing after it embarked on a routine operational mission on Friday in Adamawa State.

The aircraft, with two pilots on board, left its base in Yola, the Adamawa State capital, on Friday and was expected back by midday the same day but its whereabouts has not been determined since.

Air Mashall Amosu made the statement while fielding questions from State House correspondents, at the Presidential Villa on Monday.

Amosu noted as at the time he was speaking, that the Jet had not been sighted contrary to media reports that some villagers found it.

The Chief of Air Staff, who commended members of the public for showing concerns for the missing jet, said the information from the people though helpful had not led to its discovery.

“One of our Alpha Jets went on routine operation in the North-east and they lost contact with the control towers and that made us to immediately initiate search. The weather has not been helpful as we have deployed all our surveillance capability, the citizens have been very, very helpful and we have gotten good information from them, Amosu said.

“But the information we are getting from the citizens are good but not sufficient enough for us to define the area of search,” he added.

Nigeria’s military, backed by war planes, has been fighting to push back recent advances by Boko Haram into the north of Adamawa State and also towards Maiduguri, the state capital of neighbouring Borno state.

How using the military in Nigeria is causing, not solving problems

Seven years of waiting, pain: How enforced disappearances by the Nigerian military…

Military, paramilitary personnel to enforce lock down in…