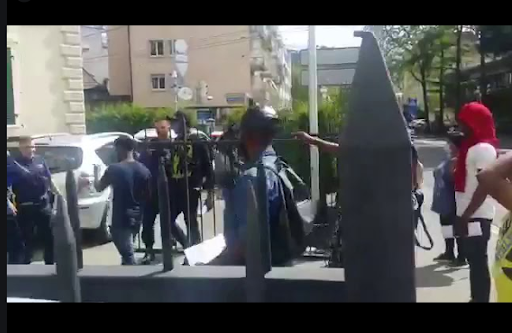 NIGERIA in Diaspora Commission, (NIDCOM) says the country’s embassy in Switzerland did not invite the Police authority to arrest Nigerians seeking passports as a video had suggested.

Abdur-Rahman Balogun, the Head of the Commission’s Media and Public Relations Unit in Abuja disclosed this in a statement issued on Wednesday.

Balogun explained that the Nigerian Embassy in Switzerland was only adhering to the COVD-19 protocol as stipulated by the Swiss Government on the day of the incident.

Explaining the incident, he said “in line with COVID-19 protocols, the Embassy in Bern, Switzerland is only allowed to attend to 10 applicants, however, the Mission worked out a program that made it possible to attend to a maximum of 20 daily, spacing out the appointments.”

In view of the above video it is imperative to state the facts.

In line with Covid-19 protocols, the Embassy in Bern. Switzerland,#Thread pic.twitter.com/n951LDXwWh

“But on this day, 64 Nigerians besieged the Nigerian Mission in Bern. It turned out that only 10 of them were on the scheduled appointment. So 54 of them had no appointment for that day.”

He further stated that apart from adhering to the COVID-19 protocols, 54 of the Nigerians at the Embassy had failed to make the necessary payment before coming to the Embassy.

“That apart, they had not made the mandatory online payment and a majority of the applicants came from Italy and Spain without any appointment whatsoever,” Balogun said.

He added that while  Baba Madugu, the Nigerian Ambassador to Switzerland, was addressing the affected applicants to respect the COVID-19  rules in place and also follow due process, they barged in through the front door and overcrowded a hall that was meant to receive only 10 people at a time.

“The mission did not call the police as erroneously stated in the video, but invited the Embassy Protection Unit to bring calm and decorum back to the hall,” he maintained.

He noted that the COVID-19 pandemic which has necessitated the introduction of strict protocols in these unusual times is difficult for everyone and every country.

Balogun said the authorities invited the Embassy Protection Unit to bring calm and decorum back to the hall.

“The men of the Embassy protection unit addressed them, and those on appointment as well as those who had made their online payments were attended to while others were advised to follow the due process, with an assurance that everyone will be attended to as long as the rules were followed.”

The Commission appealed to Nigerians abroad to be good ambassadors of the country wherever they are and obey laws put in place reiterating that the Nigerian Mission in Bern is still attending to Nigerians who follow the process, pay online and book their appointments as stipulated.

It said that  Nigerian Mission in Bern is still attending to Nigerians who follow the process, pay online and book their appointments as stipulated.

A video has gone viral of some Nigerians in Switzerland at the country’s Embassy claiming that the authorities ordered police to arrest them when they came for passport applications.

We have replaced burnt card readers in Ondo ― INEC chairman

30 Nigerians stranded in Lebanon rescued, to be evacuated with 150 others