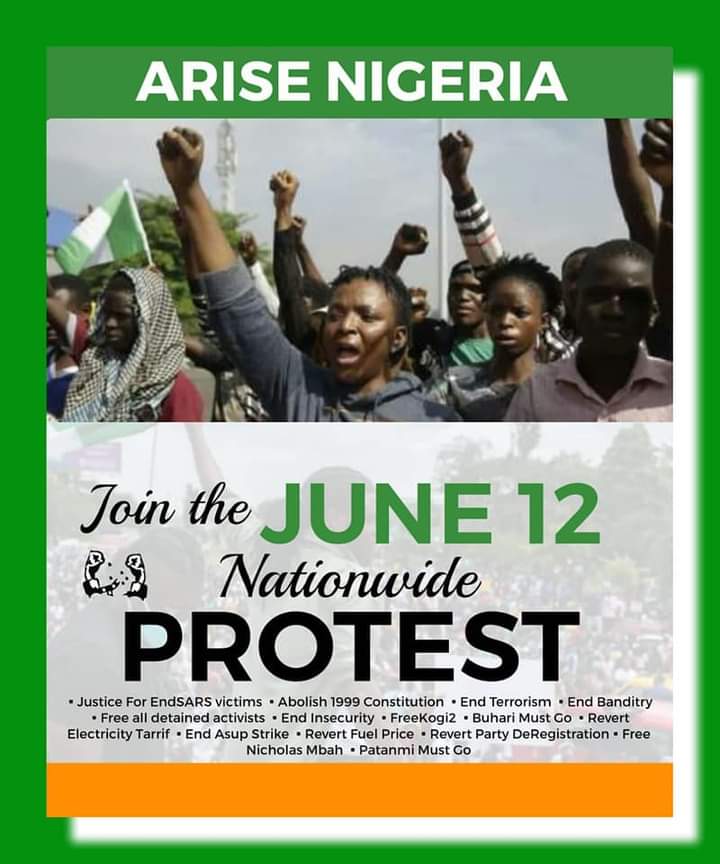 NIGERIANS are set to stage a nationwide protest on Democracy Day June 12 against ‘bad governance’ under President Muhammadu Buhari.

Majority of the citizens who took to various social media platforms, including Twitter to express their displeasure about the leadership of President Buhari, have hinted that the protest would be held to demonstrate against ‘dictatorship’ of the president.

A Twitter user, Dr Rita Onyejesi @agbomma71 called on other Nigerians to join the protest, saying  the citizens lack basic amenities, yet their rights to freedom of expression were being taken away.

“Enough is Enough, woke up today & noticed that my Twitter can’t load without a VPN.We have no good Road, no job,no light everything is “No” &they want to take our freedom of expression and interaction too. They have bitten more than they can chew #June12Protest,” Onyejesi said.

A human rights activist Deji Adeyanju @adeyanjudeji also said the youths would be protesting on June 12 against insecurity, nepotism, economic woes, among others.

Another Twitter user who identifies Towolawi Jamiu Endsarsnow @jharmo said the protest was necessary adding that if Nigerians did not resist the Twitter ban, someday, the president could suspend the constitution and introduce a martial law.

“When a regime has failed totally, it will result to the use of excessive force.The @MBuhari regime is testing the ground with the #TwitterBan and if not resisted, it will move to suspend the Nigeria constitution and introduce a martial law. #June12Protest is a date with history,” Jamiu posted on Twitter.

Other prominent Nigerians have also taken to social media to call on social media users to join the nationwide protest.

The publisher of Sahara Reporters Omoyele Sowore in a tweet made earlier today, enjoined Nigerians to utilise the planned protest as a means towards changing Nigerian history.

“Join the Mother of All Protests June 12 2021! Don’t miss the greatest opportunity to change the course of history in Nigeria! #June12protest #Buharimustgo #Twitterban #Revolutionnow,” he said.

Former Minister of Education Oby Ezekwesili cited the Twitter ban as a good reason for Nigerians to join the June 12 protest against the government.

“Connecting-the-dots after I read something. It does indeed sound plausible that the #TwitterBanNigeria was meant to be an early preemptive strike against the #June12Protest. Ok then. Good reason now for more citizens to join that protest.A strong answer to ‘What’s Next,” Ezekwesili posted.

A group of lawyers under the name, Lawyers for Rule of Law has also said it would offer pro bono services to persons arrested by security officials during the course of the planned protest.

“Lawyers willing to join should reach out,” human right lawyer and activist, Inibehe Effiong, tweeted at 7:05pm on Saturday.

In more calls for the support of the protest, a user on Facebook  Wuese Terkuma Mr. infallible said Nigerians need to act fast and ensure immense action for the June 12 protest.

Another Facebook user who identifies as Opeyemi Ayoola said all Nigerian embassies would be shut down on June 12.