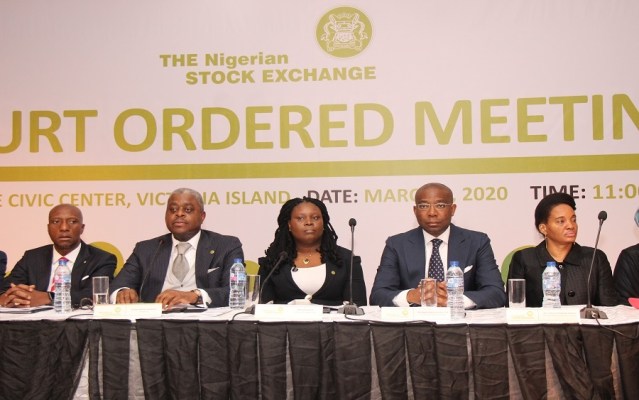 FOLLOWING a court-order, the Nigerian Stock Exchange (NSE) is going to be publicly listed with an authorized share capital of N1.25 billion consisting of 2.5 billion ordinary shares at 50k per share.

At an extraordinary general meeting, members have unanimously voted for the NSE to change its name to Nigeria Exchange Group Plc (NEXG), making it a publicly quoted company.

This makes it a holding company thereby separating its regulatory functions from its other business activities.

Recall that the NSE received a no-objection approval to its demutualization on January 15, 2020.

With NEXG having satisfied all requirements of being a public quoted company, according to the scheme, document for the demutualization would have 1.96 billion number of shares allotted.

Conclusions in the meeting held showed that all assets, liabilities, and undertakings, including real property in relation to the trading business of the Exchange, are to be retained by NEXG.

The securities exchange license of NSE, along with all assets and existing contracts required to carry out securities and exchange functions would be transferred to NEXG.

Oscar Onyema OON, the CEO of the new NEXG, disclosed that the group would move from having a council to having a board of directors with about 5 to 6 independent directors coming on board.

“With the separation of the regulatory activities from the business activities, we would begin to see a different type of organization, an organization that is really driven for profit, hitting on all cylinders,” Oscar said.

“While the regulatory company will provide all the regulation that needs to happen to ensure that we are running according to global best practices which should be attractive to large corporates that are looking for a well ran exchange to list their companies,” Oscar added.

Otunba Abimbola Ogunbanjo chairman of the board of NEXG said: “When you operate as a profit entity the first thing that you are going to see is enhanced performance, competition, deepening of the market, foreign investors looking at the Nigerian Stock Exchange to invest, flexibility in the products and much more.

“We will be operating as a public entity now a for-profit entity so the first transformation that is going to happen will be the decoupling of the membership rights and ownership rights”.

“Prior to this demutualization, you had only the dealing members and the ordinary members, now that is going to be different.”

He said the report and result of the court-ordered meeting are to be filed with the Securities and Exchange Commission (SEC) in order to obtain the final copy of the scheme. Then the necessary petition will be made to the Federal High Court to sanction the scheme.

Once sanctioned by the court and registration is done with the Corporate Affairs Commission, demutualization is effective.