The demand was contained in a communique issued on December 15 after a two-day meeting in Abuja, where the group also asked Buhari to be more accessible to the views and opinions of Nigerians and show more empathy to the plight of citizens.

Membership of the Committee for Goodness of Nigeria (CGN) include all former chief justices of Nigeria, former defense chiefs, former national security advisers, former secretaries to the  government of the federation and the leadership of the National Council of Women Societies and the National Youth Council of Nigeria, as well as some Nigerians that headed international organisations.

Other members include: the Nigeria Labour Congress, Trade Union Congress, leadership of academic unions of universities and polytechnics, and leadership of the Christian Association of Nigeria and the Supreme Council for Islamic Affairs.

Secretary of the CGN Ahmed Magaji, who read the communique after a meeting at the Transcorp Hilton in Abuja, explained that Obasanjo, Abdulsalami, the Sultan and Onaiyekan decided to convene the meeting ‘out of great concerns for the general situation in the country.’

The group met for the first time on June 10 to deliberate on ways to promote unity, security, peace, development, equity, fairness, justice, inclusiveness, wholesomeness, sense of belonging, growth and progress in the country.

A technical committee was set up at the June 10 meeting. The report of the committee was considered and adopted at the second meeting which held on December 14 and 15.

Magaji disclosed that it was agreed at the second meeting that “the process of fixing Nigeria is an urgent task that must begin now and engage the attention of all leaders and all Nigerians to prevent the situation from consuming all of us.”

The group, at the December 14 and 15 meeting, also identified areas of constitutional amendments that must be carried out before the next elections in 2023, according to Magaji.

Magaji said that the amendments identified by the group would strengthen national unity, peace, stability, security and development.

The communique stated that a report of the technical committee which included the constitutional amendments proposed by the group would be forwarded to the president, the National Assembly, state governors and state houses of assembly.

The communique noted that the group’s recommendations for constitutional amendment were rooted in well-informed and innovative recommendations of previous conferences and other fora.

The group stressed the need for reform of the constitution, and “current issues that have assumed strong presence in the life of the nation and have the potential to be addressed through constitutional amendments.”

The meeting, according to the communique, noted the need to accord urgency to constitutional reform, as well as the need to mobilise strong will, vision and action in the process, “so that the reforms will address both contemporary national challenges and the future of a stable and prosperous Nigeria.” 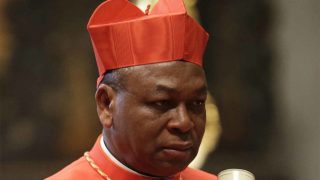 Stressing that “To fix Nigeria, a beginning must be made,” the communique disclosed that the meeting took note of the state of the nation, particularly the areas of stress among the elite and insecurity across the country.

Stating the recommendations adopted at the meeting, the communique said the group supported the proposals included in the Electoral Act Amendment Bill which the National Assembly had forwarded to Buhari for assent.

“We support all efforts to improve the quality of the electoral process, and other processes for the emergence of quality leadership in Nigeria,” the communique observed.

Demanding accelerated action on constitutional amendments, the group, in the communique, warned that there were serious threats to the 2023 elections “in the current state of the nation.”

Distances and tensions between parts of the country, very low levels of confidence of citizens that the future of the country was secure and that their welfare would improve and failing capacities of vital institutions of state were identified as some of the factors threatening the 2023 elections.

Calling on elders and elites to play an active role in de-escalating tensions and building bridges between and among communities, the communique also urged Buhari to adjust his style of leadership.

“President Muhammadu Buhari should strive to be more accessible to views and opinions of Nigerians, and raise the administration’s levels of empathy and appreciation of circumstances under which citizens live.”

The group further urged the Nigerian government to examine all options towards resolving security challenges in the country, including the ‘stick and carrot’ approach.

The communique also disclosed that it was agreed that the Committee for Goodness of Nigeria should be sustained as a credible and productive platform which would afford elders and groups the opportunity to join forces to address national issues and challenges.

Fielding questions from journalists after the presentation of the communique, a member of the CGN Audu Ogbeh said the constitutional amendments recommended by the group included: adoption of the direct primary model, upwards review of the derivation fund for mineral producing communities, restructuring, state Police and re-introduction of native authorities in the governance system.

Ogbeh added that members of the group were worried at the level of insecurity in the country.

“We are worried that Nigeria is degenerating into a land of lawlessness; we are all in danger and this should not be,” he said.

Another member of the group Kanu Agabi, a former Attorney General and minister of justice, said members of the Committee for Goodness of Nigeria decided to come together to solve the country’s problems.

At a press conference earlier on December 15, Nigerian Information and Culture Minister Lai Mohammed had downplayed the insecurity problem in the country, saying that other nations also had security challenges.

Reacting to the development following a question asked by a journalist, Spokesman of the Northern Elders Forum Hakeem Baba-Ahmed, who is equally a member of the Committee for Goodness of Nigeria, said the group would not join issues with the Federal Government.

But he added, “It is very little consolation for Nigerians to say there is insecurity in the United States and other countries. The evidence of insecurity in Nigeria is out there in the streets. We will not join issues or respond to statements made by the minister of information, our recommendations speak for themselves. Our role is not to join issues with the government. The government should do more.”