THE people of Edo State in the south-south region of Nigeria have re-elected Godwin Obaseki as governor for another four-year term.

The incumbent governor and flag bearer of the People’s Democratic Party led with 307,955 votes against Ize-Iyamu of All Progressives Congress who polled 223,619, according to the final results announced on Sunday in Benin City, capital of Edo State by the Independent National Electoral Commission, INEC. 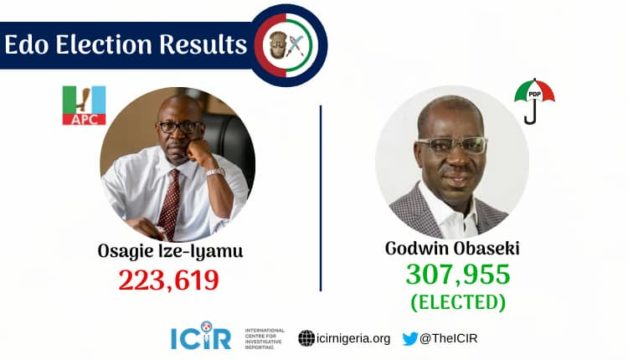 Four years after, Obaseki repeated his victory, with a wider margin despite joining PDP a few days to the party’s primary.

Governor Obaseki won in 13 local government areas in two senatorial districts including his local government, Oredo where he polled 43,498 votes against his closest rival, Ize-Iyamu who scored 18, 365 votes.

Several pre-election polls conducted had predicted a win for Obaseki.

The ICIR tracked six polls conducted online via websites and microblogs, all of which show that Obaseki is more popular than other contestants in the recently concluded election. 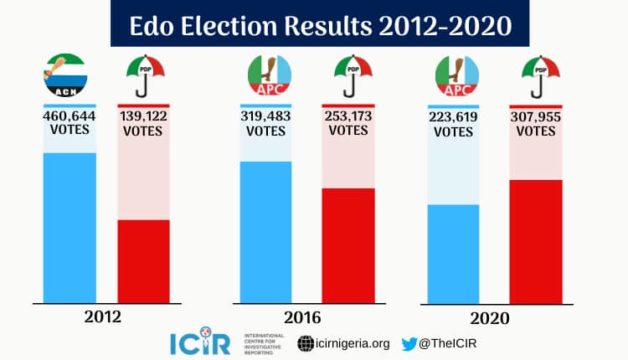 With this victory, Obaseki became the fifth governor who had won twice as a candidate of two opposing political parties since the return of civil rule in 1999.

The first is the former governor of Kwara State, Abdulfatah Ahmed who won as PDP governor in 2011 and later as APC in 2015.

There was also Peter Obi of Anambra state who also became governor as the flagbearer of APGA and later of PDP.

In 2019, Governor Aminu Tambuwal of Sokoto State defected from APC to PDP and won his re-election.

Obaseki’s victory inadvertently has returned Edo to the political leadership of PDP after a 12-year hiatus, starting with the victory of APC/ACN Comrade Adam Oshiomhole in 2008.

Professor Oserheimen Osunbor of PDP lost to ACN  in 2008 after the court declared Oshiomhole the true winner of the gubernatorial elections, with 166,577 votes.

The tribunal invalidated 263,144 for the PDP and 30,610 for AC in two local government areas where massive rigging was recorded, therefore making way for the victory of Comrade Oshiomhole.