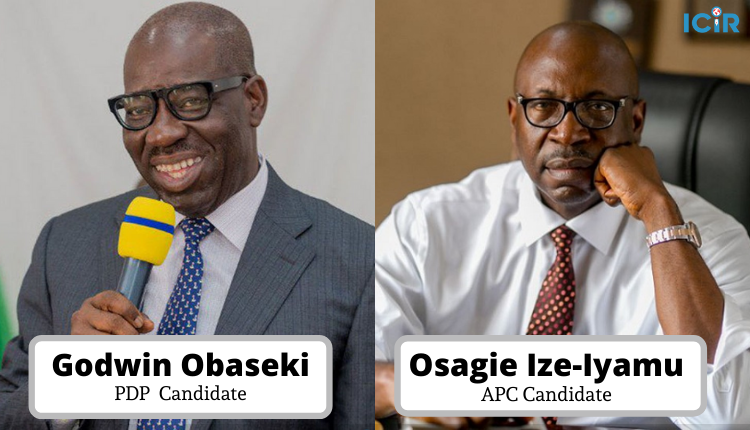 WITH less than 48 hours to the 2020 Edo governorship election, PDP flag bearer and the incumbent governor of the state, Godwin Obaseki, is polling ahead of his opponent, Osagie Ize-Iyamu, in several online surveys tracked by The ICIR.

The Centre tracked six polls conducted online via websites and microblogs, all of which show that Obaseki is more popular than other contestants in the Saturday, September 19 election.

In a poll conducted by Situation room, a civil society group, Godwin Obaseki obtained 57.73 percent of the total vote, followed by Ize-Iyamu who scored 40.07 percent and others, 0.94 percent.

Similarly, Allnews Nigeria, a digital media platform, had in August set up an online opinion poll targeted at Edo voters that lasted for two weeks, and the majority of the voters tipped Obaseki as the winner.

Obaseki polled 67.9 percent of the total votes, while Ize-Iyamu scored 28.4 percent, and others got 3.7 percent.

A survey by Opera News, a Chinese-owned news outlet, featured 1,130 voters, out of which 803 voted Obaseki, 313 for Ize-Iyamu and only 14 voted for others.

But in the poll organised by Ripples Nigeria, another online news platform, the two candidates of PDP and APC are in a close tie, notwithstanding, Obaseki was still able to snatch 17 votes more than his rival.

Immediately after the debate organized by Channels Television on Sunday, September 13 for the candidates in the Edo election, Legit.ng organized a poll on Twitter where 858 voters participated. Obaseki gleaned 57.8  percent of the total votes, Ize-Iyamu, 24.8 percent, and other 2.3 percent, while 15 percent are indifferent. 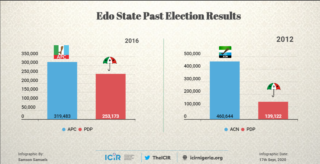 The ICIR set up an independent poll on Wednesday to test the voting pattern. In less than 24 hours, 125 votes have been cast, out of which Obaseki polled 73.6 percent, Ize-Iyamu, 20 percent, and others, 6.4 percent.

In addition, a  social media influencer on Twitter, Segun Awosanya aka Sega L’eveilleur conducted also an independent survey and attracted 3,660 votes where Obaseki got 87 percent and Ize-Iyamu, 13 percent.

Meanwhile, while a poll result is an indication of what the election outcomes could be, it is not always inch-perfect. Often time, polls are bedeviled by the methodological challenge of unrepresentative samples.

In 2019, for example, most polls tipped the former Vice President Abubakar Atiku as the winner of the general elections against the incumbent President Muhammadu Buhari, but the final result upturned the verdict of the pollsters. President Buhari eventually scored 15,191,847 while Atiku trailed behind with 11,262,978. Observers then noted that the basic problem could be that the polls contained many more voters sympathetic to PDP than to APC.

But there is also the existential problem of electoral fraud which president Buhari described as his “main concerns.”

In In 2018 election, Kolapo Olusola (Eleka) of PDP defeated Kayode Fayemi of APC by 25 percent in the pre-election poll in Ekiti state while Jeremiah Oseni defeated Simon Lalong by 2 percent in a keenly contested 2019 election in Plateau state. None of the two winners of the polls eventually became the governors.

Notwithstanding, it is also recorded that the elections were marred by rigging and other fraudulent parctices.

MIGRATION MENACE: Europe should help develop Africa because they helped in…