‘He is only human’: Aide explains why Edo governor slept during Buhari’s speech at UNGA

CRUSOE Osagie, the special adviser to the Governor of Edo State, Godwin Obaseki, on media and communication strategy, has described the pictures of Obaseki sleeping at the United Nationa General Assembly (UNGA) as the handiwork of “idle hands and mischievous minds”.

Obaseki was pictured yawning tiredly and dozing off while President Buhari was delivering his speech at the event, but Osagie said his principal was just being human. He noted that the governor, having had a lot of work to do in Edo State, and also enduring a long flight to New York, could not help but give in to the force of nature.

“Our attention has been drawn to a mischievous campaign designed to smear the image of the Edo State Governor, Mr. Governor Obaseki,” Osagie stated. 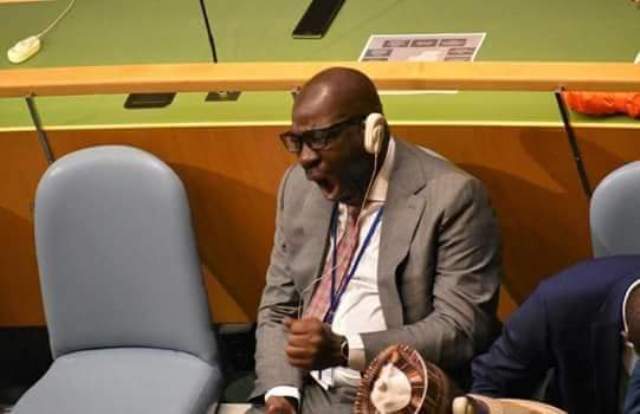 “The disparagers have populated the internet with photographs of the governor when he momentarily succumbed to fatigue after a long flight, preceded by a chaotic itinerary in Edo State before heading to New York for the 73rd session of the United Nations General Assembly, in the United States of America.

“The idle hands and mischievous minds behind the smear campaign against governor Obaseki are clearly not people to be taken seriously.”

Osagie criticised the people sharing pictures of the sleeping governor, wondering why they would not share pictures of the governor when he was carrying out his duties. He also pointed out that pictures of renowned world leaders dozing off during major world events abound on the social media.

Obaseki is one the politicians that accompany President Buhari to the 2018 UNGA, taking place in New York, United States of America. Also accompanying the president on the trip are his wife, Aisha, and several ministers.

VIDEO: Primary School in Benin where pupils take classes under the rain