#OccupyLekkiTollGate: Why Nigerians want to stage another protest 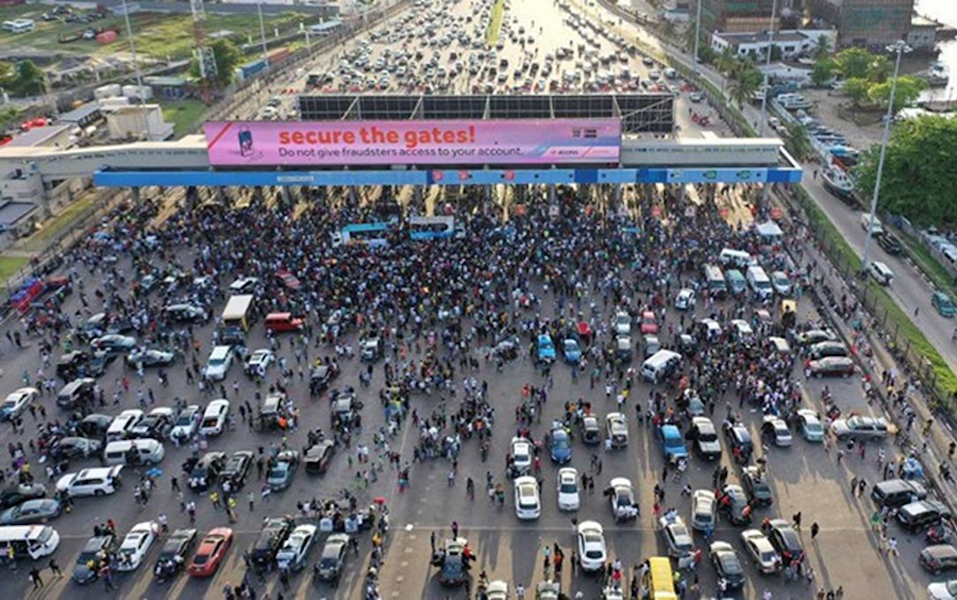 SOME Nigerians  are planning to protest the reopening of Lekki toll gate in Lagos following the decision of the  state’s judicial panel on police brutality to hand over the property to Lekki Concession Company (LCC),  which manages it.

The mass protest currently trending on Twitter with the hashtag #OccupyLekkiTollGate has been planned to hold on Saturday to stop the toll gate from being re-opened.

Trending with over 30,000 tweets, the Nigerians are insisting that the toll gate remains closed till justice is given to victims of the October 20, 2020 shooting by officers of the Nigerian Army.

One Twitter user, identified as Obikoya Adebowale, said he and others would not allow the government to reopen the toll gate until justice was served.

“We will not allow these (sic) government to brainwash us, we need justice for those heroes that sacrificed there (sic) lives at the Lekki massacre. Enough of these oppression and tyranny,” Adebowale tweeted.

Another user, identified simply as Kaylechi, while taking the same stance as most users on the hashtag, said reopening the toll gate meant the government was insinuating that issues surrounding the Lekki shootings had passed.

“Re-opening of Lekki Toll Gate is the govt saying “forget it, that one has passed.” But what they don’t know is that youths are determined to get justice. Lekki Toll Gate must remain closed until investigations are concluded and justice is served,” Kaylechi wrote on Monday.

As observed by The ICIR, most users on the hashtag were aggrieved Nigerians seeking justice over the shooting at peaceful protesters at the Lekki toll gate on October 20.

The ICIR had reported that the judicial panel chaired by Doris Okuwobi approved the hand-over of Lekki toll gate to the LCC.

The Lekki toll gate has been shut by the panel since last October for forensic examinations in connection with shooting of protesters.

Defending her stance on the hand-over of the property to LCC, Okuwobi said the forensic examinations had been concluded and there was no need to stop the company from assessing it.

“The report is ready as the panel has been satisfied and the assurances from the forensic team that it will no longer require any visit to the plaza,” Okuwobi said.

The panel has decided that it would not await the termination of the petitioners before it hands over control of Lekki to LCC,” she further said.

In contrast to her view, some panel members and youth representatives insisted that the toll gate be closed until justice was served.

Ebun Adegboruwa, a lawyer and senior advocate of Nigeria (SAN), who is also a member of the panel, said the decision to hand over the property was hasty, premature and would overreach the panel’s report.

“It will overreach whatever decisions the panel may reach and foist a situation of complete helplessness and a fait accompli, on members of the panel, in respect of any recommendation that it may make, on the general operations of the plazas,” Adegboruwa said.

Unhappy with the decision of the panel, Nigerians, again, are planning to express their grievances through a protest at the same venue where peaceful protesters were shot at, and some allegedly killed last October.

As of the time of filing this report, the Lagos State’s  judicial panel had not concluded its sittings or made recommendations to the government on the victims of police brutality and the October 20 shooting but had concluded plans to hand over the property as requested by the legal counsel to LCC, Rotimi Seriki.

When contacted by The ICIR, Gbenga Omotoso, Lagos State commissioner for information, said the government had not been informed of the planned protest.

“We have not been informed of the protest,” Omotoso told The ICIR during a telephone conversation

Chat us on WhatsApp
Advertisement
Previous articleCritics dispute Buratai’s self-proclaimed achievements
Next articleEducation in Nigeria, the poverty of pedagogy and its discontent