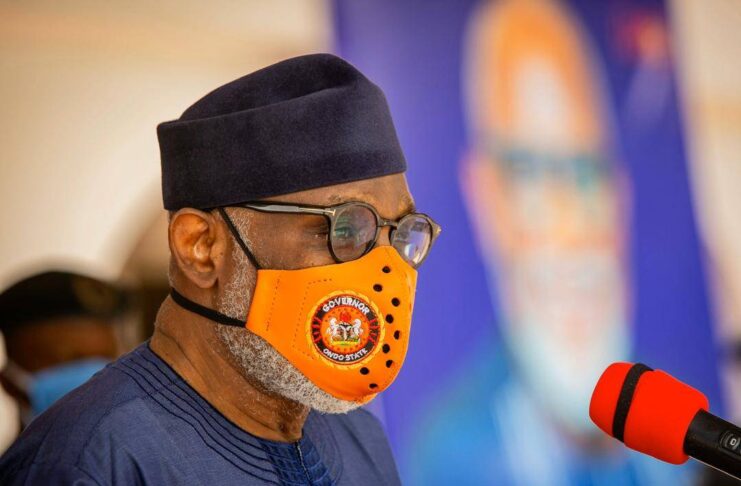 ONDO State governor Rotimi Akeredolu has directed all public buildings, facilities, and official residences in the state to fly the Nigerian flag at half-mast for seven days to honour victims of the Owo terror attack.

In a statement signed by his Chief Press Secretary, Richard Olatunde, Akeredolu again condemned the attack on worshippers at St Francis Catholic Church, Owa-luwa Street, Owo, by gunmen on Sunday.

He also restated his government’s resolve to make the killers pay for the massacre.

“Those who unleashed this unprovoked terror attack on our people have tested our collective resolves. We will not be deterred from responding appropriately to this dastardly act.

“In honour of the victims of this unfortunate attack, I hereby direct that all flags be flown at half-mast for seven days, starting from today, Monday, June 6, to Sunday, June 12, 2022. It is a collective loss to the people of our dear state,” Akeredolu said.

The gunmen threw Owo, Akeredolu’s hometown, into mourning as the news of the attack spread on Sunday.

The governor, who was in Abuja ahead of the presidential primary of the All Progressives Congress (APC), hurriedly returned home to visit the attack scene, the injured, and condone with the bereaved, as well as receive briefs from security chiefs in the state.

Nigerians, including President Muhammadu Buhari, have condemned the attack.

Meanwhile, the former governor of Ondo State, Olusegun Mimiko, has urged the state government to mobilise health resources and movable health facilities to Owo to provide prompt and adequate treatment to persons injured in the attack.

He also advised the state government to seek help from neighbouring states to give the injured good medical attention.

In a statement, Mimiko commiserated with the people of the state, especially residents of Owo town, the Olowo of Owo, and the victims’ families.

He also called on the people of the state to be alert to nip any illegality and repeat attacks in the bud.

PRESIDENT Muhammadu Buhari has submitted the names of Aishah Ahmed and Edward Adamu to...

THE president, African Development Bank Group (AfDB), Akinwumi Adesina, has made a case for...

THE United States Commission on International Religious Freedom (USCIRF) has expressed outrage at the...
Advertisement