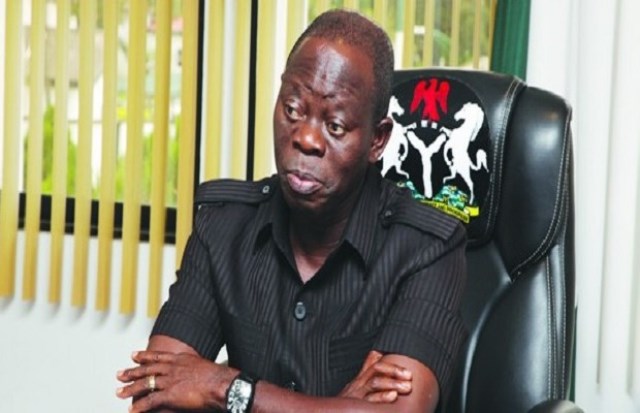 Governor of Edo State, Adams Oshiomhole has assured internally displaced persons, IDPs, residing in the state that the threats issued by security operatives that they would be evacuated would not be carried out.

Security operatives in the state had threatened to evacuate the IDPs to Jigawa and Kano states, a move that had been stoutly resisted by the IDPs.

However, on Tuesday, Oshimhole said he was not aware of the threat.

He said no one would be moved out of the state against their will, adding that he had to travel to see President Muhammadu Buhari to allay the fears created by the controversy.

“I am not aware of attempt to relocate them. But I think this is as a result of communication gap. The recent issue was just because of the impression that some of the kids wanted to reunite with their parents, but we said it was better for their parents to come here and see their children. It is very touching seeing these kids, I think the good news is that the Edo state government will take over their welfare, we will treat them the same way we treat every other child in Edo state,” the governor said.

He promised that the state would build a school also employ teachers to train the children while also building more hostels to take accommodate them.

The governor said that he had already met with the commissioner of education on how educational facilities could be quickly constructed to aid the development of the children.

He said as long as the IDPs elect to remain in the state, no one would drive them out.

He also promised to provide the necessary facilities to make their stay comfortable at the camp.
He said the welfare of the kids was top priority for the state.

“Everybody is concerned that the kids should be saved. Nobody had any negative motive in moving the children. Having lived in the North all my life I believe any where any Nigerian finds himself should be his home. That is why we abolished the indigene policy in this state. What is important is that these children are no longer orphans. We will treat them like our children,” Oshiomhole said.

There was a brief period of excitement and laughter when the governor interacted with the IDPs in Hausa language.

During the interaction, lunch packs were distributed to the children by members of the governor’s team. This was in addition to 500 bags of rice and five cows given out to assist in the feeding of the IDPs.