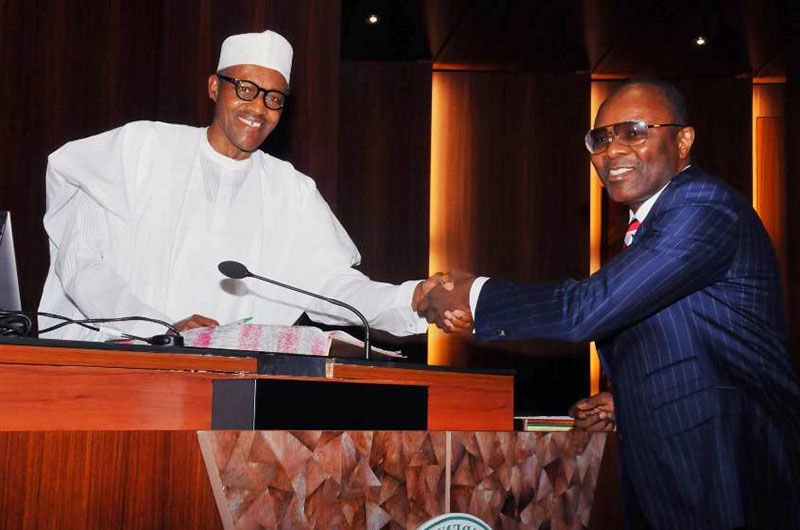 At home we face enormous challenges. Insecurity, pervasive corruption, the hitherto unending and seemingly impossible fuel and power shortages are the immediate concerns. We are going to tackle them head on. Nigerians will not regret that they have entrusted national responsibility to us. — Muhammadu Buhari May 29, 2015.

Nigerians are already regretting entrusting leadership to President Muhammadu Buhari. Although on assumption of office in 2015, he promised to tackle the problem “head on”, Buhari the President will only take secondary seat in the apportioning of blames for the raging fuel scarcity. But, as you will find out if you read the next few paragraphs, this does not in any way excuse the man from culpability in the mess.

In what we were made to believe was his determination to clean up the notoriously opaque and corrupt oil industry, Buhari refused to appoint a Petroleum Minister, consequently ensuring that while he can escape immediate blame for the farcical goings-on in other ministries, he will be primarily held responsible for the oil ministry’s shortcomings. This is why this piece is about Muhammadu Buhari the Minister — not Muhammadu Buhari the President.

With the benefit of hindsight, Buhari didn’t quite understand the intricacies of the ministry he appointed himself to oversee. As has already been seen of his party, the All Progressives Congress (APC), Buhari was desperate for power but wasn’t desperate to govern. That is why, for example, it took him six months to appoint ministers. How does a man run the full length of an electioneering cycle without already identifying the core of the people he would work with?

At the risk of committing reductionism, Buhari needed to answer two questions that were critical to the continuous availability of petrol: does the government rehabilitate the refineries or privatise them? And how do we strengthen the purchasing power of marketers, given the weak value of the naira?

On the first, Kachikwu, then Group Managing Director (GMD) of the Nigerian National Petroleum corporation (NNPC), never hid his belief that the refineries should be sold, as they were working at 30percent capacity. But Buhari overruled him. Two-and-half years after, what do we have? None of the refineries operates at 60 percent capacity; and all, combined together, only produce 5percent of the country’s daily petrol need of 30million litres/day. So, on the score of raising in-country refining capacity, there has been no progress.

On the second, fuel marketers are in a worse situation now than they were in May 2015: The naira isn’t stronger against the dollar. When Buhari assumed office in 2015, the naira traded at 199 to a dollar at the inter-bank market. Today, it is 359, courtesy of a string of questionable moves, including stubbornly refusing to devalue the currency when self-devaluation was already evident at the parallel market and arresting BDC operators in a failed military-style effort to control the currency (which boomeranged, anyway). The naira is far more unstable now than it was in 2015, no thanks to the operation of at least five exchange rates: the official CBN rate, BTA rate stipulated by CBN for banks, parallel market rate, investors and exporters window, and the inter-bank rate. Confusing!

At the black market — arguably the most important given the difficulty of accessing the dollar at official rates — the dollar currently sells for N367. With all these figures, compared with the N197 exchange rate of the naira back in May 2016 when the pump price of petrol was raised to N145/litre, and coupled with the greed of fuel marketers, it was only a matter of time before the fuel scarcity of March 216 returned.

Now, having teleguided the Central Bank of Nigeria (CBN) all tenure, and having arrogated the leadership of the petroleum ministry to himself, Buhari, as Petroleum Minister, should be taking responsibility for the crisis; and his sycophantic Federal Executive Council (FEC) should be giving him, not Kachikwu, the marching orders to resolve the crisis. Worryingly but unsurprisingly, Buhari has remained aloof, watching in the background — maybe not even giving a damn — as Kachikwu and Maikanti Baru deal with the mess of discussing the scarcity with the media and the larger public.

From the beginning of the crisis till at least December 23, when he finally held a meeting with Baru, it can be argued that Buhari was unaware of the severity of the fuel crisis. The interpretation is that he abdicated his self-set responsibility as Petroleum Minister. Unless Buhari really thinks Kachikwu is Fuel Scarcity Minister, it is improper for him to name himself Minister yet disappear and push kachikwu forward in periods of PMS scarcity. That’s not leadership. At this point, Buhari the Minister should not be waiting for briefings from Kachikwu or Baru. What would it cost him to get on a helicopter and fly round three sample states, for example, to see the sufferings of the people and feel their fury with his government — to see the failings of a ministry he oversees?

To further heighten the grief of the people, Buhari released a Christmas Message to Nigerians without mentioning the fuel hardship. The 12-paragraph statement talked about the joy of Christmas but evaded the pain of the scarcity. Terrible if Buhari didn’t know about the scarcity at the time, unforgiveable if he deliberately ignored us.

When he finally spoke, it was under suspicious circumstances. At 7:58am on December 24, Atiku Abubakar — and this should not be misconstrued as an endorsement of the candidature of Nigeria’s most partisanly unstable politician — tweeted to assuage the fuel scarcity-induced pains of the people. More than five hours later, Buhari made his first public utterance on the scarcity. So, what changed between Saturday, when the President released his Christmas Message, and Sunday? If Atiku, likely his number-one challenger in 2019, didn’t talk, would the President have spoken?

And what did he say? Buhari the Minister said he was “being regularly briefed” by the NNPC; briefed about his own ministry! He “sympathised with all Nigerians”, as though we are all beggars whom his administration is distributing petrol to without charge. And, finally, he told us not to expect any more comments on the matter from him; this is how he disguised it: “Let me also assure that the relevant agencies will continue to provide updates on the situation.”

Buhari cannot be approving multi-million-dollar Crude term and Direct Sale Direct Purchase (DSDP) contracts in his capacity as Petroleum Minister and then vanish into thin air in moments of fuel scarcity. It’s nothing other than cowardice, and is least expected of one with the reputation of military might. He must ask himself, too, what he really wants to do with the first-class brains and innovative governance approach of Kachikwu. Is fuel supply management all Buhari needs Kachikwu to do? It’s time Buhari manned up to the numerous and enormous responsibilities of the Petroleum Minister or appointed someone else — whether Kachikwu or someone else from the North as usual — to do the job!

INNOSON VS GTB: Facts behind figures: How the battle between Innoson and GTB started (I)