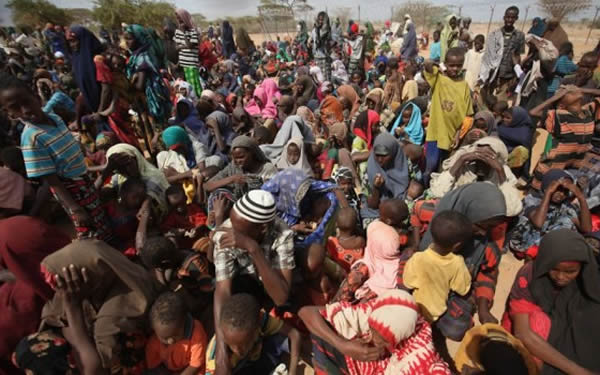 President Muhammadu Buhari has intervened in the outbreak of malnutrition at the Bama internally displaced persons, IDPs, camp with the delivering of drugs and food items.

Troubled by the development, the President dispatched a team which was led by his Special Adviser on Social Investment, Hajiya Uwais, to Bama with drugs and food items.

Uwais, in her address to the IDPs, acknowledged the enormity of the challenges they faced and assured them that President Muhammadu Buhari was concern and commitment towards addressing their plights.

“We are here to see for ourselves the situation on the ground here and to report back to the president,” Uwais said. “The Federal Government would continue to lead the efforts towards helping you as well as other internally displaced persons until you are finally resettled back to your communities.”

Uwais commended the military for their gallantry and dedication to securing and caring for the displaced persons, and assured that the Federal Government would work with the State government, international community, local partners and civil society groups to ensure that all the needs of the inhabitants of Bama camp, and the several others like it, are speedily met.

Mariam Masha, Senior Special Assistant to the President on IDPs, who was also in the entourage assured that alongside the humanitarian work, the Federal and State Governments are also focusing on the longer-term work of ensuring that reconstruction and resettlement programme is hastened to enable the IDPs return to their homes and communities, and rebuild their lives and livelihoods.

She said that the level of humanitarian crisis in Borno State is expected to go up as the military continues to liberating more communities from the grip of Boko Haram, hence the need for increased support from all partners and stakeholders.

Mohammed Kana, North East zonal coordinator of National Emergency Management Agency, NEMA, disclosed that the Federal Government through the Presidential Initiative For North East had commenced the construction of 500 new tents each in some identified camps In Maiduguri as well as all the satellite camps including Bama, Dikwa, Moguno and Konduga.

He assured that NEMA would continue to deliver food items to the IDPs and ensure that they are comfortable at the camps.

The delegation, which included senior officials of the Borno State Government, officials of the NEMA,  the State Emergency Management Agency, and representatives from the United Nations, was taken around the camp which houses about 25,000 people, by the Brigade Commander of the 21 Armoured Brigade, Bama,  Adamu Laka.

The Commander highlighted the challenges faced in the camp, including shortages of medical personnel, shelter, water and sanitation facilities.

Haruna Msheila, Borno State commissioner for Health said that 1,800 of the most vulnerable persons in the camp had been relocated to Maiduguri for proper medical attention and specialized feeding, and that the relocation is an ongoing exercise.

He added that a permanent health team had been working in the camp since May 2016, and that the existing team still required a lot of support.

Msheila however said that recent reports of acute malnutrition and deaths in the camp were exaggerated as the state government with the supports from the Federal Government and other development partners had been doing their best to assist IDPs in the Bama camp and throughout state.

About 50 additional persons identified with cases of malnutrition in the camp were immediately transported by the assessment team to Maiduguri during the visit. Three truckload of food items and drugs from NEMA were also delivered to the IDPs.

ICIR reporter, Malik Samuel who visited Maiduguri in May, had reported large scale of malnutrition and poor sanitary conditions in IDP camps.

This seemed to be corroborated by a UN  investigation which warned that the country could be losing five IDPs every hour if nothing was done to improve feeding, medicare and sanitary conditions in the various IDP camps.

Chat us on WhatsApp
Advertisement
Previous articleCBN To Support Corps Members’ Business Plans With N2.5bn
Next articleEcological Funds: Living At The Mercy Of Floods 1