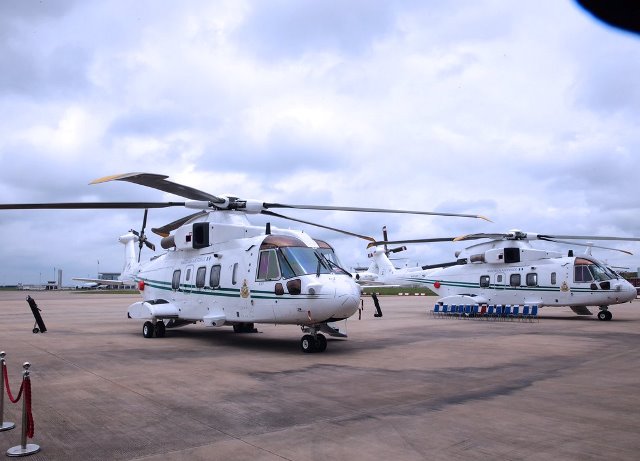 One of the presidential aircraft handed over to the Nigerian Air Force by the Presidency in October has been involved in a crash in Makurdi.

The aircraft, an Agusta AW 101, which is a medium-lift helicopter specially designed for military operations, crashed less than a month after the Nigerian Air Force took delivery of it from the presidency according to a report by an online news medium, thenewsguru.com.

The report, noted however that Public Relations Officer of NAF, Dele Famuyiwa, a Group Captain, explained that what happened to the aircraft cannot be described as a crash.

“It was not a crash. I wouldn’t call it a crash because it just fell on the ground in Makurdi,” he was quoted as saying.

“I can say maybe it was an incident. You know accident is a higher degree of incidence.

“It was just an occurrence that did not take any life or equipment. Cars can malfunction and the same thing with any machine.”

Famuyiwa was quoted as explaining that the incidence was not as a result of poor handling, saying that the same crew which managed the aircraft at the presidency was still responsible for its management at the air force base.

However, the Air Force Public Relation Officer in Makurdi, Okon Bassey, when contacted by journalists, claimed that he has no knowledge of the incident.

He said that he is presently not in the state, but rather undergoing a course in Lagos.

His assistant, who simply gave his name as Gambo, said that nothing like that happened at the air base.

“It is a rumour; many people have been disturbing us concerning this thing, but I can confirm to you that nothing happened.”

Days before the handover, the presidency had advertised two other presidential aircraft on some of the country’s daily newspapers.

Receiving the aircraft at a ceremony at the Presidential wing of the Abuja Airport, the Chief of Air Staff, Sadique Abubakar, said that one of the aircraft would be configured and deployed as ambulance while the second would be deployed as troop carrier, especially for operations against the Boko Haram sect in the North-eastern region of the country.

Agusta AW101, which is a large armoured helicopter cost about $21million each (N10.5billion) making it 130% more expensive than the average aircraft of its class.