Presidential aspirant Omoyele Sowore planning to defeat Buhari with ‘$200 each from 100,000 Nigerians’ 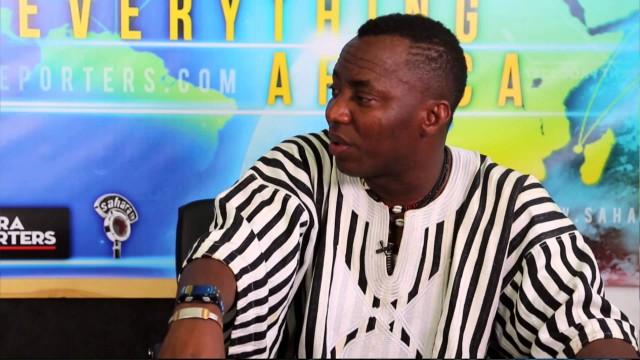 Omoyele Sowore, Publisher of the whistle-blowing newspaper, Sahara Reporters, says he is running for Nigeria’s number one office in order to change the purposeless leadership that has come to define the country’s politics.

To realise his ambition of defeating President Muhammadu Buhari in 2019, Sowore is banking on a contribution of “$200 per person from 100,000 Nigerians”.

He said the Buhari administration has recorded zero achievement on the core areas of his campaign, namely: anti-corruption, anti-terrorism and economic stabilisation.

“Buhari’s appeal was supposed to be a tough stance against corruption and an ability to address the security crises posed by Boko Haram,” Sowore said during an interview with Premium Times.

“No single major victory has been notched in the anti-corruption fight. Boko Haram is still alive and kicking. And the President’s inaction and lack of leadership is causing the herdsmen-farmers conflicts to take on an even more dangerous dimension. The Nigerian state is in a shambles.”

Elections in Nigeria cost a lot of money, but Sowore is confident of raising the required funds.

“We will be sourcing funds directly from the Nigerian people. Nigerians have demonstrated a capacity to devote their resources to projects that they believe in,” he said.

“The recent team that represented Nigeria in bobsledding at the Winter Olympics raised almost $200,000 – a lot of it from Nigerians. We are already seeing and receiving commitments for support.

“Our approach will revolutionize the way politics is funded in Nigeria. There is also a lot of support that is coming in the form of goodwill donations.

“We also have something that counts for a lot – an army of technology savvy supporters and media platforms that will amplify our voice to the Nigerian people.

“Barack Obama raised millions of dollars from Nigerians in the US alone in 2008/2009 and subsequently after.

“100,000 Nigerians contributing $200 per person can help fund a clean election devoid of dirty money. With that, we can win the Presidency and bring them back a lot of change!”

Sowore, who is currently based in the United States of America, said he is already doing underground mobilization and advocacy in and outside Nigeria.

“The efforts to mobilize progressives and to form a coalition of progressive parties and organizations is underway. I am using my time in the U.S. to mobilize diaspora Nigerians,” he said.

“This weekend, for instance, I will be holding a town hall in Maryland with Nigerians. I am also spending a great deal of my time meeting with my strategy and policy teams – members of whom include some really accomplished Nigerians.

“Unknown to many I have been on the ground Nigeria in the last two months.The work goes on. I will certainly be spending more time on the ground in Nigeria.”

Nigeria’s population is made up of majorly young people and it is obvious that the 2019 general election will be won by the candidate h appeals most to the youth.

“If there is anything we have learned in the last few years, it is the fact that the Nigerian electorate has become impatient with purposeless leadership. My candidacy is generating significant interest across Nigeria, especially amongst the youth. The youth demographic is the largest single voting block,” Sowore said.