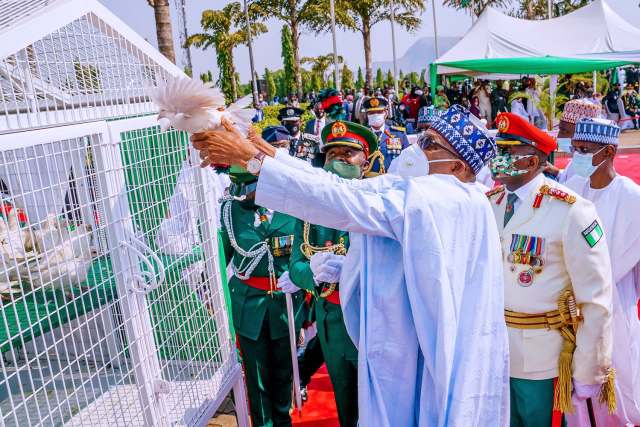 NIGERIANS on social media have expressed mixed reactions as pigeons released by President Muhammadu Buhari to mark this year Armed Forces Remembrance Day in Abuja, on Friday, refused to fly.

President Buhari was seen in footage by Channels Television on Twitter opening the birdcage, picked up one of the birds and threw it into the air but the bird landed on the cage and refused to fly. He subsequently took off the cover of the cage to free the entire birds but they refused to fly.

Something similar happened in 2014 when the pigeons refused to fly when former President Goodluck Jonathan freed them. The Spiritual Director of the Adoration Ministry Enugu, Rev Fr. Ejike Mbaka, described the incident at the time as a sign that God had abandoned Jonathan.

The ritual of releasing pigeons is to commemorate the life of a departed loved one and is common at significant events like funerals or memorials. It also signifies peace.

Some Nigerians, have however described the refusal to fly as a ‘sign that there is no peace in the country.
Below are some comments gathered by The ICIR.

There's no peace in Nigeria. There's no progress being made. And there's no harmony among us. So the pigeons refused to fly

Unbothered and unhinged, Buhari didn't hesitate to leave the birds. Like he does with Nigeria and Nigerians

These pigeons reminds me of some Nigerians, no matter how much you show them the light, set them free on the right path, they will still return to their cage. They love their slave masters & don’t know what to do with freedom when they get it.

Just imagine the pigeons sef refuse to agree with the commentary..they refuse to fly. If men can discern the times ordinary birds are discerning the times that we don't have peace in the country 😂

Let me tell you the symbolic reason why pigeons are released to fly.

It is to signify peace, harmony and security in the country.

The pigeons refused to fly!

Every spokesmen of this administration are doing a very difficult job. To have deliberately stripped themselves of sense,go back home to their loved ones later in the day to relieve their cheer idiocy.

This birds are even against this government…Them no gree fly high…some dey fly high dey come back… pic.twitter.com/nRyzKQPcrF

This reminds me of religious leaders in Uganda who released pigeons for a peaceful elections 🤣 #UgandaDecides2021 pic.twitter.com/e3l8H9CKPS

This was what happened in 2014 when they refused to fly for Jonathan. I remember Father Mbaka saying that it was a sign from God that Jonathan had been rejected by Heaven. I wonder how the controversial priest will interpret this one. 😆

I guarantee you… If it was possible, the DSS would arrest the pigeons for such an affront on the President.

But really, is there peace, harmony and security in the land?

Caged birds will fly once the cage is open.

My man opened the cage, they even tried to push the pigeons to fly. Omo them no gree 😭😭😭.

There's no peace in Nigeria. There's no progress being made. And there's no harmony among us. So the pigeons refused to fly

Unbothered and unhinged, Buhari didn't hesitate to leave the birds. Like he does with Nigeria and Nigerians

What I said in my Christmas message -Kukah

How push for investigation of corruption allegations…