Report that Nigeria plans to power 5 million homes with N2.3 trillion is MISLEADING

Factcheck
By Olugbenga ADANIKIN On Sep 9, 2020 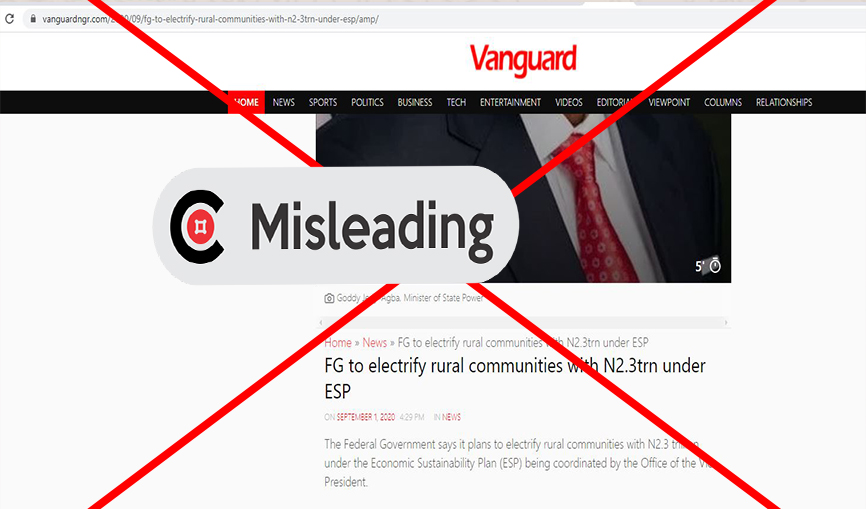 THE Vanguard newspaper, one of Nigeria’s national dailies had on September 3, reported that the Nigerian Government has concluded arrangements to expend N2.3 trillion on electrification of rural communities, targeting five million homes, under the Economic Sustainability Plan, ESP.

The report has the headline “Rural electrification: FG earmarks N2.3tn for 5m homes”. A similar version of the article was reported two days earlier by the newspaper with the headline “FG to electrify rural communities with N2.3trn under ESP”.

This assertion was repeated in the lead – first paragraph – of both reports and was attributed to Goddy Jedy-Agba, the Minister of State for Power.

He was said to have allegedly made the assertion in Abuja, Nigeria’s capital at the inauguration of a 12 KiloWatts Peak (KWP) Volsus Solar for Health (VSFH) Mini-grid, alongside a 58 KWH Battery Bank at Karu Primary Health Centre.

Since the report was published by the newspaper, it has been shared and reported by several online publications.

Breaking.com, latestnigeriannews.com also reported the story, both crediting Vanguard newspaper, except newswirenigeria.com which did an independent report.

More so, Vanguard newspaper, with over 2.6 million followers on its verified social media account further tweeted the article.

That Nigeria will spend N2.3 trillion from the Economic Sustainability Plan (ESP) to power 5 million homes. 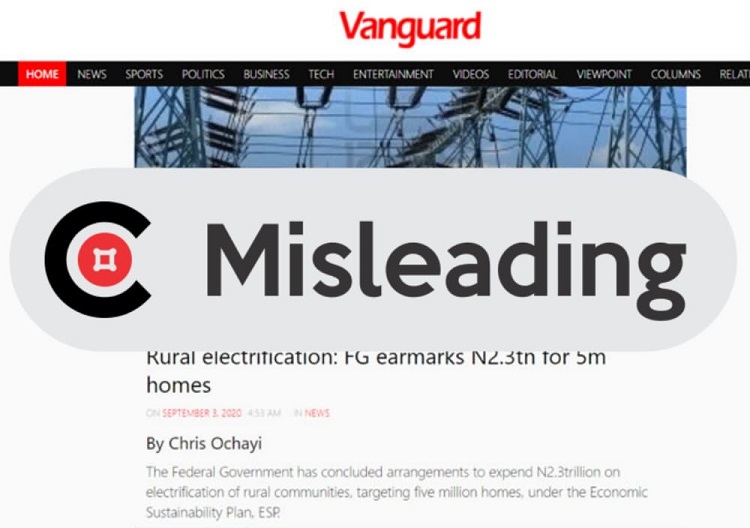 Nigeria’s Economic Sustainability Committee (ESC) was introduced by President Muhammadu Buhari-led administration at the wake of the Coronavirus  (COVID-19) pandemic.

Vice President, Professor Yemi Osinbajo was appointed Chairman of the committee and part of their responsibilities was to see how the nation’s economy could survive through the pandemic, convert the threats posed by the disease to opportunities and create more jobs.

“We must communicate to our people where we are now, and that we can no longer assume we are still where we used to be,” Osinbajo stated on April 2, at the inaugural meeting of the committee.

“We are faced with a challenge that no government in the history of Nigeria has ever faced. So, we have to redesign our economic planning and change our thinking.” 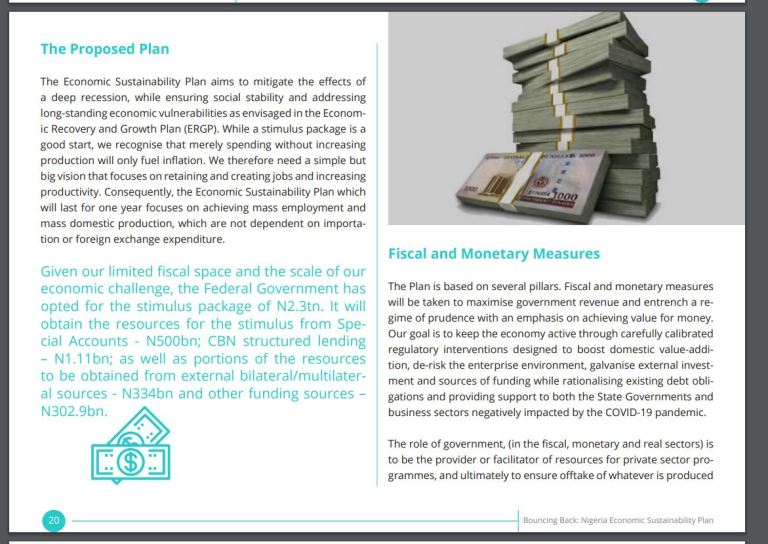 In June, the Federal Executive Council (FEC) eventually approved the N2.3 trillion stimulus plan for the entire economy, but not just for one project as claimed by the Vanguard newspaper report.

The ESP which can be found on the country’s Budget office website gives the total budget to be N2.3 trillion. The document further detailed how the sum would be expended on different project across different sector of the economy. Solar power energy targeting five million homes is one of such projects.

A part of the document reads: “Given our limited fiscal space and the scale of our economic challenge, the Federal Government has opted for the stimulus package of N2.3tn. It will obtain the resources for the stimulus from Special Accounts – N500bn; CBN structured lending – N1.11bn; as well as portions of the resources to be obtained from external bilateral/multilateral sources – N334bn and other funding sources –N302.9bn.” 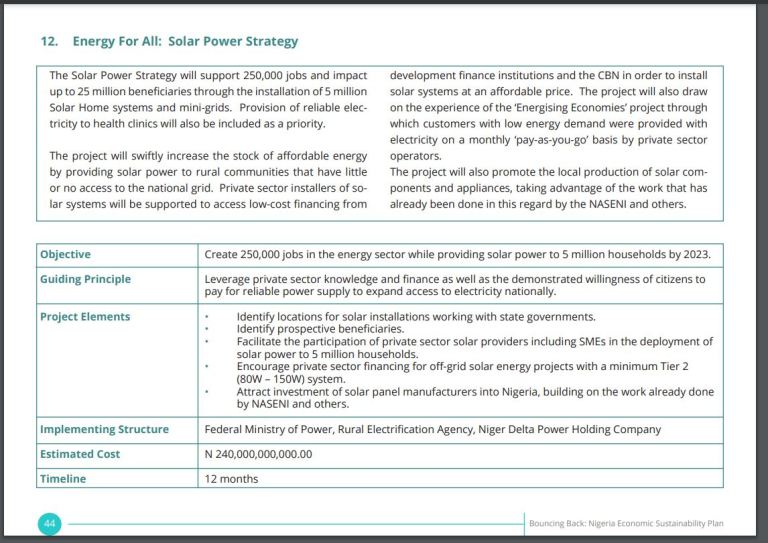 From the ESP it can be seen that N240 billion was budgeted to provide solar power to 5 million households by 2023, not N2.3 trillion as reported.

In addition, FactCheckHub got a copy of the Minister’s speech read at the solar power project commissioning, dated September 1, 2020, where he reiterated the government’s plan to utilise part of the N2.3 trillion fund for the solar home system project.

The minister said: “To emphasise the focus government is giving to electrifying rural communities, there are plans under the 2.3 trillion-Naira fund for the Economic Sustainability Plan (ESP) being coordinated by the Office of the Vice President, to provide Solar Home Systems (SHS) to five million homes across un-served rural communities in Nigeria”.

Incidentally, this same quote was included in the sixth paragraph of the Vanguard’s report.

The minister clearly stated that the SHS is part of the 2.3 trillion ESP project and not that the government earmarked N2.3 trillion as reported.

VISION 2050: Buhari plans to lift 100m Nigerians out of poverty seven years after his tenure

Did Sale Mamman raise $1.6billion for TREP within one year as Nigeria’s minister of…