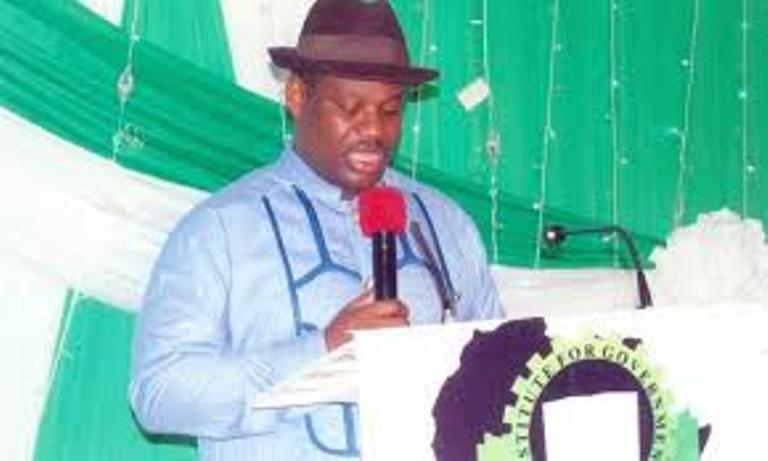 The All Progressives Congress, APC, in Rivers State on Sunday suffered a major setback as the deputy governor, Tele Ikuru, dumped the party for the People’s Democratic Party, PDP.

Ikuru, a major ally of Rivers State governor, Rotimi Amaechi, announced his defection in Port Harcourt, the state capital at about 4 p.m on Sunday.

The news of Ikuru’s defection is coming barely six days to the presidential election and the deputy governor, who has worked with the Rivers State governor for about eight years, may be received by President Goodluck Jonathan at a PDP stakeholders’ meeting in Port Harcourt today.

Describing the APC as party of “rebels, insurgents and anarchists clothed in robes of pretense and deceit” in a press statement issued in Port Harcourt, the deputy governor stated that he had joined the APC out of disillusionment but was even further disillusioned within the ranks of the opposition party.

“Recall that in December 2013, out of extreme loyalty to my boss and friend, I   joined the APC, along with other then disillusioned Rivers people.

“Ever since, as the true nature and motives of APC are unveiled, I have continued to twist and turn in extreme mental and emotional agony. The more I struggle to belong, the more the Rivers man in me rejects the APC,” Ikuru stated.

He said that he had done a careful study and analysis of the leadership of the APC and reached the conclusion that it is a party of rebels, insurgents and anarchists, clothed in robes of pretense and deceit.

Feelers within the government house have revealed that since there was no bad blood between the governor and his deputy, this decision to move from APC was probably due to the influence of the deputy national chairman of the PDP, Uche Secondus had on him.

Secondus who is widely regarded as Ikuru’s political godfather, is said to have influenced the deputy governor’s major political appointments since Ikuru’s foray into politics.

Ikuru was first elected deputy governor to Celestine Omehia in 2007, before his removal by the Supreme Court after about six months in office. When Amaechi was sworn in as governor, he retained Ikuru as his deputy and they both fought against the interests and allies of the former governor of the state, Peter Odili.

Ikuru reportedly remained loyal to the governor and fought on the same side when Amaechi fell out with the leadership of the PDP and defected to the APC with majority of his aides.

News of the deputy governor’s defection to the PDP broke on Sunday when a Government House source confirmed his departure from the APC.

Reports indicate that Amaechi had called his deputy on Saturday to ascertain where the deputy governor was, and Ikuru, who at the time was reportedly in his hometown in Andoni Local Government Area of the state concluding his defection to the PDP, reportedly assured the governor that he would see him on his return to Port Harcourt.

However, the deputy governor did not report to Amaechi on his return to the state capital on Saturday.

The news of the defection portends a game-changer in the oil-rich state where a former minister, Nyesom Wike, is contesting for the gubernatorial seat under the aegis of the PDP.

Responding to the news of his deputy’s defection, Ameachi described it as shocking.

A statement by the Rivers State commissioner for Information and Communication, Ibim Semenitari, on Sunday stated that the governor received the news of Ikuru’s resignation from the APC on Sunday with shock.

“He however wishes to note that the reasons adduced by Engineer Ikuru are shocking as Deputy Governor lkuru has consistently been the one driving political activities in his local government area of Andoni. He has also been the second in command driving politics and governance in Rivers State,” the statement said.

The commissioner noted that the governor accorded Ikuru “all the privileges and respect due the office of the Deputy Governor and has treated him with love as a friend and brother.”

Semenitari said that the governor had hoped that “the numerous rumours of Engineer Ikuru’s double-faced membership of the APC and open romance with the PDP were not true, but he however appreciates the fact that every individual has a right to pursue his political dreams, as he deems most appropriate.”

She, however, said that governor wished Ikuru the best in his future political endeavours.