PAYMENT of workers’ salaries, training of staff, cost of running offices and related matters will consume 73 per cent of the budget proposed for health by the Nigerian government in the 2022 fiscal year.

Of the nearly N16.4 trillion Appropriation Bill, the Federal Government allocated N711.28 billion to the health sector. Also, the government proposed N54.87 billion as grants from the Global Alliance for Vaccine and Immunisation (GAVI) to support immunisation.

A breakdown of the budget shows that the recurrent budget for health by the Federal Government is about 72.6 per cent of the fund proposed for the sector, while the capital budget stands at 27.35 per cent.

A further breakdown of the health budget reveals that the country has again reneged on its vow to commit at least 15 per cent of its budget to the sector in what is famously known as the Abuja Declaration.

The total proposed budget for the fiscal year 2022 is N16.39 trillion.

The budget for health (N766.15 billion, inclusive of GAVI grant) is 4.67 per cent of the national budget, which is far too low to the 15 per cent minimum pledged in the Abuja declaration. 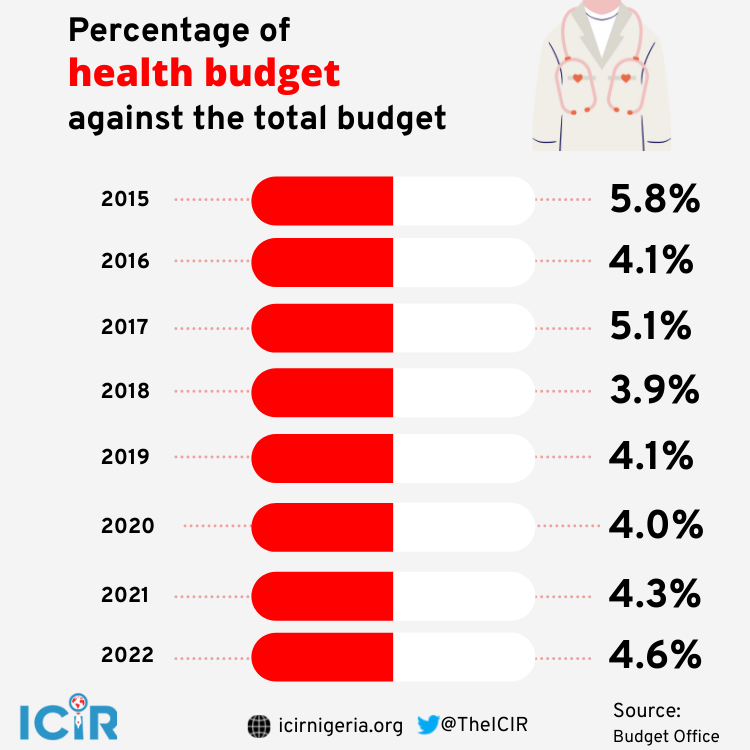 Recurrent expenditure takes 73 per cent of the budget for health.

Budgetary allocation to the health sector by the Federal Government has revolved around four per cent of the national budget for years.

In 2016, the Federal Government had a budget of N6.06 trillion, out of which it earmarked N550 billion to the health sector. The amount represented 4.1 per cent of the budget.

The budget remained low in 2020 and 2021, despite the emergence of COVID and its attendant impacts on the nation.

Out of the 2021 budget of N13.6 trillion, recurrent and capital expenditures valued at N380 billion and N134 billion, respectively, were allocated to the health sector, amounting to N549 billion, inclusive of the Basic Health Care Fund  The amount represented 4.3 per cent of the budget.

The ICIR reports that the government has sustained its low budgets for health amidst increasing poor health infrastructures, brain drain of health professionals, rising poor health indices and disease burdens, as well as COVID-19 threats.