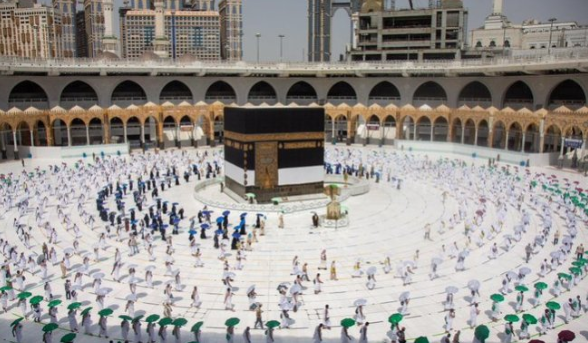 THE Kingdom of Saudi Arabia has announced that the 2021 annual Hajj pilgrimage to Mecca scheduled to begin in mid-July is to be limited to only 60,000 residents.

Muslims who are not resident in the country will not participate in the pilgrimage this year.

A statement released by the Saudi Arabian Hajj Ministry on Saturday cited the COVID-19 pandemic, particularly the emergence of new variants of the disease, as the reason for the development.

Only around 1,000 pilgrims attended Hajj 1441 due to social distancing guidelines but the number of pilgrims has now been increased to 60,000 persons drawn from citizens and all nationalities resident in the Kingdom of Saudi Arabia.

Secretary-General of the MWL Mohammed bin Abdul Karim Al-​Issa said that a number of senior Mufti and scholars of the Islamic world also welcomed the decision, adding that Sharia (Islamic) Law stated that it was imperative to take all safety precautions during such pandemics.

About 1,077 new cases of the coronavirus have been confirmed in the Kingdom over the last 24 hours, bringing the total number of infected persons to 464,780.

Also, 16 COVID-19 related deaths were confirmed on Saturday, raising the total number of fatalities to 7,553, according to Saudi Arabian Ministry of Health.

THE All Progressives Congress (APC) has rescheduled its presidential primary election to Monday, 6th,...

A former presidential aspirant on the platform of the People's Democratic Party (PDP), Peter...
Advertisement