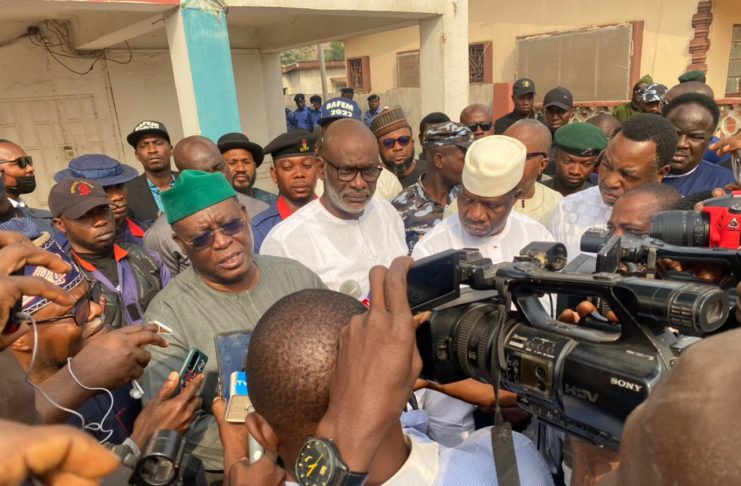 SEVEN governorship aspirants of the All Progressives Congress (APC) have protested against irregularities dotting the conduct of the party’s governorship primary in Ekiti State.

The aspirants, in a joint statement on Thursday, alleged that the process had been hijacked by party executives to  favour Biodun Oyebanji, the anointed candidate of the incumbent Governor Kayode Fayemi.

The aspirants include: a serving member of the National Assembly Opeyemi Bamide and former Minister of State for Works Dayo Adeyeye.

“The seven aspirants herein received with rude shock and dismay the purported list of the local government election committee and ward election committee made up solely by party members and political appointees that had before now openly endorsed the candidacy of Biodun Oyebanji the immediate past secretary to the state government,” the joint statement had said.

“It is on record that the government of Governor Kayode Fayemi has given its unwavering support to the candidacy of Biodun Oyebanji, it is common knowledge that the Governor and most appointees of the governor are openly rooting for and supporting Biodun Oyebanji’s aspiration to become the flag bearer of our great party.

“What is more disturbing is the fact that a simple glance at the names of the persons appointed as members of both committees would reveal that it is made up of appointees of government who are all supporters of a candidate in the primary election they are appointed to superintend on.”

The aspirants worried that the party’s chance in the June 18 governorship election might be undermined if nothing was done to address the irregularities.

They asked that another independent body be constituted to give every candidate a level-playing field.

Unlike the People’s Democratic Party (PDP), the APC made use of direct primary as party members voted ward to ward.

In some of the wards visited by this reporter, delegates were seen chanting and carrying banners bearing Banji Oyebanji’s name in the presence of security operatives deployed to the venues.

In Ward 4, Ado Local Government Area, Oyebanji was there as the sole winner. The Ward electoral Chairman Ajibola Haruna said he polled 1007 to defeat other aspirants.