Slain 43 Borno Farmers: Does Buhari have a template for condolence messages?

ON Saturday, 28th November, Nigerians were again reminded of the unsafe condition of their country when the news of 43 farmers killed by the dreaded Boko Haram terrorist group were broken.

The northeastern part of the country has been in major crisis due to incessant killings by terrorist groups, bandits and inter-communal clashes.

While this is becoming a fearful norm in the region and other parts of the country, Nigerians are worried over the decreasing hope that the killings would end anytime soon.

In response to the killing of 43 farmers in Maiduguri, the Borno State capital, President Muhammadu Buhari released a statement through the official Twitter handle of Garba Shehu, the Senior Special Assistant to the President on Media and Publicity.

“President @MBuhari has expressed grief over the killing of farmers on rice fields at Zabarmari, in Jere Local Government of Borno State, describing the terrorist killings as insane.

“I condemn the killing of our hardworking farmers by terrorists in Borno State. The entire country is hurt by these senseless killings. My thoughts are with their families in this time of grief. May their souls Rest In Peace.

President Buhari said the government had given all the needed support to the armed forces “to take all necessary steps to protect the country’s population and its territory,” the statement read.

In a tweet response to the statement, a Twitter user who identifies as PH Made Alpha Male said the Special Assistant has been repeating the same narrative over the ugly incidents in Nigeria.

“Dear Garba, are you not worried that you keep repeating the same narrative to ugly events in this country,” the Twitter user said.

Like the user, some other Nigerians in quote replies to the statement asked similar questions, some are of the opinion that the President is not even aware of the incident.

As they mourn the killing of the farmers, a similar question in their tweets is, does Buhari have a template for condolence messages?

The ICIR takes a look at Buhari’s statement on the 43 farmers in comparison to other statements made about ugly events, killings and deaths in the country.

In the first paragraph, the key-phrase is ‘express grief’ and the description of the terrorists as ‘insane’.

While the word ‘insane’ is uncommon in the president’s statements, on too many occasions, Buhari has been found to have used the same words ‘expressed grief’ over killings or death. 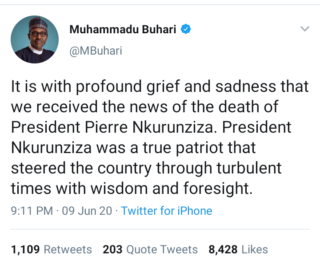 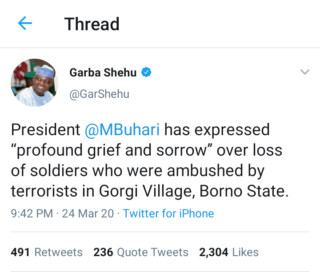 Tuesday, 24th March, Buhari in his reaction to the killing of 47 Nigerian soldiers expressed grief but this time it was ‘profound grief and sorrow’.

January 5, 2019, Buhari ‘expressed grief’ over the death of late Air Vice Marshall Hamza Abdullahi, a former minister and military governor, according to a statement signed by Femi Adesina.

“President Muhammadu Buhari has expressed his profound grief and sorrow over the death of Air Vice Marshall Hamza Abdullahi (Rtd), a one-time Minister of the Federal Capital Territory, FCT who also served as the military Governor of Kano State under him when he was the Military Head of State,” the statement read.

Below are snapshots of the many times the President has expressed ‘grief’ over death and killings in Nigeria. 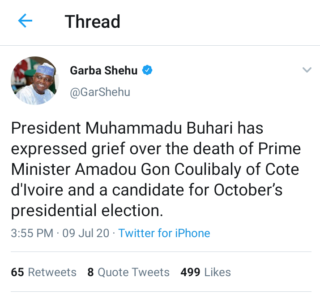 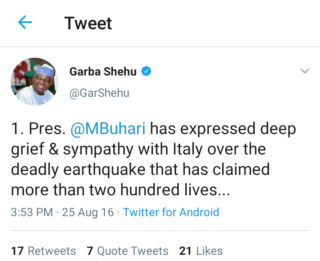 In the second line of the Borno Farners statement, Buhari said ‘I condemn the killing of our hardworking farmers by terrorists in Borno State. The entire country is hurt by these senseless killings. My thoughts are with their families in this time of grief. May their souls Rest In Peace’.

The keywords are ‘condemn,’ and ‘rest in peace’.

Just seven days ago, Buhari had ‘condemned the killing of Phillip Shekwo, the Chairman of the All Progressives Congress (Nasarawa State) and also said ‘may his soul rest in peace’.

Buhari said: ‘I strongly condemn the killing of Philip Shekwo’ and in the last line said ‘may his soul rest in peace’.

“I strongly condemn the killing of Philip Shekwo. He was kind and jovial. His contribution towards strengthening the party in Nasarawa State will not be forgotten. May his soul Rest in Peace,” Buhari said. 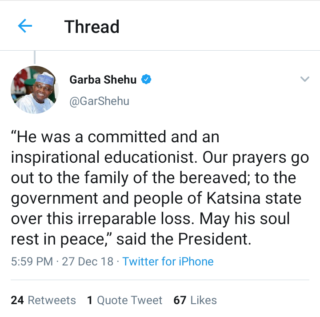 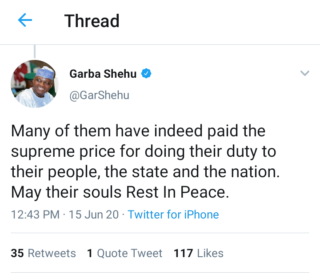 Also in 2017, Buhari in reaction to the killing and attack of a market in Benue state also said he ‘condemns’ such action.

“The President condemns the wicked attack and directs security agencies to begin an immediate investigation with a view to bringing the perpetrators of the dastardly act to book,” Shehu’s statement on behalf of the president read.

Similar occurrences can be seen in the image below:

As usual, the president ‘griefs’, ‘condemns’ after the news of the deaths of innocent Nigerian citizens.

Buhari’s messages on national crises have come under several scrutiny most especially during the ENDSARS protests in Nigeria.

Nigerians still wonder whether the President has a template for condolence messages.

FCT, Kaduna remain places where Nigerians are most likely to…