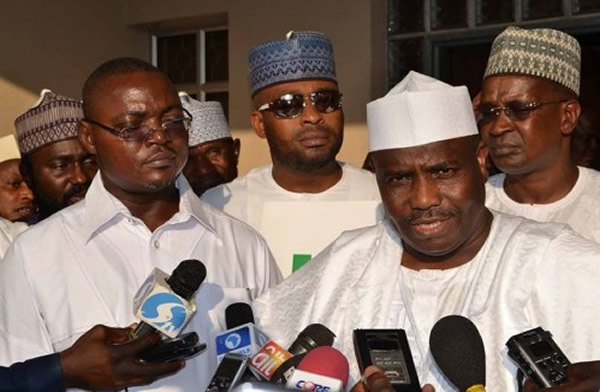 Speaker of the House of Representatives, Aminu Tambuwal and former Federal Capital Territory, FCT, Nasir el Rufai, are among the new politicians who emerged as candidates in the primaries of the All Progressive Congress, APC, along with the party’s serving governors in Ogun, Oyo and Nassarawa states.

The APC primaries were held nationwide on Thursday.

Tambuwal emerged candidate of the APC in Sokoto State, after clinching 3, 566 votes. About 4,000 delegates from the 23 local government areas and 244 wards in the state, were present at the voting which held at the Giginya Memorial Stadium.

State In Lagos State, Akinwunmi Ambode, clearly beat over 13 others at the primaries held at the Onikan Stadium Lagos.

Other aspirants were Kola Hamzat who came who second with 1201 votes; Ganiyu Olanrewaju Solomon with 272 votes; Supo Sasore, who was believed to be the incumbent governor, Babatunde Fashola’s candidate with 121 votes; former Lagos Commissioner for Health, Leke Pitan with 112 votes; Tola Kasali, 69 votes; Tayo Ayinde, 17 votes and Adekunle Disu, 9 votes.

In Enugu state, chairman of the APC, Ben Nwoye, said the members unanimously adopted the candidature of Okey Ezea.

Governor Ibikunle Amosun was the sole aspirant in Ogun State and so he easily secured 3, 861 votes.

However, his deputy, Segun Adesegun, announced his decampment to the new Social Democratic Party, SDP, on which platform he intends to contest the governorship seat with Amosun.

“I want to formally inform you today that I have formally joined the Social Democratic Party, where I will contest as one of the governorship aspirants. Today I have with me some leaders of the party. We have gone round the 20 local governments in the state, and I am happy with the response from the people; I believe the party will move the state forward,” Adesegun said.

At the party’s primary in Oyo State, governor Abiola Ajimobi polled 4,662 votes to defeat his only challenger, Ayobami Lam-Adesina, son of a former governor of the state who polled only 22 votes.

Governor Abdulfatah Ahmed emerged sole candidate of the APC in Kwara State with a total of 3,016 votes.

The incumbent governor was about two months ago endorsed by his political godfather‎, Bukola Saraki, for second term because of his believe that he performed very well and that he is trusted and loyal.

In Nasarawa State, Governor Umaru Al-Makura scored 1,630 out of 2,543 votes to emerge the winner thus securing the ticket to contest for a second term in office.

The delegates in Zamfara ratified the candidature of Governor Abdulaziz Abubakar Yari as the APC candidate for the 2015 election. Yari was unopposed at the primary election which held at the Trade fair Complex in Gusau.

Similarly, the Yobe State delegates of the party unanimously endorsed Governor Ibrahim Gaidam as the party’s candidate for the 2015 general elections.
The decision was reached after an unopposed primary election held in Damaturu, sequel to his polling a total of 2,219 votes cast to affirm his ticket.

The venue of the primaries remain rowdy with a mix multitude of political tugs; but there is a heavy police presence to stem occasional uproars.

Lekki Shooting: How protester lost his leg to soldier’s…