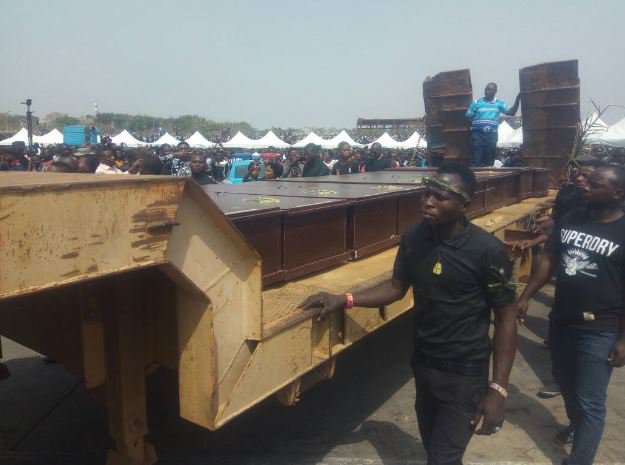 It rained tears in Markudi, the Benue State Capital, on Thursday as victims of the recent herdsmen attacks in the state were buried.

Trucks conveyed dozens of coffins to the ground where a funeral service was held for deceased – more than 80 of them – most of whom were killed in an attack by armed herdsmen on January 1 and 2.

Offices, schools, banks and markets were closed, as Samuel Ortom, the State Governor, declared a work-free day in honour of the victims.

Ortom also declared a three-day mourning period for victims of the attacks.

Residents of the state expressed sadness at the unfortunate attacks, and called on the Federal Government to ensure the protection of lives and property of the people.

Some say they remain apprehensive as nobody knows when the next attack will happen, given that this is not the first herdsmen attack in the state.

“We are mourning today; we still don’t know tomorrow,” Thomas Shima, one of the residents who attended the funeral service, told NAN.

Ortom has accused a faction of the cattle breeders association called ‘Miyetti Allah Kautal Hore’ of orchestrating the massacre.

He said the group had threatened to oppose the anti-open grazing law, which was recently signed into law in Benue State.

Speaking after an audience with Buhari, Ortom said he informed the President that the “leadership of Miyetti Allah Kautal Hore had earlier threatened (the state) and I accused them directly”.

“Since June last year, I have been writing to the leadership of security agencies, that these people are a threat to our collective interest and they must be dealt with,” Ortom said.

“They must be arrested and prosecuted because we cannot allow impunity to continue to thrive.”

President Muhammadu Buhari had ordered Ibrahim Idris, Inspector General of Police, to relocate to Benue State and personally coordinate the operation to apprehend the killer herdsmen.

Why reporting terrorism is an unsavory beat in Nigeria