The truth fights back in Nigeria

What? Fake news has infected Africa’s biggest election via WhatsApp Why now? It turns out there’s an antidote, and the election is tomorrow

What do the following have in common?

Answer: they’re all hoaxes, and they’ve all been rumbled.

Spare a thought for the Nigerian vote; the lowly ballot paper that’s supposed to chip away at graft and special interests and replace them at some point with real representative government and the rule of law.

That vote is being cast tomorrow [Saturday]. An electorate of 84 million will decide who governs Africa’s most populous democracy for the next four years. The incumbent, Muhammadu Buhari, promised a meaningful campaign against corruption and failed to deliver. His challenger, Atiku Abubakar, is a former vice-president and, he claims, a self-made billionaire.

Democracy in Africa is already under threat. For the past decade, Russia and China have been muscling in, making the case for autocracy over democracy with cash, loans, guns and engineering projects no Western government has seen fit to fund. At the same time, voters have been cruelly betrayed in Zimbabwe, Congo, Uganda and Angola.

If these trends were not enough to kill off hopes of a democratic revival, Silicon Valley has often seemed poised to administer the coup de grace. WhatsApp, in particular, owned by Facebook and the most popular social media platform in Nigeria, has been used by both sides in this campaign to spread fake news with immeasurable effect. It’s the new battleground in Nigerian politics. For voters this means making a well-informed choice won’t be easy.

Some of the hoaxes have been comical, some sinister. Any of them might have gained enough currency to tip a close race one way or the other. But something remarkable has happened. Many of them have been publicly and comprehensively debunked.

In anticipation of the misinformation threat, collaborative efforts have been set up to expose false claims. CrossCheck Nigeria, which I work for, is one such project (there are others). Funded partly by Facebook, it involves more than 40 journalists from 15 Nigerian newsrooms working together to combat fake news by using tools like Google’s reverse image search to detect and verify messages, videos, images and voice notes.

This is not about policing the open web. It’s harder than that. WhatsApp groups are private networks and the platform’s end-to-end encryption means you can’t see inside unless invited in. It also means these networks function as echo chambers in which members tend to reinforce each others’ preconceptions, and it makes the big picture – who’s spreading what sort of fake news where – extremely hard to map.

Nigeria is not alone as a focus of fake news; nor in fighting back. Growing concern over political misinformation has prompted similar initiatives elsewhere. Examples include Comprova in Brazil, which received 70,000 tips on WhatsApp and debunked a total of 147 claims during last year’s presidential election. The Indonesian government, ahead of presidential elections in April, has hired a team of 70 engineers to fight fake stories and threatens to ban Facebook if things get out of hand.

CrossCheck has so far been able to debunk around 20 claims deliberately shared by campaign officials of Nigeria’s two major political parties: the People’s Democratic Party (PDP) and the All Progressives Congress (APC). Other purveyors of fake news include support groups and, frequently, unsuspecting citizens who forward whatever they are sent. 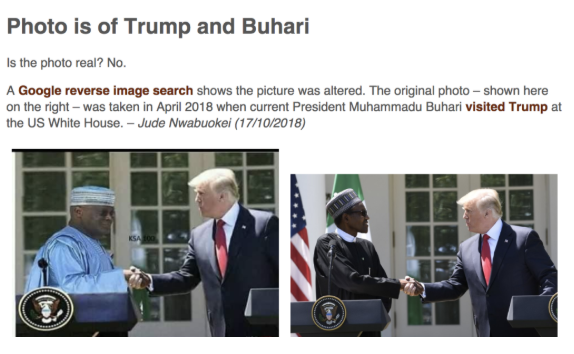 In a country of high smartphone penetration and willing sharers, many of them young and under-employed, this would have been a recipe for misinformation on steroids. Indeed, much will have gone undetected given that WhatsApp is by far the most popular messaging app among Nigeria’s 19 million social media users. Even so, the debunkers have become part of the story of this election, and we’ve been busy.

What is WhatsApp doing to fix the problem?

Last year, WhatsApp earmarked $1 million for research into misinformation. Of that, $50,000 has gone into a collaborative research project between with the University of Birmingham and the Centre of Democracy and Development West Africa. WhatsApp’s parent company, Facebook, has also contributed $67,000 to another mythbuster, Africa Check, and says it donates advertising credits to raise awareness about misinformation.

After unverified WhatsApp messages were linked to a spate of mob lynchings in India last July, the platform decided to introduce a limit on the number of times a message can be forwarded. It has also built in a feature that alerts users to forwarding.

For a half-trillion dollar company with $55 billion in annual revenues, Facebook’s spending to counter fake news in Africa’s biggest democracy (on its own behalf and WhatsApp’s) looks paltry. But is it enough, in any case, to leave the fight against misinformation to the platform, whose priority is to avoid gaining a reputation as an enabler of anonymised liars? Few users know how to block a number on the platform. It certainly could be easier. There are also calls for WhatsApp to examine the metadata it is legally compelled to collect so that it can help to identify the primary sources of viral messages.

“Closed messaging apps are becoming increasingly popular around the world, partly because they are data lean, and they make it easy to connect with different people in small trusted groups,” says Claire Wardle, of First Draft, a non-profit that helps journalists working to expose misinformation. “But we see evidence that misinformation tends to travel quickly on these apps, partly because there are few cues to help discern credibility, beyond the fact that it was shared by someone you know.”

Perhaps so, but Nigerian voters seem to be learning fast. “We are seeing people referring to themselves on social media as ‘influencers’ but Nigerians have renamed them ‘influenza’,” says Rosemary Ajayi of the Digital Africa Research Lab.

It’s too soon to know if fake news spread via WhatsApp will materially influence tomorrow’s vote, but at least misinformation is no longer going unchallenged. Could Nigeria’s voters in 2019 in fact be worldlier than America’s in 2016? That’s one for the psephologists on Monday morning.

This piece was first published by Tortoise Media.