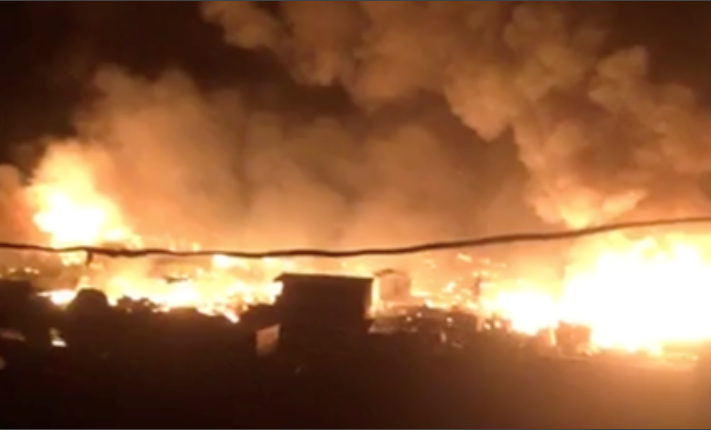 A scorching blaze that turned a crowded neighborhood of Sierra Leone’s capital city into rubble and ashes has left an estimated 4,500 residents homeless, with many searching for missing family.

The inferno, which broke out on Mar. 24 between 7 and 10 p.m. in Susan’s Bay, devastated a community of struggling families, mostly fishermen and petty traders, according to Save the Children in a report.

“I have lost all my uniforms – all was burnt in the fire. Right now we are taking exams and I didn’t go to school today because I have nothing,” said 16-year-old Musa (not his real name), who needs a uniform to be allowed to attend school. “My shoes, everything got lost,” he told Save the Children.

It is not clear what could have started the fire, wrote Abdul Rashid Thomas, reporter for the Sierra Leone Telegraph, but such an outbreak is not unusual in densely populated and overcrowded communities where houses are made of pieces of timber and metal sheets. Many households use kerosene lamps to light up their homes, he said. The community covers an area of 24 acres or 10 hectares.

“Devastating to witness yet another fire disaster in the wake of six others in recent weeks,” Freetown Mayor Yvonne Aki-Sawyerr was reported to say. “Once again, there was no access for the fire service. A six-storey building under construction at the Guinea Store entrance to Susan’s Bay blocked what access there would previously have been from that end.”

“Disaster risk reduction cannot happen without effective urban planning and a building permit regime which is focused on reducing environmental and man-made risks,” she continued, adding: “Please join us in praying for the victims”.

In the global ranking of natural hazard risks, Sierra Leone is ranked as the third most vulnerable country due to climate change, un-planned development and urbanization.

Last November, at the launch of the African country’s National Disaster Management Agency, World Bank country manager Gayle Martin stressed the importance of accountability, prudence and transparency in managing funding and other resources.This comes as investigative reporters at the Africanist Press say they have uncovered bank wire transfers showing that over three million leones, the local currency, was withdrawn by President Julius Bio and his wife Fatima Jabbe Bio for travel expenses in 2020 despite bans on international travel due to the coronavirus pandemic. The President and his wife could not be reached for comment.