MORE than 90 days after the Federal Government launched its Open Treasury Portal (OTP)  for government ministries, departments and agencies to upload their daily financial information on procurement, the portal has not been updated since January 2020, The ICIR can report.

The Federal Government on December 9, 2019 launched the OTP in a bid to demonstrate transparency and accountability in the management of public sector finances.

During the launch of the portal, President Muhammad Buhari who was represented by  Omotayo Alasoadura, Minister of State for Niger Delta Affairs directed the Office of the Accountant-General of the Federation to publish daily treasury statements.

“The Accountant-General of the Federation (AGF) must publish a daily treasury report which will provide information about what comes into and what goes out of the national purse every day,” Alasoadura had said on behalf of the president.

The published information is expected to include the MDAs responsible, the beneficiary, the purpose and amount of each payment.

Findings by The ICIR however, revealed that the directives and the excitement that greeted the launch of the portal have waned as it is over 70 days that there have been no update of contents on the portal. 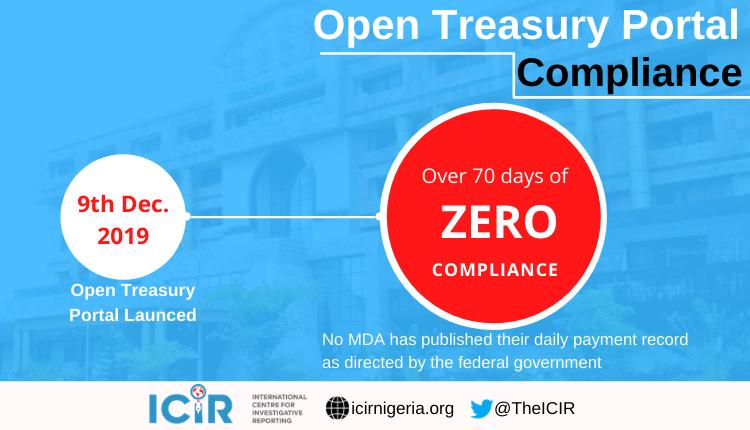 But none of these is currently available on the portal when The ICIR checked. For instance, in 2018, datasets of daily payment report showed that the portal has reports of just four months or last quarter of that year. The reports were those from September to December.

In 2020 which is the current year, and which is over 70 days after the launch of the portal, no reports have so far been published. In fact, the 2020 button when clicked links back to the homepage of the website.

It would be recalled  that the 2020 budget was passed and assented to by the National Assembly and the President respectively in December 2019.

In other words, implementation of the budget started in January 2020 during which most MDAs have started spending from their various budgets.

Lack of sanctions responsible for  foot-dragging the initiative —CSOs

Nkem Ilo,  Chief Executive Officer of the Public and Private Development Centre (PPDC) described the government initiative on open treasury as a good one. She however,  said lack of a follow-through process has hampered the implementation of the initiative.

“Take, for instance, it comes as a high-level policy of the government, we are part of the Open Government Partnership (OGP), they want to disclose information, we want to be able to put out public expenditure information so that every citizen can track it, ” Ilo said.

She explained in an interview that public expenditure information is a critical part of any governance system “because that is where the majority of the services government provides go through.”

“So from the budget down to procurement down to the contracting, and when you have this daily payment information being uploaded, people are able to see what is being provided by the Federal Government to the MDAs and the MDAs are able to share what is being provided for what and at what time to the contractors. These are useful information and it is something we should applaud.”

Ilo was however, worried that it was shameful that while the Federal Government’s disclosure as at 2019 was available, ministries, departments and agencies were not defaulting in uploading details of their financial transaction.

“It is shameful that as at 2019, you can only find Federal Government’s disclosure, no corresponding disclosure from the MDAs and it makes you wonder, what was the purpose of the Federal Government through its principal agent, that is the President saying this is now an initiative of the government.

“People are big brother eyes for the government. It will also be good for the federal government to take feedback from the citizens because citizens are the ones using the portal in addition to every other stakeholder and if they can take that kind of information.”

Edetan Ojo,  Executive Director of the Media Rights Agenda (MRA) said it is a cartel of the behaviour of government to adopt initiatives that have the potential to improve governance and result in better service delivery for citizens but are never really implemented.

According to him, the government is fond of coming up with initiatives without proper implementation while also blamed the citizen for failing to hold government accountable for its words and actions.

“We see a pattern of adoption of policies but we do not realise the benefits because we never really implement them the way it is supposed to be. We can go through a long list of such initiatives, including the OGP itself where they are supposed to take certain steps to open up governance, reform governance,” Ojo said.

Ojo insisted that: “If we continue like that, from time to time, we will have these meaningless initiatives that are signed on to and perhaps, money spent on them, but the benefits never manifest.”

But he added that it is important for the civil society and the media to really play that watchdog role to look at all the commitment government is making ‘to be more accountable, to be more transparent and open and to provide services and benefits to people and insist that it lives up to these commitments.’

“It is also important that there should be a reward and sanction system for performance and failure to perform. Once there are no consequences for non-performance, then there are no incentives for officials who are supposed to things.

“We also see it in the Freedom of Information Act implementation where there is sometimes noncompliance to the provisions of the Act that are mandatory and there are no consequences. This behaviour encourages impunity,” Ojo said.

No response from the OAGF

When contacted for reasons the portal has not been updated, the Office of the Accountant General of the Federation that is responsible for populating the portal was not forthcoming with response.

The ICIR was referred to the Government Integrated Financial Management Information System (GIFMIS) department by the Director of Press at the OAGF on Thursday, 27 February when the reporter visited him.

The Communication Officer in the GIFMIS department requested that The ICIR write officially to the OAGF requesting that an interview be granted to the reporter who visited him after he had listened to the questions. He went on to say that he was the right authority to speak to on the matter but he cannot speak unless he gets the permission of the AGF.

In a letter dated March 2, 2020, and acknowledged, The ICIR  wrote to the OAGF requesting for an interview session on the matter, as of March 9, the OAGF was yet to respond to the letter.

13 years after, govt agencies yet to fully implement…