ON Saturday, June 12, 2021, many Nigerians across multiple locations took to the streets in protest against the Federal Government’s inability to tackle insecurity and economic woes in the nation.

As a result, the hashtag #June12thProtest trended on the social media.

June 12 is marked as Democracy Day in Nigeria.

Among those using the hashtags were some individuals who alleged that Twitter, or its CEO Jack Dorsey,  had changed the like and retweet button to green or the Nigerian flag in solidarity with the protest.

A search conducted by the FactCheckHub on Twitter using the phrase ‘Like button changed’ showed results [archived here] of multiple tweets making the claims.

Twitter or its CEO Jack Dorsey changed the like and retweet button in solidarity with June 12 protest.

Checks by the FactCheckHub showed that the claim was false. 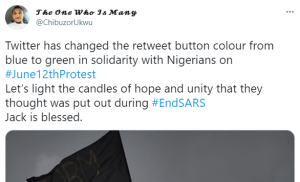 A Twitter user with the username @ChibuzorUkwu tweeted that the retweet button was changed from blue to green.

“Twitter has changed the retweet button colour from blue to green in solidarity with Nigerians on #June12thProtest’ Let’s light the candles of hope and unity that they thought was put out during #EndSARS. Jack is blessed,” his tweet read.

The Twitter retweet icon colour prior to June 12 was green and it is still green.

Findings revealed  a noticeable change was made to the retweet option colour  in 2016 and it has since been returned to its default green colour.

The FactcheckHub traced the original Tweet and found that the claim is false. The tweet had showed the default red heart when liked.

Furthermore, the FactCheckhub fact-checkers liked multiple tweets with the hashtag #KeepItOn and #June12thProtest but it did not change into a flag.

The Factcheckhub observed that the same person or a group of persons was behind this misinformation.

For instance the screenshot of tweets with flags as like icon in circulation had Provii [@provii8],  @urpapapadeycraze, and David of FCT [@Dhavidote] as the alleged accounts.

A red flag that the images were manipulated was that the tweets had the same posting time of 8:29am, June 12. They also had the same number of likes, quote tweets and content.

This led to further scrutiny and the Factcheckhub observed that these accounts were interacting with one another.

For instance @UrPapaDeyCraze tweeted that the like icon changed to flag using a screenshot of Provii’s tweet. Provii came under the tweet to to ask for followers.

Dhavidote tweeted manipulated screenshot of his tweet and that of @UrPapadeyCraze.

This pattern was noticed on the two other accounts too.

The people behind the misinformation were using it to get traction and engagement. 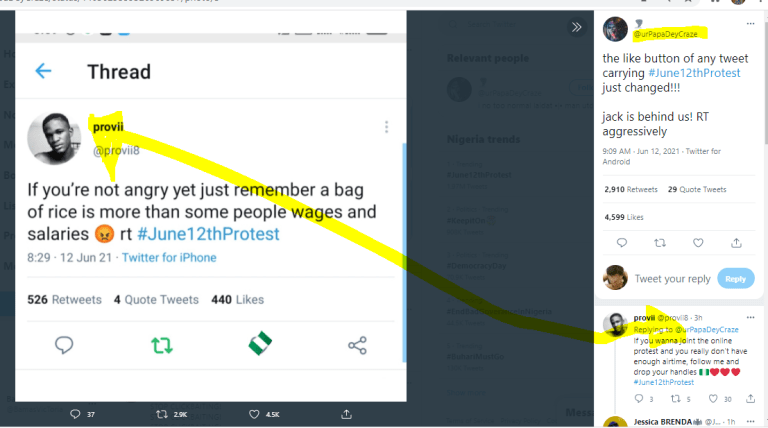 The claim that Twitter retweet and like icon changed in support of the June 12 protest in Nigeria was FALSE. Malicious actors were deliberately misinforming the public for their personal gain.